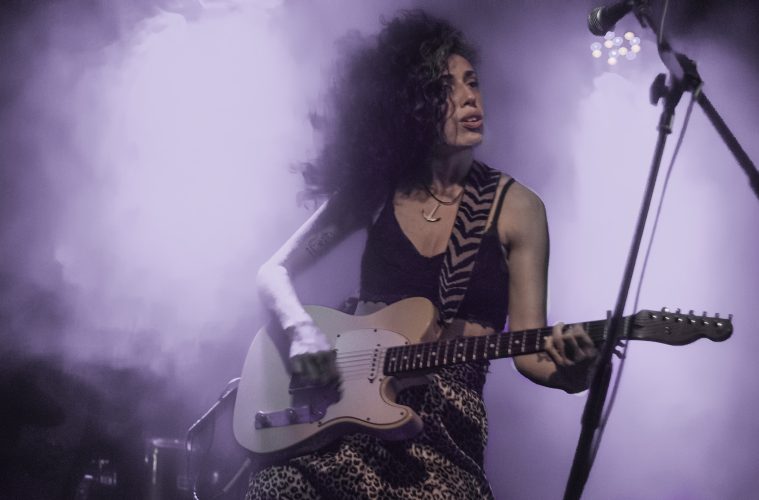 The spooky season is here and that means we’ve got some solidly dark offerings to celebrate. In this edition of the Setlist, we’re featuring some sultry folk, noisy punks and a kick-ass Halloween party.

I’m over the moon about this announcement.

The phenomenal Julia Zappa is presenting her first album, Un Incendio General, with a large band and special guests.

I heard about Julia when she released one of her first singles back in 2021, “Nuestras Deseos”, a fantastic combination of folk/tango-style music with driving passion and rhythm. I was lucky to witness her live playing at Bebop club not long after and was enthralled by the range of her voice.

Zappa truly is something else and I implore people to go check her out before she releases her first album, because seeing her live is the way to go.

Onda Vaga combines rumba, cumbia, reggae, rock and tango to create a perfect cocktail of dancey tunes to make it feel like it’s already summer despite some of the cold weather we’ve been having as of late.

They’ll be showcasing new material from their next album, but it wouldn’t be an Onda Vega show if they didn’t also feature some of their all-time classics.

Devorah is the newest project of Vero Abbattista and Fran Cañadas, a project which sees the singer joining forces with this extraordinary multi-instrumentalist.

While Devorah is brand new, Ivo Ferrer has many strings to his bow as both a musician and a visual artist. He’ll be performing as a trio alongside two good friends and promoting his latest album, Las Flores Y Los Frutos.

Singer and LGBTQ+ icon Paula Maffia will be performing off the back of the latest single she released with Mariana Vázquez, “Volcán.”

Maffia, a founding member La Cosa Mostra and Las Taradas, makes music that can be described as a mix of contemporary rock and folk with a heavy emphasis on emotional lyrics and utter fierceness.

Then we have Juan Ibarlucía, a member of Pommez Internacional who launched his own solo project in 2021 and has collaborated with Maffia as well. He’s slowly been releasing singles and it will certainly be exciting to see his trajectory.

Ana Capalbo is an actress, singer, musician and composer. For more than ten years, she’s been combining these three art forms and developing her stage presence.

The supporting artist, Ceretti, is currently working on their first album, produced with Argentine pop musician Matt Montero and producer Agustín della Croce, member of Piscis Machine and a former member of Ahora.

Las Eras flew in my orbit after one of our fantastic writers, Eze, did a brilliant profile on the band which immediately had me hooked. The band waltzes between darkwave, post-punk and gothic tones to a mix of robotic driving drums and dancey synth lines.

Utah will be delivering a hypnotic, dark electronic project which blends ambient tracks along with more dance-heavy rhythms and certainly brings about a feeling of needing to be in a dingey, low-roof dive bar to appreciate its full gravitas.

And finally: Visceral. It’s a rather fitting name for this experimental noisy act, which at times borders Gabber and Hardstyle. It’s this aggressive and bold energy which defines the group and makes their performances a hell of an experience.

We’ll be featuring a bunch of local artists who will be playing some crazy covers followed by a DJ on the rooftop to take us through to the early hours.

As of Tuesday evening, THE PARTY IS FULL. Thanks to everyone who signed up. We can’t wait to see you there!

If you didn’t RSVP in time, you can still sign up here to get on the waiting list and find out about future events. (And if you DID sign up but can no longer make it, please let us know ASAP so we can let others in.)

A classic display of tango by Lore Toso accompanied by pianist Pablo Fraguela will be taking place in the mighty Lucille this Saturday.

Toso will be showcasing her newest concert, …y sin embargo te quiero, taking you on a tango journey through the history of the locally born and bred genre.

It’s sure to be a lovely evening of classic Argentine music.

Dani Ferretti is an independent singer-songwriter who has just released his brand-new video and single, “Lo Que Se Daba.”

In addition to its characteristic Weissenborn (Hawaiian slide guitar) sound, he incorporates elements of Argentine Norteño music. With songs that reflect deep emotions, Dani will be giving a sneak peek at some of the material which will appear on his next album, set to be released in 2023.

Ferretti will be supported by Daniel Arena, a singer-songwriter who also plays the Weissenborn, in addition to his classic acoustic guitar.

His songs have a great atmospheric appeal, taking you to quiet places and serene landscapes. He’s releasing a new EP called IO and will be playing some of those new songs this very evening.