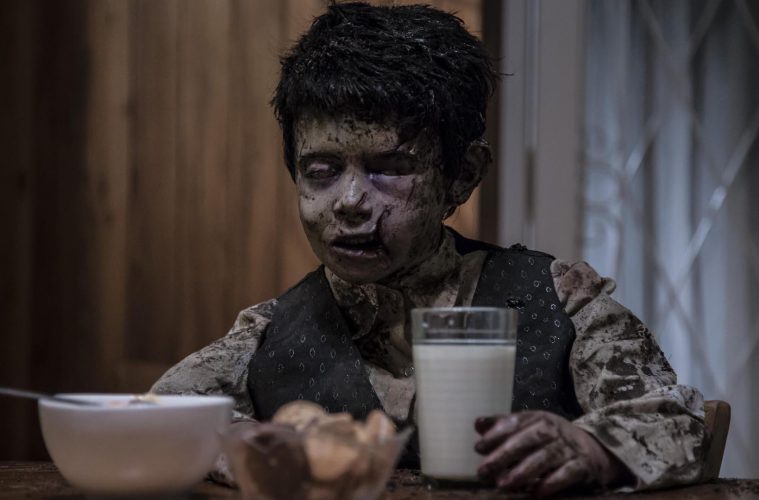 Aterrados, the Film That Put Argentina on the Map of International Horror

Welcome to the second edition of La La Lista’s new column celebrating local genre cinema. In the first installment we talked about Plaga Zombie (Pablo Parés & Hernan Saez, 1997), my first exposure to independent film and a film that, in a way, kickstarted a new era of local independent genre cinema.

On this occasion, we’re discussing a film that is on the other end of the spectrum in terms of production values and promotion: Aterrados (English title: Terrified), directed, written and scored by Demián Rugna. The film was fully supported by Argentine Film Institute, and won the Blood Window contest. Thanks to this victory, the film was able to be shot and edited in a short period of time.

I’ve heard people refer to the film as the Argentinean version of Ari Aster‘s Hereditary, an apt but unusual comparison since the American “elevated horror” film was released a year later. Is it then more accurate to say that Hereditary was the American version of Aterrados? Let’s dig in and find out.

Demián Rugna studied Image and Sound Design at the University of Buenos Aires. He directed several short films – in fact, Aterrados is something of a by-product of the short film Tienen Miedo (2002) (though Rugna has stated in several interviews that the annoying noise of a neighbor’s remodeling also inspired his work on Aterrados).

Rugna also directed three full-length films: No Sabes Con Quién Estás Hablando (2016), Malditos Sea! (co-directed with Fabián Forte, 2011) and The Last Gateway (2007). All three films are highly recommended, though none of them managed to have a great run at festivals or commercial theaters.

But Aterrados broke records. A single screening at Mexico’s Morbido Fest earned the film an award that ensured its commercial release in Mexican theaters, which was a tremendous boost to its stature in Latin American film. The film also won the award for best Ibero-American film at the Fantaspoa fantasy festival. And in Argentine soil, the film had sold out screenings at the Mar del Plata International Film Festival as well as the Buenos Aires Rojo Sangre festival, where it won Best International Feature Film.

In fact, in a way, Aterrados served as a turning point for Buenos Aires Rojo Sangre, as it was the film that managed to attract a wider audience for the niche festival. All of its screenings were sold out. It lasted five consecutive weeks in theaters and was part of Netflix’s catalog for several months.

And if there was any question about the film’s success, it’s one of the few Argentine films to earn itself an American remake, which is currently being worked on by none other than Mexican director Guillermo Del Toro. Talk about horror royalty.

So what’s the movie even about? Let’s have a look at the synopsis.

A Buenos Aires neighborhood becomes the epicenter of a series of paranormal events, from strange noises to atrocious deaths. Not only that, but the corpses often return from their graves. Commissioner Funes and three specialists in parapsychological phenomena decide to investigate, but the revelations will test each one’s endurance.

The cast includes Maxi Ghione in the role of commissioner Funes, who adds a touch of humor with his extreme skepticism. Elvira Onetto and Norberto Gonzalo also star as two paranormal investigators.

One of the outstanding elements of Aterrados is the way the whole story is orchestrated. We encounter a character who, as a flashback, will tell us three stories that intertwine with each other and then unravel only to finally come together again. The first story is perhaps the one with the most powerful climax of the three, where the tranquility of a neighborhood is interrupted by loud knocks coming from a bathroom (I don’t want to go into details).

The second is perhaps the most frightening; for a while it caused me to constantly look under my bed before going to sleep. The third tells of an infanticide. The particularity of the three stories is that they take place in a lost street in Haedo, which serves as a sort of communicating vessel between two opposing worlds.

These three stories will mix and feed each other as the plot progresses. The story brings into play the unknown that seeks to be understood through our investigators, a sort of modern ragtag Ghostbusters. It also displays different types of terrors that haunt us and that, depending on our own personal constitutions, we give more or less importance to, but in the end nourish our stories. Aterrados is a film that overflows with love for genre cinema. It is full of little nods to other horror classics like Pet Sematary (Mary Lambert, 1989), Paranormal Activity (Oren Peli, 2007) and Nightmare on Elm Street (Wes Craven, 1984).

It is worth noting the rhythm that Rugna imposes as the plot progresses, where he manages to interweave negative space with suspense and jumpscares. These three elements are supported by the main character, commissioner Funes, with whom the audience will empathize the most, as he is the most developed character throughout the plot.

Aterrados is the best Argentine genre film made so far. And if “best” sounds a bit hyperbolic, we can perhaps agree that it’s the film that puts us on the map of horror cinema. It is the film we needed to show that we have the potential for good local horror cinema and that we have great stories to tell. And director Demián Rugna undoubtedly consecrated himself in the hall of fame with other exponents such as Narciso Ibañez Menta, Pablo Parés, Daniel de la Vega, among many others.

If you are looking for something to watch this Halloween and feel like trying some local horror, Aterrados is a great recommendation.