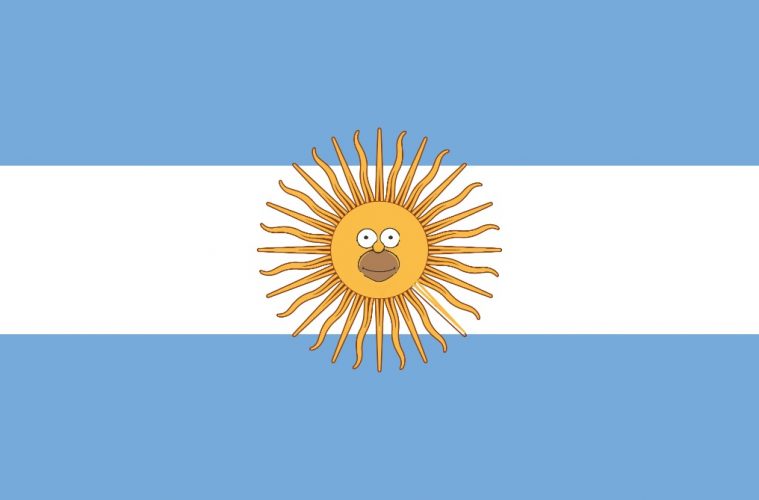 I remember the first time I really took note of the enduring influence of The Simpsons in Argentina. It was my third or fourth month in the country and I was still very much in “tourist” mode, observing its quirky idiosyncrasies through a lens of detached bemusement. I remember making my way down Florida street and passing street artist after street artist, and noticing a face that popped up just as often in their wares as the more traditional Maradonas and the Evitas: the wide-eyed, dumbfounded visage of Homer Simpson.

It wasn’t just that, of course; I was already aware of the fact that, no matter the time of day, if you skipped through enough TV channels, you would eventually land on a broadcast of Springfield’s most famous yellow-skinned family. And I had already engaged in enough conversations with locals to know that Simpsons quotes make their way into everyday dialogue with just about the same frequency as standard-issue street slang.

But seeing Homer’s face depicted over and over again in various art forms alongside historically significant figures from Argentina’s past really opened up my eyes to the true extent of the show’s tight grip on the country’s imagination.

Of course, The Simpsons are a worldwide phenomenon. With a whopping 33 seasons and 31 Emmy Awards under their belt, the show is an American pop culture institution; for a period of time in the 90s, they were the biggest thing on TV, reaching levels of ubiquity in the United States that only a handful of entertainment figures ever accomplished. They were an iconic part of the childhood of Gen-Xers as well as millennials circling the “Thirty Threshold,” and with their mix of biting satire, freewheeling absurdism, and genuine heart, they forever changed the scope of what an animated show could hope to do.

However, even as it enters its 34th season, it’s clear that the show’s star is fading in its native country; ratings have declined sharply, reviews have been decidedly mixed, and it feels increasingly outdated, overtaken in the pop culture landscape by the younger shows that it influenced (Rick & Morty, South Park, Family Guy and the like).

Talk to the average American 22 year old and they’ll likely be aware of The Simpsons. They might even say they like it. But it won’t be a foundational part of their lives like it was for someone just eight years older.

That is not quite the case in Argentina, where The Simpsons have continued to be every bit as relevant and ubiquitous as they were at their absolute fever pitch, popping up in spaces that are both corporate-driven (merchandise and marketing) and fan-driven (memes and quotes); in fact, their level of cultural permeation is such that one could call it a self-propagating phenomenon, as every reference, quote, and remembrance only ups the ante, furthering the show’s grip on public imagination. It is a cultural touchstone for a very broad age bracket in Argentina in a way that it used to be in the United States.

In preparation for this article, we ran a very thorough and very scientific (actually, not very scientific at all) survey among the Simpsons-watching population of Argentina, and we were impressed with the very clear trends among the hundreds upon hundreds of responses we received. One of the things we found most interesting is that, even in the age of streaming, an overwhelming majority of Simpsons fans were still watching the show on TV. Not only that, but they were watching the same episodes over and over and over again. That is to say, the era of the show that is popularly known as its “Golden Years” —  seasons two to nine.

The Simpsons have been on Argentine television since the early 90s, back when Argentine television pioneer Gustavo Yankelevich, in his role as artistic manager of TV channel Telefé, first purchased the broadcasting rights to the show after a screening in Los Angeles. This was what initially brought this wild hodgepodge of characters into the homes of millions of Argentines, who embraced them with wild enthusiasm. The show garnered impressive ratings, and was soon being quoted by every kid on every block.

Eventually, Yankelevich’s succesor, Claudio Villarruel, made the decision to air the show as a five-hour marathon every weekend. By that point, the show – with its colorful cast of characters, its irreverent attitude toward societal standards, its wacky wordplay and non sequiturs – had become truly ingrained in the popular consciousness. Every weekend, you could count on turning on Telefé and letting yourself settle into the familiar rhythms of classic Simpsons episodes for several hours.

It was like an early, more passive form of binge-watching. And when Telefé unexpectedly cancelled this weekly marathon, their Facebook page was overrun by outraged fans, flooding every comment thread with Simpson memes, until the network reversed its decision.

Of course, The Simpsons that people watch in the US is not the same Simpsons they watch down here. Show a typical Argentine an original episode of The Simpsons as it aired in its native country and they will recoil with disgust. That’s because the version that has aired here for years is the Latin American dub, with a cast of voice actors that are largely from Mexico. Characters like Homer, Moe the Barkeep and Krusty the Clown have a clear Mexican accent and a very specific cadence and delivery. And though Dan Castellaneta’s dopey Walter Matthau facsimile came first, it is Humberto Vélez’s slurred, over-the-top mercurial version of Homer that will forever define the character in Argentina.

It’s an inevitable consequence of being so familiar with a very specific version of the show: Argentine audiences are so used to the dubbed versions of the characters’ voices that hearing any other version will sound…  wrong. In our survey, a whopping 78 percent of respondents indicated that they just can’t bring themselves to watch The Simpsons in English.

It’s not just the voices, either. Roughly 40 percent of respondents stated that the show is simply funnier in Spanish. This speaks to the quality of The Simpson’s dubbing; a show so densely populated with hyper-specific pop culture references seems bound to lose a lot of its spark when localized to a different region. However, the team behind the script adaptation was able to fundamentally transform some of the jokes, often losing their literal meaning while staying true to the show’s spirit.

The adaptation also sometimes result in some of the jokes having a more surreal feel than they were originally intended. A good example of this is the iconic line from Marge vs. the Monorail, when Homer proudly shows Marge the family of opossums that live inside the monorail. In English, the line is “I call the big one Bitey.” This makes sense because, well, opossums bite, and the humor in the line comes from the notion that Homer was bitten by the opossum at some point.

In Spanish, the line is translated to “a la grande le puse Cuca” (“I named the big one Cuca”). It’s a weirder, less logical line, because there is no special significance to the name “Cuca” beyond simply being a silly name to give to an aggressive, sharp-toothed marsupial. The Argentine blog Simpsonitos does deep-dive examinations of the jokes that were altered (and sometimes sacrificed) when translating the episodes into Latin American Spanish. And though the writer of this article maintains that this is evidence that the show is simply better in English, he is clearly in the minority on that one.

As part of our survey, we asked fans to share the lines from the show they quote the most. Funnily enough, “a la grande le puse Cuca” turned out to be the number-one most quoted Simpsons line, followed closely by Mr. Burns’s diabolical “excelente,” and Ned Flanders’s cheerful “perfectirijillo!” Some respondents went on to list upwards of 40 Simpsons catchphrases they pepper into their everyday conversations. I’d be skeptical of that claim if it weren’t for the fact that I know so many people here who would do exactly that.

So why does a show about a working-class American family resonate so much with the Argentine audience? I tend to believe it’s a combination of things. Number one: the writing, which combines satire, absurdism, and irreverence punctuated by moments of poignant sincerity, seems tailor-made for the Argentine sense of humor. Number two: the character of Homer Simpson, a flawed but fundamentally decent man with relatable struggles and a lovable dimwittedness. And number three: the sheer scope of the show, the many facets of everyday life it’s parodied, the many everyday situations they’ve depicted.

These transcend their origins as pieces of American life and can be applied more broadly to cultures around the world. There’s a reason another popular use of Simpsons imagery is to skewer politicians in the form of memes.

When asked why they think The Simpsons resonate so strongly, one respondent offered: “They are us. Even though they are yellow and fictional and from the United States, the Argentine experience is not that different, and sometimes seems even more ridiculous than the situations they represent.” When you stop and think about it, it makes sense: the people of Springfield have been through almost as much ridiculousness as Argentines. Just have a quick look at the local headlines.

The quality of the writing on the show may have declined dramatically in recent years, and yeah, it may feel like a hollow facsimile of what it once was… but they’re still a part of us. I, for one, will be tuning in on Saturday, probably in the midst of a throbbing hangover, to watch the same group of episodes I’ve already seen a dozen times before, letting myself be soothed by the friendly and the familiar.