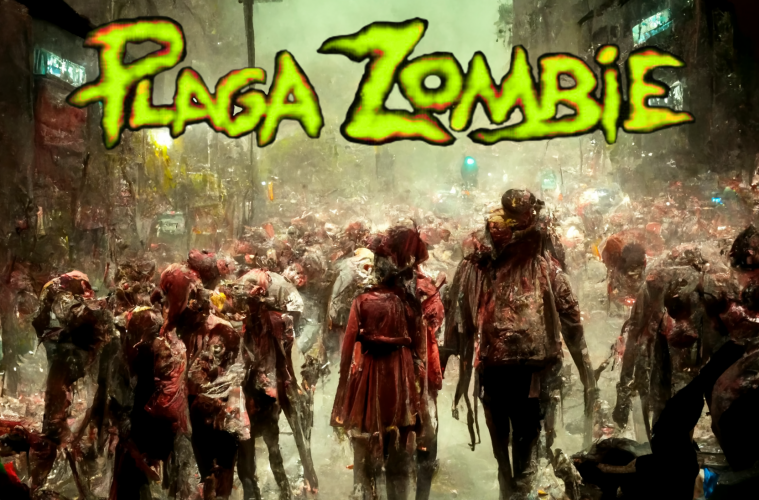 For as long as I can remember, I’ve been a VHS loyalist. In fact, my parents owned a video store named Calypso for several years. Raised on this medium, I began to develop a fascination for gore and horror. I became acquainted with Lucio Fulci’s Zombie, a 1979 film, which opened my eyes to other directors like Romero, Peter Jackson, Mario Bava, Tom Savini, Tobe Hooper, Paul W. S. Anderson, Neil Marshall, and many more. Of course, all of them dubbed to “neutral Spanish” and all of them on VHS.

As a fan of the genre, I always dreamed of making my own zombie movie, but I saw it as impossible due to the large budget, the amount of people required, practical effects and many other reasons. It felt completely out of reach.

All this changed during one of my visits to Buenos Aires, back in 2012. I was talking to my cousin about my studies and the desire I had to write or direct a zombie movie, were it not for the lack of proper financing. That’s when he asked me if I had seen Plaga Zombie. I was able to find this gem on YouTube. It’s uploaded on the channel of Farsa Producciones (pioneers of the independent bizarre and horror genre in Argentina). You can watch it here:

Plaga Zombie is a 1997 film by Pablo Parés and Hernan Saez. As much as I loved it, I was bummed it took so long for me to come across it. I would have loved to be part of those original screenings, of that small group of horror nerds looking for national independent horror films in the 90s and 2000s. Already trying to find independent films in a pre-Internet world was extremely difficult, let alone local horror. It must have been an odyssey.

First, some context: Argentina in the late 90s, early 2000s. Although the crisis that would eventually engulf the country hadn’t quite happened, some signs were already present. It was known that it was not easy to make ends meet, but people preferred not to talk about it. It was not shown. It was hidden. And that is where the famous NCA (Nuevo Cine Argentino; New Argentine Cinema) arose, a movement that came to represent social transformations. It sought to break with linearity and play with luck and chance. Letting the unexpected reign, which also reflects the realities of the world at the time; you really couldn’t tell what was about to happen. It was like our own Nouvelle vague and Italian Neorealism at the same time.

In short, this movement/cinema came to examine that reality, to give a voice to that sector that was made invisible by society. Some outstanding titles from this period are Pizza, Birra y Faso (1998, Adrian Caetano), Bolivia (2001, Ulises Rosell) and Okupas (2000, Bruno Stagnaro). The list could go on.

With all this context in place, we can talk about Plaga Zombie, a movie directed by two 17 year old kids: Hernan Saenz and Pablo Parès. Accompanied by a large ensemble of friends and family (70 people in total) who dared to participate in a project with a total budget of $600 ARS. Today this would be around $94,000 ARS. For a 90 minute film full of practical effects and a giant cast, it yielded some incredible results.

The film was shot entirely in Haedo, Province of Buenos Aires, and it was filmed chronologically so editing would be easier. Remember, back in those days not everyone had editing software at the ready, or even a home computer. They filmed everything sequentially to keep editing to a minimum. In this sense, the editing was done with the camera itself.

The film is an adventure full of practical effects, wonderful dialogue, zombies, gore, a wrestler, a gardener, and a trekker. But above all, it’s a film filled with the enthusiasm of a group of friends who spent entire afternoons dreaming up how to make the Argentine version of The Toxic Avenger (Lloyd Kaufman, 1984) or Bad Taste (Peter Jackson, 1987). This film is a true reflection of local genre cinema, a group of kids making the cinema they consumed as children and mixing it with the cinema they later chose to continue watching. This is Plaga Zombie.

The film is about a group of friends made up of a wrestler (Berta Muñiz), a gardener (Pablo Parés) and a trekker (Hernan Saez). The three of them have to defend the earth from a devastating alien invasion that seeks to annihilate the human race by turning them into zombies. The story follows these three friends who fight bravely with the help of household tools, ranging from garden scissors, homemade potions, and even a homemade defibrillator. All this adventure brings back great memories of films like Evil Dead (Sam Raimi, 1981) and Braindead (Peter Jackson, 1992).

Dialogue is a key element. This was a generation who consumed the best science fiction, horror, and action movies through VHS or Telefe’s super action Saturdays. Great films such as Rambo (Jerry Goldsmith, 1982), Rocky (John G. Avildsen 1976), Tremors (Ron Underwood, 1990), among others, were presented in a language we all know very well as the famous “neutral Spanish” (a language that obviously does not exist, but was created to unify the entire Latin American market under the same banner). As a result of this, the film’s characters speak in this affected Spanish, a sendup of the films the filmmakers grew up watching. Additionally, our three characters are named Bill, John and Max. I don’t want to go into details, so as to avoid spoilers.

This film is the first of a trilogy: Plaga Zombie, Plaga Zombie: Zona Mutante (Hernan Saez, Pablo Parés, 2001) and Plaga Zombie Zona Mutante: Revolución Tóxica (Pablo Parés, 2012). The second one is undoubtedly a much more complete installment – not because of the plot, but because the increased experience of the creators, which is noticeable. The third one brings the series to a close. All three can be found on the Farsa Producciones YouTube channel.

Plaga Zombie even reached the United States, the birthplace of many of its inspirations. This was Plaga Zombie: American Invasion (Garry Medeiros, 2021), a film in which both Pablo and Hernán participated as guest directors. Currently, there is a documentary film in production titled Un Millón de Zombies (Nicanor Loreti and Camilo del Cabo); it tells the behind the scenes story of Plaga Zombie or as Pablo Parés says on Facebook: “The messy story behind the making of the PLAGA ZOMBIE saga: fights, betrayals and child trafficking in a documentary film made by Nicanor Loreti and Camilo de Cabo. We’re opening Pandora’s box!”

Plaga Zombie is a foundational film for Argentine genre cinema. As we have been saying, the INCAA (Argentine film institute) had a very clear idea about what kind of films should be financed. The BAFICI (Buenos Aires International Independent Film Festival) only screened a certain type of cinema; one that was more sophisticated and more snobbish. In this context arose Plaga Zombie, a totally disruptive cinema experience that sought to break away from the canon and tell other types of stories. The INCAA did not see a market for genre films. Plaga Zombie came to change that paradigm.

Although it didn’t do it in one fell swoop, it was the starting point for many other genre filmmakers such as Nicanor Loreti, Demian Rugna, Gabriel Grieco, Laura Casabe and many others to tell their stories. All this ended up leading to other things like festivals, such as Buenos Aires Rojo Sangre, Blood Window, Nieve Roja, 1000 Gritos and many others.

With all this together, it began to become evident that something new was emerging, that it had its audience and its market. It was something that eventually the INCAA could not keep ignoring, and began to give it a space. Although it was not on a large scale, today there is a subsidy for genre films.

For giving us a space, a voice and for showing us that genre films can exist in Argentina, thank you Plaga Zombie.