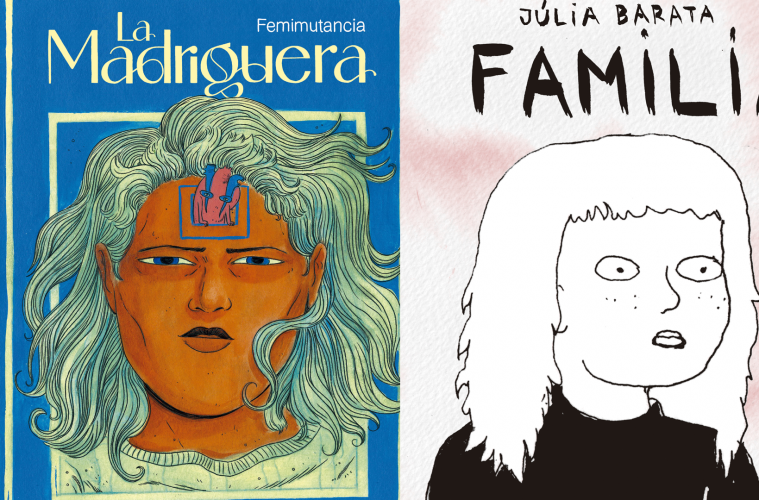 Welcome to a new installment of Ltd. Edition! We took a little vacation in order to recharge our batteries and hunt for new indie comics to analyze. And to celebrate the return of the column, we’re going to talk about two graphic novels that were published in the last few months with quite a few points in common.

Familia by Julia Barata and Madriguera by Femimutancia are new releases by two authors whom we’ve already reviewed in previous articles. In both cases, they deepens their examination of family issues with narrative and graphic styles that are as personal as the themes they explore.

Familia is the new graphic novel by Julia Barata, co-published by Editorial Sigilo and Musaraña (who released her previous book Gravidez, which we reviewed last year). In her new work, she continues the process of capturing her personal and family life, updating her illustrated diary after the birth of her son León.

Her log is far from establishing a sense of “normality” in the family or generating a sort of decalogue of rules for being a good mother. Clearly, crises and fears do not just disappear after the arrival of the firstborn, and the pressure of being a good mother attentive to the needs of her child is added to the inescapable need to be productive in the capitalist system. With only a few earthly pleasures during the rare windows of free time to counteract the constant wear and tear of the accumulated demands of daily life.

Julia Barata delves into the chaos of her daily life, which she transmits with freshness. In a style that is already identifiable and her own, the sudden multiplication of characters transmit the hectic sensation of being overworked, trying to do everything at the same time, and accumulating tensions along the way. Familia is a challenging book for anyone, parents or otherwise, since it is more about capturing that tension, that constant speed, and that overpowering feeling of looking for the light at the end of a very long tunnel of chores and responsibilities.

There is no modesty or moralizing in the story: fears, bitterness and the intermittent beauty of everyday life are all highlighted on the page, with a brutal honesty that defies the mandates of “what is right”. This questioning of every stage of her life extends to intimate experiences with her partner, where the value of monogamy and sexual desire are examined, as well as the relationship with substances (legal or otherwise) to cope with modern obligations. This also includes to the battles against the social construction that leads parents to self-diagnose as bad mothers because they cannot live up to an unrealistic standard.

Barata not only updates the author’s relationship with her partner and son, but also revisits the themes of uprootedness captured in her previous book, recording a visit to her native Portugal with her son, rekindling the questions that persist in many immigrants’ minds about their ties to their new life vs. where her native land, the push-and-pull of her roles as daughter as well as mother.

The reading experience is as intense as it is enjoyable, thanks to the authorial honesty of Julia Barata, who lets us into her inner world where absolutely everything is kept in a chaotic state and can blow up at any moment. The key is in learning to enjoy it in the midst of the whirlwind.

Madriguera is the new release by Femimutancia. It won the “Todos los tiempos el tiempo” writing prize awarded in 2020 by the PROA foundation. As such, it focuses on the time frame of the pandemic, while continuing and deepening the evolution of themes and style present in previous works by the author, such as Alienígena or Banzai, which we reviewed last year.

In her new graphic novel, the poetic elements of Femimutancia’s work related to the figure of escape or transportation to fantastic planes in the face of an overwhelming reality are once again evident: in Alienígena, an alien abduction functioned as the protagonist’s manifest fantasy; in Banzai, it is on the plane of dreams and nightmares where the protagonist faces difficult conversations that will be processed in therapy sessions or in confrontations with ghosts from the past.

In Madriguera, the protagonist Rebecca crosses a mysterious threshold after being invited by a talking cat who seems to have escaped from the writing of Lewis Carroll. She wakes up on the other side, in a parallel universe where everything seems to be the same except for the existence of a virus, face masks, and police controls. What does not change in this alternate reality is the complicated relationship with her mother and the abyss that separates them.

In this parallel reality, as in the dreams in Banzai, these journeys don’t serve as empty escapism but as the terrain where Femimutancia’s characters struggle to put into words their feelings, to be able to process traumatic experiences that are never fully revealed in the stories.

These inner conflicts are carefully constructed throughout the novel, with an impressive authorial ability to construct naturally flowing panel sequences where we are shown the protagonist’s silent rituals, the delicate interactions between Rebecca and the characters, and glances that mean just as much as the few words that are spoken.

To this mumblecore spirit of intimate storytelling, Femimutancia adds a pinch of magical realism in order to highlight its relationship with the intrusive gaze of the other, making heads explode, or to explore the relationship between the head and the heart in the midst of ecstasy on the dance floor. These journeys are all ways to exorcise that which stands between the protagonist and their emotions, to be able to reconcile with the past and thus get a little closer to the emotional core of a complicated relationship between mother and child, scratching the surface to be able to put into words some of what hides behind the facade.

Madriguera is a testament to Femimutancia’s growth and evolution as an author, who evokes in their work a mark of maturity that we all go through: being able to have difficult and unpleasant conversations with oneself and with those people who cause pain and affection in our lives.