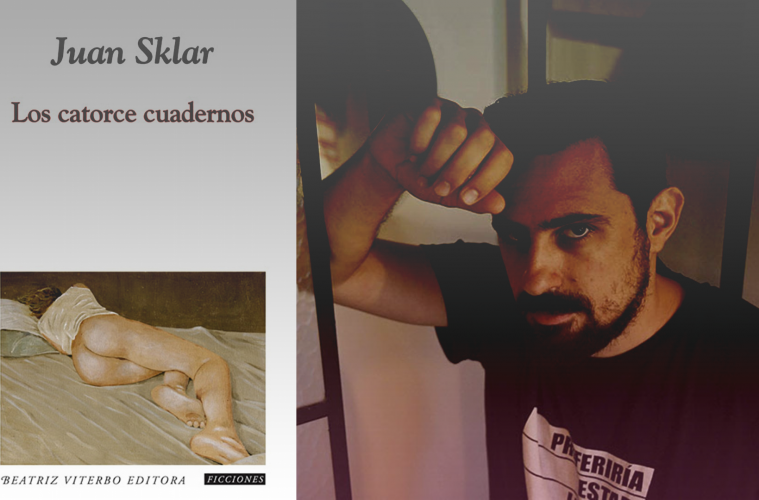 Lately I’ve been spending my nights with Juan Sklar. Even if only in my imagination. Juan accompanies me in my post-breakup evenings. I come home, pour myself a glass of wine. Sometimes I skip dinner. Sometimes all I can do is read, and only his writing. He is my partner in grief. We are both sad. We are both lonely.

I first came across his work a few months ago, listening to Concha podcast, the episode Conchuda. Jime, Dalia and Lau, performed a piece of dialogue from Sklar’s novel Los Catorce Cuadernos (Emecé, 2014), which goes like this:

“There was only one standing fan in the whole house. It was in Bebota’s room. Bruja’s reason for requesting the fan, which she had never done before, was that there were now four people sleeping in her room, and it was getting hot. Bebota refused, and her explanation was that she could not sleep without a fan. In any case, she said, you can bring the bed back to my room, and yours will cool down. The subtextuality and hypocrisy in the conversation was broken when Bruja said:
– Come on, don’t act so innocent. You made us move the bed a while back so you wouldn’t have to sleep with La Oscura and Barbeta. Don’t tell me that you want them back because the only thing you care about is to keep the fan – and she said it loudly enough to be heard by anyone within earshot. To Bruja’s outburst, Bebota responded with a twist in the conversation. The truth is – she told her – you are a conchuda. A huge conchuda.” (Sklar; p.80)

I played the episode back a few times, it made me laugh. I could visualize the scene of Bruja and Bebota fighting over the fan in my mind. I enjoyed wondering which side of the argument I’d fall on. I think I’m more like Bebota. I’m childish. I hardly think about others.

It struck me that someone would use such coarse, offensive language to portray women. Among many things, he referred to them as hypocrites. Some of that reached my ears. Juan puts me in that state. He makes me face the mirror and he says “Look at yourself, conchuda. Look at yourself.”

When I first started reading his work, I felt an immediate rejection to it. I thought he was out of line for writing like that, for stereotyping his female characters. I thought we had enough objectification of women out in real life. I thought Juan was just another machirulo posing as a writer. I cursed him out.

But I couldn’t stop reading his work.

At the end of the day, I too Beboteo. I want to have Bebota’s tits. I also like to feel that men want me as an object. I already treat myself like one: I paint myself, I put myself on, I take myself off, I look at myself. I groom myself. I compare myself to the other conchudas.

There is a kind of addictive principle in reading Sklar. You want more. You want to ask for more. You want it stronger. You don’t want it to stop. Juan turned me on. He said to me: “Come on, you know you like it too. You love to be treated like a little girl.” And it’s true.

I have done a lot of feminist reading in my life. I have changed many of my habits. I carefully craft this  “empowered woman” persona. But honestly, sometimes I wish a guy would grab me and say “I love your ass, baby girl. I’d be screaming for him to objectify me, please!

However, I almost always develop feelings, and I almost always get dumped. The power of my ass is not enough. Ergo, something is amiss. Juan also identifies this. In his post-fourth wave macho brutality, he has lapses of lucidity that I would have liked my ex to have. The protagonist of Los Catorce Cuadernos suffers a great deal. Not because of love, but because of his inability to love. Because of the impossibility of establishing bonds from a wounded, clumsy masculinity.

“Or do you fall in love with every girl you fuck?
I sank into my own ennui and my own sadness. Some friend came by with useless advice. It’s just a woman. Bebota is not just Bebota, because a woman is never just a woman.” (Sklar)

I agree, a woman is never just a woman. Can I say the same about men? I feel like what I like most about Sklar is his resemblance to the long list of men I’ve slept with. I even think that if we had crossed paths at a party, we could have easily hooked up and repeated the deja vu cycle of casual sex and bye-bye bebota. We both know how to handle those situations. Like I said at the beginning, we are both alone.