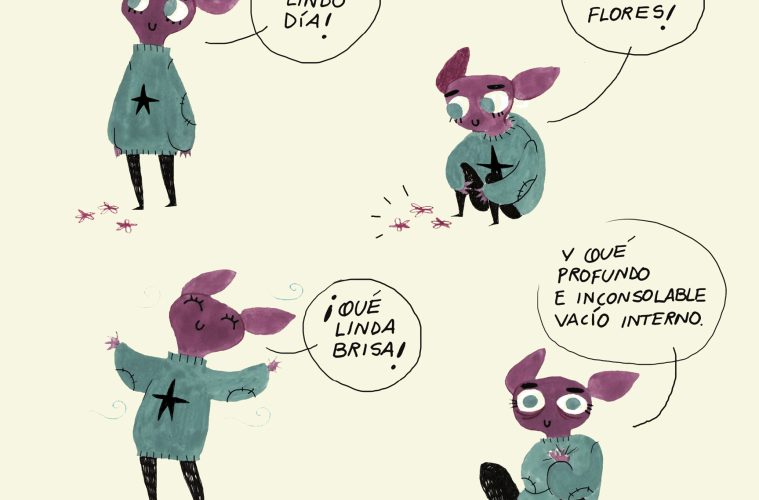 Welcome back to Ltd. Edition! On this occasion, we’ll talk about two of the first new releases in the 2022 indie comic scene: Athos Pastore’s new multimedia project “Transitar la Ciudad como Fantasmas,” which combines a classic comic approach with an audiovisual experience, and “Cuidado con el Coco,” GabiCoco’s first book compiling all of her comics and illustrations up to this day.

After releasing his experimental horror comic Galgo in late 2021, Athos Pastore published a new piece through Deriva Ediciones, only this time, he upped the ante with a comic that melds a 36-page comic, a music album, and a series of videos. In Transitar la Ciudad como Fantasmas (from now on T.L.C.C.F), Athos digs up and resignifies the concept of dérive coined by the Situationist International movement, understood as the potential to inhabit and resignify public spaces, in a post-pandemic context with futuristic overtones.

T.L.C.C.F. is also driven by the author’s desire to go adrift between multiple artistic disciplines, blurring the lines between visual and music expression to create an experience where a particular medium isn’t just a mirror or adaptation of the other, but rather complementary parts that build a mosaic. Visually, the work finds Athos delving deep into a technique that blends India ink, photography, digital edition, and pixel art, to generate a patchwork of images in a constant state of fluctuation.

Between the pages and songs that comprise this story, we follow the path of an erratic protagonist that wanders the streets of an urban labyrinth developing emotional bonds with virtual entities. In the illustrations, their face is constantly shrouded by veils and masks, walking the city streets protected by the armor of anonymity. In the songs, his voice channels raw emotion in spine-chilling primal screams, with electronic beats that convey a sense of speed and chaos. A mysterious figure, escaping the voices of his monstrous past self while trying to find a new identity.

The story is not limited to the urban setting, the protagonist also wanders through the avenues of cyberspace where, through multiple chat windows, they manage to develop an emotional connection with an unknown user. There lies the dramatic core of the piece: the complications of creating a meaningful bond with a virtual presence, of getting emotionally attached to an algorithm and using that to rethink the value of virtual vs physical reality, as well as the concept of identity vs anonymity.

Throughout the experience of reading/seeing/listening to T.L.C.C.F. we can observe how the story subtly adopts elements from futurism without becoming another chromed, utopian piece of sci-fi. Between the almost day-to-day images rises a new world reconfigured by the metaverse, where gender self-perceptions are naturally fluid and the mirage of a bright future vanished behind a cloud of cryptocurrencies and NFTs. At the same time, it is a testament to the fiercely independent, unbridled, and uninhibited work ethos of an author in constant exploration, not only in visual media but also outside of it.

Purchase T.L.C.C.F. here and listen to the songs here.

In 2015, Gabicoco emigrated from her native Chile and made Buenos Aires (and its visual arts scene) her new home base, creating comic strips and illustrations both in fanzines and in the digital media. Fresh out of the oven, Cuidado con el Coco, published by Espacio Paradojas, is a book that compiles her work during these last years.

Just as Paula Sosa Holt says in the book’s prologue, the title (…) “Shouldn’t be taken lightly: there is a sense of menace there.” Gabicoco’s graphic universe is filled to the brim with creatures and none of them look human. The advice they give us, the emotions they allude to are always delivered in a wry, incisive fashion. Their crazy ideas make us both laugh and worry about our weak spots and faults: they know us all too well, they know what hurts us the most and where to tickle us to make us burst into laughter.

Gabicoco’s bestiary is as adorable as it is peculiar: it has a gift to combine traits from different creatures in the animal kingdom and fairy tales to form a unique taxonomy. There is a keen eye for detail in the author’s work when it comes to character building, as well as a playful use of color, a deeply personal style that doesn’t pretend to be perfect, and a soft spot for creating space in the plot.

But, above all, what stands out in Gabicoco’s characters is their ability to go from cute to grotesque in just a few vignettes. We usually make the cultural assumption that talking animals, whether drawn or animated, are childish and benevolent. But at the core of the “funny animals” genre, there have been examples (usually rooted in counterculture) that showed the less kind and more adult side of these characters.

In Gabicoco’s comics, these characters serve as a vehicle to truly reflect about the monstrosity of the human condition and its emotional mechanisms: love as an act of egotistical self-gratification, the dead end alleyways of anxiety or existential doubt, and feeling disparaged by who should love us unconditionally are some of the dark topics Gabicoco touches on, always seasoned with a dash of humor. Just like someone who knows that there is little space between tears and laughter.

For all readers and fans of Gabicoco’s work throughout these years, the added value of being able to enjoy her compiled body of work speaks volumes to her coherence as an author: when reading her self-contained stories we’re introduced to different characters that belong to the same universe, a window to the visual world of the artist.