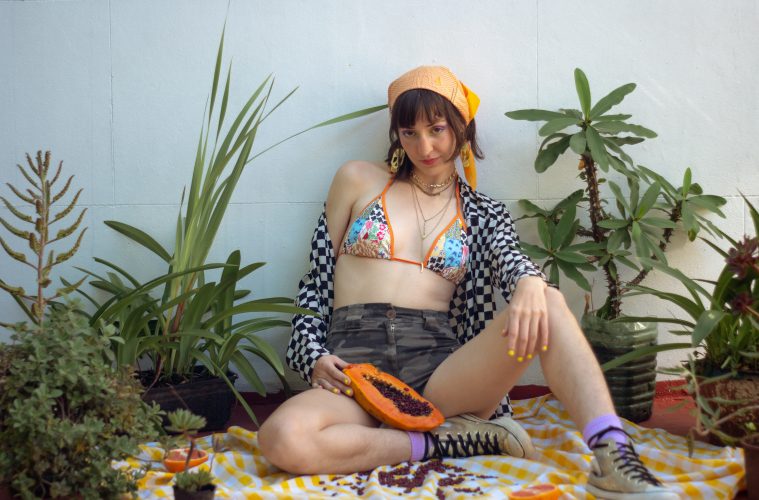 Spilling The Beans With Emily And

I can vividly remember meeting Emilyann at a very weird time of my life around the tail end of 2018. It was one of those things that happen during the kind of social osmosis I was allowing myself to experience at that point in time. Either way, I was exposed to many situations where there would be a guitar and she’d play some folk-pop tunes that really grabbed my ear. I was in a beautiful and perspective-broadening relationship with a friend of hers and we cultivated a sort of friendship with Emi throughout the years that happily coincided with different stages in her very own journey as an artist.

Now, with the recent release of her latest album “Spilling the Porotos” – which I had the privilege of pre-listening during the compositional process while I was still getting to know her, I realized I wanted to learn more about what she was going through during that time. Since she’ll be presenting her record in a live full-band format at La Tangente on the 16th of this month (click to buy tickets), it seemed like the perfect time to schedule a meeting with her and talk about the process of writing and releasing the record.

The first thing that Emi and I agreed upon is that “Spilling The Porotos” feels like a culmination of years and years of independent music releases – to date, Emilyann has written over 300 songs under her Emily And musical persona.

Most of the songs were written in 2018 and she told me that there’s a certain dissonance between the time songs are written and the time when they are released. It’s interesting that she said that since the record does feel like a time capsule of feelings all tightly packed in a 34-minute experience that portrays (among other things) Emily And going through questions about her own perception of love and relationships with other people and herself. We both laughed at the fact that it’s “an album you listen to when you’re crushing over someone”…but during the course of our conversation, I slowly realized that that “someone” can also be oneself.

The 11 songs all reflect different aspects of what Emi calls an alter ego that allows her to extricate her own private life from Emily And. Many internal struggles do seep through the cracks of many tracks in “Spilling The Porotos” and they reflect the internal turmoil of being a musician in the Argentinian scene. Tracks like “Ojalá” essentially work as a sort of mantra that reflects how Emily And takes over and asserts herself as a creative force in both her own mind but also the ever-changing underground scene.

Meanwhile, songs such as “El Gato Muerto (la re vivió)” have an anecdotal perspective that further contributes to the feeling that the album is a handful of memories translated into music. The track shows off Emily And’s punk roots with brazen and distorted sections that offer a nice change of pace after the initial selection of sugary pop songs.

Emi told me how she went through a process of macerating the songs in time and thus allowing them to mutate into different genres. Take the track “Ojalá” as an example of this.

Emilyann shared some thoughts on working with a producer that she really admires: Tomás Stagnaro : “I gave Tomi full liberty to employ his own taste and creativity in the production of the songs, because I had a lot of respect and trust in him as an artist. When he sent me the first drafts of ‘Spilling The Porotos’, the vibe of a lot of the songs was so different from what I would have envisioned, honestly, it felt so cringy to me! …but then I smoked a joint and listened to the tracks high and fell completely in love. The ability to loosen up and embrace your own ‘cringiness’, especially as a pop artist, is a crucial skill to develop. “

Actually, I’ve become really interested, both artistically and spiritually, in this totally uncomfortable process of doing the work to “let go of,” or rather, expand, my self-concept in order to embrace the resulting product of that concept being channeled through the mind and creativity of a separate individual [the producer]. This uncomfortableness, and the growth that goes along with it, is something that I seek to continue experiencing throughout my career.”

A big portion of our conversation veered towards this idea of the underground scene being a state of mind rather than an actual place you are in. She’s been playing for more than 5 years in Argentina alone and she’s certainly seen what the Argie scene looks like from an insider’s perspective.

On that note, she said the following: “Growing up, I was painfully aware of the fact that the US is, quite frankly, on some imperialist bullshit, and, essentially, a big dumb bully, geopolitically speaking. But like, aside from the foreign occupations and economic manipulations and government overthrows and all that jazz, what I wasn’t aware of prior to living in Argentina, is just how ubiquitous US pop culture and even alternative culture is here, and how it has been appropriated into Argentine culture. And while the reality is that that cultural influence is just another less-violent result of that same imperialist dynamic, and mass marketing, a lot of people here have a truly deep admiration for US culture, or even like, put it on a weird sort of pedestal. I still can’t get over the fact that listening to Creedence Clearwater Revival is literally an Argentine Christmas tradition. “

“I don’t feel Yanki at all”, she said. I am inclined to agree with her statement, as she has internalized our culture in a way that’s both respectful and genuine. She doubled down on the previous statement by saying “I hate being asked the same questions every time someone notices I’m originally from the States. I want to talk about my music! And I feel like when you listen to my music, you realize that the content of the songs is unequivocally tied to the bonaerense experience. Like, honestly a lot of what I put in my songs would be totally lost on someone who hasn’t lived in Argentina.” I noted an interesting parallel with Spinetta’s Bajo Belgrano because both records share that barrio sort of vibe, even though they are completely different genres musically speaking.

The official presentation of “Spilling The Porotos” is in and of itself a celebration of love, friendship, and comradery. “My bandmates are also my friends and I like how we truly understand each other and they know how to interpret my ideas so clearly”, she said with a sweet grin on her face. Some posts on her official Instagram showcase all this love in short and tender blurbs explaining how she met her bandmates. The girls from Pulpa Riot, an all-female production team also chipped in and collaborated in the rollout of her videos and photographic material for the presentation.

When asked about what the show will be like she told me it will be filled with surprises all throughout and that she was happily surprised with how well all the members jelled together during rehearsals. One can infer that this is a natural consequence of collaborating with close friends and it’s clear that they are all very much committed to the task of breathing new life into the already young record.

One thing is certain, Emily And’s presentation is shaping up to be a game-changer both in her own artistic journey and the scene at large. There’s almost a childlike wonder in the way she spoke to me about it and if the songs sound as crisp as they do in the record, then those expectations will surely be met. You can catch her spilling the beans as well as her heart and soul at La Tangente this Saturday. We couldn’t be more excited or grateful that such a display of unadulterated honesty like “Spilling The Porotos” will soon be portrayed live.