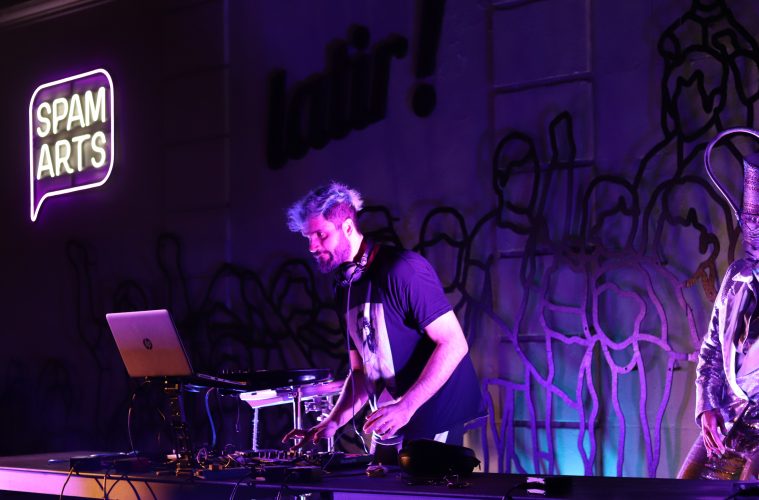 Over the course of the last few decades, the increasing presence of the digital world over our daily life has gotten past the point of simple novelty. Things that seemed fanciful and futuristic just a few years ago are now part and parcel of our daily routines, from moviewatching to payment methods to online classes. It makes sense, then, that this increased reliance on virtuality would also influence our artistic output.

Enter Spam Arts, a platform for the distribution, discussion, and formation of digital artwork, encompassing various artforms such as filmmaking, live coding, music, VR, and more. First starting as a film festival of sorts, exclusively featuring short films made entirely on mobile phones, it quickly grew into a many-headed project that seeks to explore all the possibilities that virtuality offers to our cultural output and consumption.

Far from simply showing off the works of these artists, Spam Arts is interested in creating conversations about the very nature of the work, hosting conversations and workshops that dig deep into the creation, implications, and distribution of digital work, as well as the space they occupy within our sociopolitical realities.

For instance, on April 29th, at the Centro Cultural Recoleta, a new Spam Arts event titled Feminismo Ciborg & Brecha Tecnológica will include code-art workshops, multi-media performances, and conversations about gender in the world of digital art.

We spoke with Spam Arts director Florencia Giacumbo about the past and future of the Spam Arts platform, the questions it seeks to ask, and the movement that started it all.

LLL: What is Spam Arts?

FLOR: Spam Arts is a digital art platform. In the previous edition we focused on art made for and by mobile devices, and now it encompasses many different languages of digital art.

LLL: Where did the idea come from?

FLOR: It first came from exploring the mobile cinema movement. Several years ago I started hosting workshops in different institutions (high schools, neighborhood spaces, even some universities) about the incorporation of the cell phone and audiovisual language in the classroom. Then I started to get into the world of audiovisual production with cell phones and I saw that in different countries there were film festivals featuring art made entirely with them. I noticed that this did not exist in Argentina, and with that idea I approached a production company which was very interested in the idea, but they took it even further by not thinking only of the audiovisual language but also in the different artistic expressions.

Last year we explored coding from devices, collage, short films, and the project began to transform. That’s when we saw the limitation of the device, of staying with the technological artifact. How much are we going to keep hovering around the artifact and not around a movement that is super-rich in languages that exist on the Internet? We saw the strength of the whole movement, of the different digital languages and the different expressions of the process, and we moved a little bit away from the artifact. We started to want to get more into these different expressions, which range from the metaverse to augmented reality, mixed reality, coding, net art, imagine learning, artificial intelligence, and so on. The cultural production from those angles, trying to give it a space from the visibility, from the problematization, reflection and also as a training space.

So when we say that Spam Arts is a platform, instead of seeing it as merely a festival, it is because the intentions or aspirations of the festival are based around three vertexes, three axes. It is not only the dissemination of these works, of these languages and expressions, but also the training in these disciplines. Some are on the rise, but others are still occupying the most hegemonic places within the culture. Our goals are training, dissemination, and finally also reflection. That is why there is always a space where there are talks, master classes, discussions, and more.

LLL: Back when you were focused on art made by mobile devices, before expanding your focus, what surprised you the most?

FLOR: Maybe because of my personal background, I was fascinated by its use in filmmaking. For example, last year we featured a Nigerian collective called The Critics, a group of kids who make short science fiction films with cell phones. Later they equipped themselves with a computer to do the effects, but at the beginning they did everything entirely from cell phones, and it was amazing in its scope and ambition..

LLL: What is the biggest difference in how Spam Arts exists this year compared to its beginnings?

FLOR: Aside from the expansion of what we cover, this year we are doing face-to-face events. Although there are also going to be virtual instances and we believe that is part of the DNA of the project as well. For example, we have been doing events where artists use code to remix images that are circulating on the Internet. This workshop is recorded and then available as a small workshop on demand on our website, a piece that is then posted on the platform and people can watch it from anywhere in the world.

LLL: Very good, because one of the key aspects of virtuality is the blurring of physical borders, of distances.

FLOR: Exactly. And this year instead of thinking of an event that happens in a week or over a couple of days, we are thinking of a more long-term project, in the sense that we will be divided into different events, in different spaces of the cultural scene of Buenos Aires. For example, tomorrow we are going to be in a space for young people in the Capital, we are going to do a cycle in Tecnópolis, and in March we will be in the Recoleta Cultural Center. We are talking with different spaces of the cultural scene in Buenos Aires, where we will be hosting different events, each with a thematic axis. From the exhibition of works to the talks to be given, as well as the type of workshops.

FLOR: The point is to think about digital corporealities and how this obsolete division in what is material and what is virtual, that dichotomy between what is reality or what is the incidence of bodies in one space or the other. The next place we will be landing we will be working on is Donna Haraway’s cyborg manifesto, talking a bit about the technological gap in gender, so it’s like each landing in each space brings with it a programming that is touching on a problematic in itself, a theme.

For me the interesting thing is that it’s all related to the concept of Spam, the idea that it bursts onto scenes, onto spaces where digital art is not so prevalent. If you disembark in different places it’s as if you were doing a more powerful communicational action.

LLL: How do you envision the future of Spam Arts?

FLOR: I would like it to transform, I imagine it as precisely this idea of the platform, to be something that is continuously generating information content, training, appealing to spaces that enable academic profiles that can bring a deep reflection, debate tables, workshops, trainings, exhibitions. It should be a platform that is continuously generating activities and contents in a hybrid way, both in face-to-face and virtual spaces.