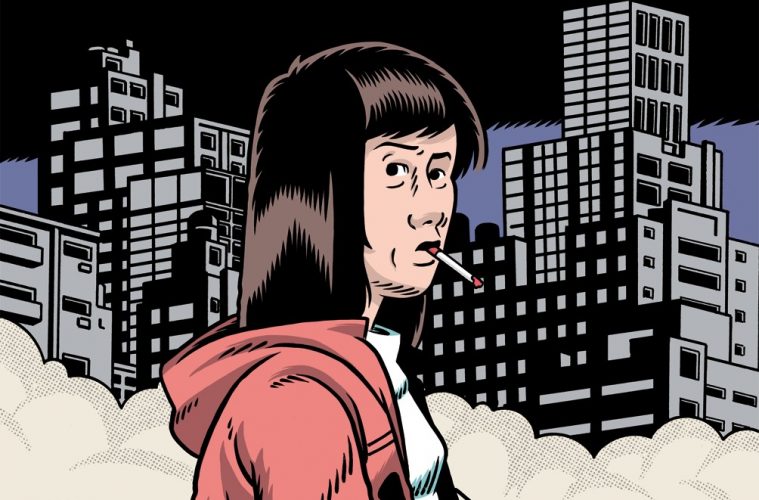 Welcome back to Ltd Edition, the indie comic appreciation corner of La La Lista! After taking a few months off, I’m going to take the opportunity to officially close out 2021 by reviewing the last two titles I read from last year. They also happen to be among the ones I enjoyed the most. So we begin 2022 by writing about two fantastic pieces: Pablo Vigo’s magazine-format project Dusko, and Xina Ocho’s comic-book debut Inframundo.

As is the case for any admirer of Pablo Vigo’s work, every year where he has published new material counts in my book as an important milestone in the calendar. Luckily, 4 years after the release of his first book Lo Salvaje, he is once again working with the Maten al Mensajero publishing house to release Dusko, a magazine that works as a short anthology of the author. Misery and humor coexist in the intimate stories of his characters.

This new release is a more concentrated format than his previous book, a 32-page magazine. This kind of illustrated EP is comprised of the stories “Combustión” (previously published in the Guiso Policial anthology), “La taza”, “Dos pinturas”, “Aloe Vera” and “Aparición en el Departamento 7A”. They reaffirm the expressive capabilities of his style and the deft deployment of his weapons in storytelling. The very first discovery happens before diving into its pages: right there on the inside cover and back cover of the magazine we find Leonard Cohen’s beautiful unpublished poem “Dusko’s”:

They are still singing down at Dusko’s,
sitting under the ancient pine tree,
in the deep night of fixed and falling stars.

If you go to your window you can hear them.
It is the end of someone’s wedding,
or perhaps a boy is leaving on a boat in the morning.

There is a place for you at the table,
wine for you, and apples from the mainland,
a space in the songs for your voice.

Throw something on,
and whoever it is you must tell
that you are leaving,
tell them, or take them, but hurry:

they have sent for you –
the call has come –
they will not wait forever.
They are not even waiting now.

Some of the poem’s spirit colors the reading of the stories contained in this collection. That mixture of nostalgia and anxiety, the fantasizing about what is happening to someone we see or hear from afar, are tools that Vigo employs to give voice to characters that feel painfully real.

His thick linework and illustration style, his attention to detail in urban landscapes and his handling of chiaroscuro in his comics is something easy to admire (and envy), but where his growth as an author lies is in his ability to bring his characters to life. Whether telling stories in 10, 5 or even 2 pages, Vigo shows care in the assembly of the pages, playing with the visual information and the script to generate a sequential narrative that manages to distill tons of humanity in his characters.

In Dusko, the machinations and internal monologues of his characters far outweigh the dialogue, what they say to each other. This technique, perfectly suited for the medium of comics, became a kind of authorial mark of Pablo Vigo’s; a vehicle through which we can access the neuroses and the most private thoughts of his protagonists.

Vigo manages to generate a special connection between these characters and whoever peeks through his vignettes, through what they say (to each other) and what they hide (from each other). In a tone that oscillates between slice of life and mumblecore, Dusko achieves an entry point into the lives of its protagonists in media res through a memory, a therapy session, or a particular fixation. We don’t know their names or what they do, but we are witnesses to their hurt and their obsessions, even if they are not able to express it. Often not even to themselves.

Undoubtedly, Xina Ocho was one of the key figures rethinking the national comic scene last year. Her project Inframundo was a work in progress that began as an online comic book being released chapter-by-chapter, beginning at the end of 2020 and developing throughout 2021. It was finally compiled in book format in December of the same year by the publishing house Hotel de las Ideas.

The book follows the life of Carolina, a girl in her twenties who finds herself going through the chaotic period between the end of adolescence and the problems of “adult life”: balancing an underpaying day job where she must deal with a shitty, unappreciative boss, with the consequences of hedonistic nights out dancing with freinds and the distressing scenes that arise from casual sexual encounters. And on top of it all, there is an opportunity to move into a space of one’s own to escape the pressures and tension that tend to arise during family lunches.

In this breeding ground of crisis and anguish, a dark apparition begins to whisper to her, criticizing her during bus rides or while she brushes her teeth. This sort of demon bursts into Carolina’s life to act as a second voice to her intrusive thoughts, marking her weaknesses and feeding her worries about how others perceive her. Throughout the eight episodes that make up the book (with titles like “Sos un asco”, “Vaga” or “Inútil”) Carolina suffers her dramas fueled by an unwanted companion giving voice to her darkest thoughts and accelerating her descent into the underworld.

This book, half autobiographical and half fantasy fiction, allows Xina Ocho to transmute memories created during her twenties and thirties. It is an illustrated story that, thanks to the use of color and the author’s linework, manages to move away from mere experience-logging to give place to the horror, the ugliness, and the humor of navigating an emotional storm.

In this mixture of fictionalized experiences and fantasy catharsis, we find the story’s main strength, made possible by the author’s artistic dexterity: in the pages of Inframundo, there is no filter on photos; the grime and dirt of surroundings aren’t covered up. The representations of bodies and spaces mutate according to Carolina’s emotional state while everything happens to her, all the time.

It is impossible not to want to accompany her to that underworld, to that self-destructive trance where the words that her dark companion whispers in her ear begin to sound more and more like those we’ve told ourselves during particularly dark periods. The thrill is in seeing how she manages to navigate it, with no guarantee of what we will find at the end of the road.

Reading Inframundo was, in a way, a transformative experience (as tends to be the case with any great piece of art). It comes to shake up the rulebook on how an author can create their own story through the graphic medium, and it does so by showing off the narrative potential of Xina Ocho in her first full-length work. It is necessary to remind you that, should you be so inclined, you can read the complete comic for free on her website! Consider it a little overdue Christmas present.

Until the next Ltd Edition, where we’ll be exploring the first titles of the year!