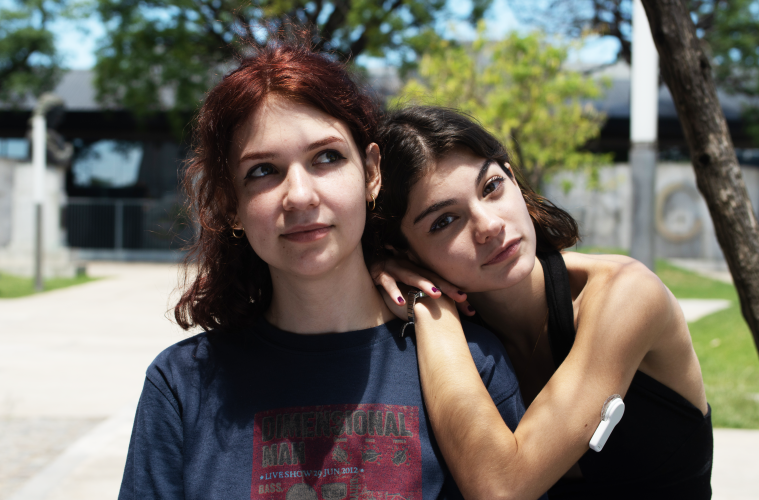 Ever since YouTube clawed its way into our collective consciousness, the “YouTube bedroom cover” has become its own genre of music exploration. Talented young people putting their skills on display by performing rudimentary — but sometimes extremely effective — covers of other people’s songs. Often, these homemade arrangements reveal charms hidden in the original under layers of studio production.

It’s long past the point of novelty; famously, musicians such as Alessia Cara and Justin Bieber got their start after posting their material on YouTube. What’s a little more unusual is the odd confluence of events that led to Inés Adam and Martina Nintzel playing sold-out club shows in New York City within months of knowing each other, after videos of the pair playing cover versions of New York early-2000s indie-revival powerhouses The Strokes became widely shared on social media.

Featuring an undeniable spark and youthful enthusiasm, the duo’s stripped-down versions of millennial anthems have an irresistible charm that makes them compelling and utterly shareable. And though they exhibit the musical and personal chemistry of a pair of friends who have known each other since childhood, they first met in January of 2021 after a mutual follower suggested they play a song together. The YouTube platform recommendation feature favored their homespun cover, and soon they officially adopted the moniker Pacifica.

Soon adding songs by other artists to their repertoire, and now writing their own originals, Pacifica is a promising duo finding their voice and seeking to maximize the algorithmic kickstart they’ve been provided to carve out their own artistic identity. We spoke to the duo last month while they were in New York City playing a string of sold-out shows.

How is New York City treating you? How were the shows?

Inés: So good. We played two shows. It was supposed to be one.

Martina: The venue offered us another one and we said sure, let’s do it.

Inés: It was great. We thought nobody would show up.

Martina: To us, it was like, “we’re an Argentine band. Who even knows us here?” But we filled up the venue.

Inés: And people were so nice. We autographed a bass guitar. That was fun.

Awesome. Was that the first autograph you gave in your music career?

Martina: Not the first autograph, but the first one on an instrument.

Martina: It’s partly from Inu’s YouTube channel, partly from the Pacifica channel we recently launched, partly from Instagram. I also heard a couple people mention they know us from an old Strokes fan account I had. A bit of everything.

You have a sizable following for such a young band.

Martina: We are a very young band!

Martina: We only officially became a band two months ago.

Inés: We’ve only known each other for a year. So yeah, it’s a bit shocking.

Inés: People had the impression that we were best friends.

Inés: We didn’t really know each other.

Martina: Truthfully it was like, “we’re in the middle of a pandemic and we literally just met.”

Let’s turn the clock back a bit. Inés, you’ve been posting covers on your YouTube channel for a while. How’d that start?

Inés: It was sort of like, “I like to sing and I like to make music, but I’m not sure how to do it. So instead of trying it out in front of a crowd I’m gonna try it in front of a little camera.” And I don’t know why, but I kept at it, even though those videos weren’t doing particularly well at the start. It was something I enjoyed doing in my free time, and when it started to gain traction I thought “I should try to be more consistent, or try to improve the audio quality a bit,” and it grew from there.

When did you realize people were actually paying attention?

Inés: I think it was when I started playing with other people. My cover of “Cornerstone” did very well when I posted it. And then “12:51” blew up.

“12:51” marks the start of the Pacifica era. How did that happen, if you didn’t know each other from before?

Martina: I had this account where I uploaded Strokes-related content. I’ve been playing the bass for two years, so I started uploading short videos of myself playing Strokes songs. That’s why, at first, we only played Strokes covers; it was the one thing we knew we had in common. One day on Instagram, a mutual follower said “you should meet up.” That’s when we discovered we live about 30 blocks away from each other. We got together and we played “12:51.” That’s the day we met.

Inés: When we got together we thought “we could play this song, or this one, or this one…” We hadn’t really decided.

Martina: But I think we had both thought of it as a possibility.

Inés: I dunno, I sort of didn’t really know it that well. And I also didn’t know how Martina played, because her videos were very short.

Martina: They were ten-second videos where you couldn’t see my face.

Inés: And I thought “what if this girl isn’t a good bass player?” Luckily, that didn’t turn out to be the case. But there was definitely a moment where it was like “well, let’s see.”

Martina, I’ve noticed that you replicate some guitar lines on the bass. You do it on “12:51,” for example. It’s a clever way to fill up the harmonic space in the songs, which is hard to do with just one guitar and one bass.

Martina: Yeah, there’s five people in the band and only two of us. So I was listening to “12:51” and realized that if I stuck to playing the original bassline, he only plays root notes and that would be boring. I thought I’d add in some of the guitar parts and it turned out cool.

Martina: The day it came out it got like 10,000 views, then it continued growing.

Inés: I was like, “oh, we should’ve recorded it better.” But that always happens. You never know what videos are going to be a hit.

Martina: You might have a video that sounds great and nobody sees it. But I think that’s part of the charm, that it doesn’t sound great.

I found you through your cover of “Barely Legal,” which I think is your biggest video so far.

Inés: A lot of people in the show found us through that video. We published it right before we traveled here, which was great timing because that’s how many people found us. The YouTube algorithm tends to push out a lot of Strokes material.

Was it always your plan to form a band?

Martina: No, we actually met to record that video, then once more, and then the second wave hit. Since I’m diabetic, I had to isolate, and so we didn’t see each other for 6 months.

Inés: We did some remote stuff, but it wasn’t the same.

Martina: Then I traveled to the US and got stuck here [because of Covid-related travel restrictions], and more time passed. When I finally made it back I said “let’s get together.” And Pacifica was born shortly afterwards.

Inés: I think we got together to record something, and then we went to a concert together, and we thought “okay, let’s start playing. We need a name.”

Martina: That same night we got contacted by an Arctic Monkeys tribute band to play a show together two weeks later.

Did you play Strokes covers?

Martina: We were there as a Strokes cover band.

Inés: But we’ve started incorporating other material. We started being referred to as “the Strokes girls.”

Martina: We weren’t really into it. We love tribute bands, but we don’t want to be a tribute band.

Inés: Right, we want to do our own thing. And now in our shows we play our own songs as well.

Martina: We still play Strokes songs because that’s what people mostly know us from, and that’s why they came to see us, but we don’t want to limit ourselves to that. We’re uploading different types of songs.

What are your plans in the long run? Are you going to be recording these original songs?

Martina: We’re in conversation with a few different labels to figure out what the next step is..

Do you write the new songs together? Would that change if you added new members?

Inés: Up until we incorporate a drummer or second guitarist, the band is just us.

Martina: We write together, we figure it out together.

Inés: We’d be the creative head of the group.

Martina: Mainly what we need now is a drummer.

Inés: We’ve been doing fine without one so far, but you really miss it.

Martina: People tell us we sound good for being just two members, but we want to sound good, full stop.

Inés: You really miss it. When people clap along it’s like oof, yeah, you need that rhythmic part.

Martina: That’s if they clap along in time.

What differences did you notice between the audiences in Buenos Aires and New York?

Martina: It depends, but in general Buenos Aires audiences are a lot noisier. They sing along, they clap along. Here in New York they’re a little quieter but then they come up and say hi, ask for pictures, etcetera.

Are you going to phase Strokes songs out gradually, or will it be more of a sudden thing?

Martina: I think we’re already in that process. Nowadays we play some originals and people like them. But since we don’t have that many originals, we have to throw in covers. I think the more we write new material, the less covers we’ll play. But it’s always fun to play covers.

Inés: I think we’ll always throw in a surprise cover, as a little nod to the people who know us from before.

Are you writing your new songs in English or in Spanish?

Martina: In English. The music we listen to tends to be in English, so when we started writing we tended to default to that.

Martina: Playing in Argentina, people do tend to ask “why don’t you sing in Spanish?”

I think it’s more common than you think. I know people who prefer to write in their second language. It provides a certain degree of separation between themselves and the lyrics.

Inés: Yeah, it helps you hide away.

Any plans for shows in Buenos Aires?

Martina: We’re opening for Joystick in April, at La Tangente.

Inés: When we get back to Buenos Aires our main priority is to find a drummer. We don’t want to keep playing shows without a drummer. And we want to start recording our songs. Because we could either keep playing shows in this format, or we could start creating more content for shows that might be more dynamic.

A couple quick ones before we wrap up. What’s the first album you remember loving with all your heart?

What have you been listening to lately?

Inés: It’s a band from New York that we learned about like a week ago from a mutual friend. We love them.

Martina: Their aesthetic, their sound, we just love it..