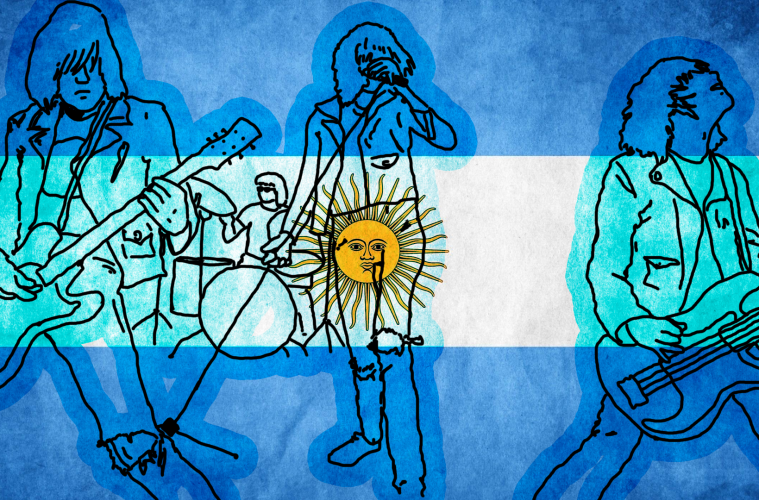 The Ramones and Argentina: A Decades-Long Romance

Argentina’s musical DNA includes the brokenhearted melancholy of tango, the fist-pumping rush of rock nacional, the frenetic swing of cuarteto, and the rhythms of various other autochthonous styles such as chacarera and chamamé. But amid all of these sounds, there is also something… different. Something decidedly foreign. I’m talking about a precise combination of buzzsaw guitars, nursery-rhyme melodies and wryly humorous lyrics; elements which, put together in a specific configuration, make up the sound of seminal punk rock stalwarts the Ramones.

It would be hard to overstate the importance of the Forest Hills quartet in Argentine music culture. While much of the world has forgotten about that brief period in the mid-to-late seventies when the cultural landscape was set ablaze and rock music was revitalized by a handful of explosive bands, the spirit of the punk revolution seems to be alive and well in Argentina. Not only are the Ramones still present in as pop culture touchstones – their music appearing in ads, their faces still emblazoning magazine covers, and their logo still ubiquitous on clothing and merchandise – but they also continue to inspire new generations of Argentine bands to put their own spin on the “Ramonero” sound.

The fact that a New York band from the late 1970s continues to have such a strong impact on Argentine culture is curious, especially considering the fact that the band never achieved much in the way of commercial success in its home country. Toiling away for literal decades in the underground scene, the Ramones acted as pied pipers of punk – they may not have dominated the airwaves, but they played a lot of shows, and their approach to music-making inspired countless acts that would eventually go on to overshadow them commercially.

And while they would eventually earn their rightful spot in the pantheon of seminal rock bands (even getting inducted in the Rock and Roll Hall of Fame six years after disbanding), there’s a certain Beatlemania type of mainstream success that eluded them in the United States. Not so much in Argentina: their visits here were marked by incidents of hordes of fans showing up at their hotel, following them around town, and generally displaying the sort of frenzied fanaticism that you’d expect from the most fervent of fandoms.

But why Argentina? What is it about Argentines that created such a strong bond with a band that was all but ignored in their home country for 22 straight years? Why does their music resonate so strongly with Argentine fans? Gerardo Barberán Aquino, a TV writer and music journalist, has spent a considerable amount of time trying to find the answer to that precise question. He is the author of the book Ramones en Argentina, published by Gourmet Musical, which tracks the history of the seminal punk band in Argentine soil, featuring interviews with journalists, musicians, fans, and band members in an attempt to make sense of this peculiar relationship.

“It’s something that is hard to explain,” he told us in an interview. “I think it may have to do with the band’s lyrical content. When you have lyrics that deal with this band’s themes of hardship and turmoil, it’s easier to connect with Argentine fans, especially if you consider what Argentina has gone through, historically.” The fact that the band’s lyrics often deal with such topics through a thick layer of humor might be part of the equation, too, and speak to the Argentine sensibility.

The band visited Argentina seven times between 1987 and 1996, playing a total of 27 shows in the country. Shortly before their first trip to Argentina, Joey Ramone admitted to the press that he had no idea what to expect from the band’s fans south of the Mexico border. Fast forward a few years, and it would be impossible for the band to leave their hotel without being swarmed by a mob of fans. There is footage on YouTube – shot by Marky Ramone, the band’s second drummer and resident historian – that is legitimately frightening to watch, as the band’s van is seized by the Argentine fans and nearly rocked over.

Not only that, but there were incidents such as Coca Cola’s famous blunder: In 1996, the Argentine branch of the soda company announced they would give away free tickets to the band’s concert in exchange for ten bottle caps. The fans, many of them working class, seized the opportunity to see their favorite band for free. Massively underestimating the band’s appeal, Coca Cola didn’t have nearly enough tickets available, resulting in riots and looting.

Barberán Aquino pointed out a passage in his book that is taken from a Pagina ½ interview with a Ramones megafan nicknamed El Muerto, which he considers a good indicator of why they inspired such strong devotion. Interviewed by journalist Pablo Reyero, El Muerto says: “Eighteen years of history without falling off the wagon. Now that’s what I call strength. To us, the Ramones represent that street version of rock music that opens your mind and shows you that life can be more than simply going to jail or drinking with friends at a bar.”

“This, to me, speaks to why the Ramones inspired such passionate fans,” Barberán Aquino told us. “People saw themselves reflected on the band. Without them, without that music, the lives of those fans wouldn’t consist of much more than getting arrested over and over again, or drinking or doing drugs with their friends. They wouldn’t be able to overcome that because they just didn’t have the means to, they were set up to fail. And that’s who the Ramones were, too, before starting the band.”

In Jim Fields and Michael Gramaglia’s 2003 documentary End of the Century, the band’s artistic director Arturo Vega talks about how Latin American fans saw an escape in the Ramones. “Bands like the Ramones helped these kids express a little catharsis about their situation, how bad their situations are. It’s like London in ’76. The kids see no future. And again, it’s the rawness of the message that they respond to.”

This makes sense. With a history of political turmoil and an economy that is consistently on the verge (and sometimes in the midst of) deep crisis, it makes sense for Argentine rock fans to seek some release in their music. Coupled with the band’s musical approach – fast tempos, aggressive downstrummed guitars, irresistible pop melodies, and lyrics that deal with unconventional topics through sideways humor, the band’s influence on Argentine rock music is still keenly felt through younger bands such as Attaque 77, Flema, Massacre, and Pelea de Gallos.

Like The Simpsons – another piece of foreign media that has become a part of Argentine culture – the Ramones make light of weighty topics, mix humor and heart, and have been assimilated into the Argentine identity in myriad ways. And as fast as culture moves – almost as fast as Tommy Ramone’s locked-in 4/4 drumbeat – we don’t see their status as adoptive sons of Argentina changing any time soon.

Gerardo Barberán Aquino’s book Ramones en Argentina is available online and in bookstores throughout the country.