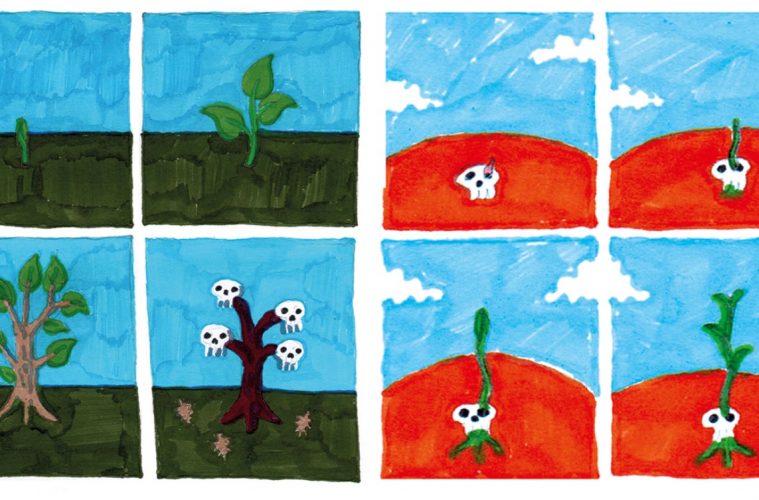 Welcome back to La La Lista’s monthly Argentine independent comics appreciation column! While we took a break from the reviews, various new books and fanzines started to sprout up everywhere and thankfully new material is still being released for us to analyze and discuss. This time I want to talk about two titles that came out in recent months and that, in their own particular (and humorous) way, reflect on life, death and the passing of time: Terrestre by Juan Vegetal and Apocalipsis Mientras Tanto… by Sine.

Terrestre (publishd by Editorial Paradojas, 2021) is a collection of illustrations and comic strips made by Juan Vegetal over the last two years, with a host of characters who live in a world similar to ours but more of an alternate reality. A meeting point between various interplanetary lifeforms in a not-too-distant future.

Terrestre features goblins that live in air conditioners, teenagers who eat pizza with space beings and share ice cream with ninjas, animals that are abducted by flying saucers, and a girl who befriends a mascot that could well be a reincarnation of our dear Office assistant Clippy. But above all, what abounds are vivid colors, featuring the unique texture of crayons on paper.

Throughout the book, this colorful world and the amusing creatures that inhabit it coexist with the author’s reflections about the passage of time and living in a loop, or the nostalgia of “staring out the window”. Juan Vegetal’s visual imagery is capable of creating universes as immense as they are strange, like antibodies against stillness and confinement (a condition that we all suffered through in 2020 and much of 2021).

Within this context of redefining the importance of (and the inherent alienation in) our virtual connections to each other, Juan Vegetal’s illustrated universes have long been prophetic: Already in his previous work Cibercity (Wai Comics, 2017) he was creating visual schemes to try to explore our relationship with the internet (and with each other). In Terrestre, Juan Vegetal’s gaze sharpens, sub-atomically splitting the pages into hundreds of vignettes and having fun while he does it.

Waiting for the End of the World

Since the beginning of the pandemic, Sine embarked on a project that sounds hard to pull off on paper: keep a blog of visual humor about COVID and life in society under the fear and mandates associated with the pandemic. These strips began to be shared weekly on the Barro Editora site and ended up forming Apocalipsis Mientras Tanto…, a book that compiles these strips together with other unpublished ones. It serves as that works as a humorous sublimation of the annoyances caused by the confinement and the human condition.

All the tools that she deployed on her previous release Amarga to express her childhood experiences and the sad reality of growing up under the oppressive thumb of gender norms in Argentina are on full display here, depicting a quarantine that was supposed to last “for a few weeks” and ended up marking 2020 and much of 2021 with hopelessness and claustrophobia. This book attempts to find a bit of humor in the bitterness without neglecting its critical gaze and the author’s fluid linework.

Throughout the book, through the exercise of portraying with humor the passing of the days in an ever-present state of alert, we can see that Sine never takes the easy route when it comes to depicting the trappings of 2020. Yes, there is sourdough, there are video calls, and there are jokes about wearing facemasks, but there is also an effort to look for the most human and personal cracks in the middle of an experience that completely upended all our lives, and to generate a genuine connection between the reader and the scenes depicted within.

It is also very clear that for Sine the personal is political, and her work points out that the pandemic did not stop street harassment or the advance of the climate crisis. These characters feature private joys and misery, coexisting with public concerns. This portrait of the strange ways of interacting with each other in times of compulsory social distancing (in forced interactions through video calls, in dealing with people who are devoted to wearing a mask incorrectly) bring to light the complexities of dealing with the other.

Whether it is hopping on a ship departing to colorful and extraordinary worlds where time is measured in many different ways, or remembering the complexities of the last two years with a weary sense of humor, independent comics are helping us combat the frenzy of the last weeks of the year. For now, we’ll say goodbye until the next Ltd Edition, the last one of 2021!