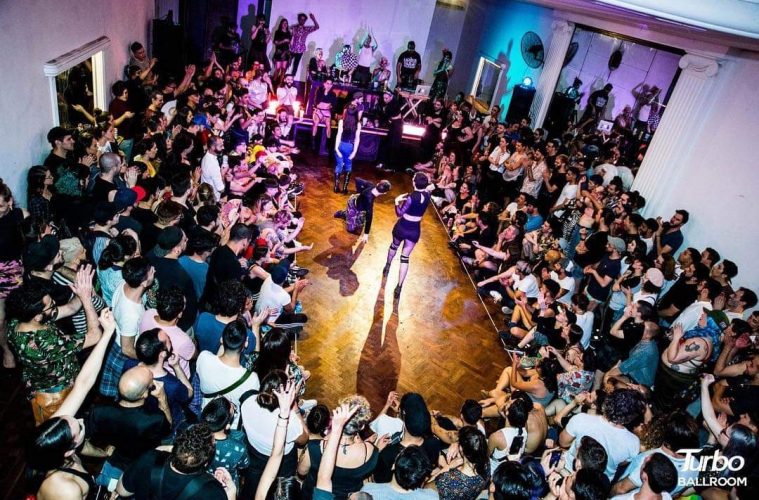 Every so often, the deep underground of a Buenos Aires subculture rips open and out pops liberation, fashion, creativity, and impeccably rehearsed poses. For years the folks at Fiestas Turbo have been creating a space where gender bends, where body types of all kinds are more than accepted, and where the full spectrum of sexuality is not only visible but celebrated. The parties they throw are always inclusive, super queer spaces where you can explore both your masculinity, your femininity, or whatever the fuck it is that makes you, you. Perhaps this isn’t the type of event for “normies” if “normies” aren’t people that believe in freedom of expression, self-exploration, human connection, or challenging one’s self to put together a bad-bitch outfit in this insane economy.

But if those are things you stand by, do yourself a favor this Saturday November 6th right after the Pride March and get down to Beatflow (Av. Cordoba 5509) to witness the magic that will be the latest edition of Fiesta Turbo’s efforts, Turbo Post-Ballroom. Notably, this is the first full-on Turbo party since lockdown. There will be voguers facing off, freestyle dance battles, and a whole lot of celebration of anyone who has ever felt left out of the mainstream. We sat down with one of the main players behind this event, Rodrigo Rotpando, to learn more about ballroom culture and why these spaces are so damn worth supporting.

What is Fiesta Turbo all about and how did it get started?

Turbo is a party that I began organizing three years ago, but I’ve been putting on parties in the queer community for 15 years. Everything started with my crazy urge to create a space that encompassed free queer expression with vogue, because it was always something I thought was interesting and a huge form of release, both physically and in the way that it breaks away from the established ideas of masculinity. So, I always thought voguing was fascinating and kept meeting people who were interested in helping. It started as a pilot project, with a small group of people and then began to grow. Over time, it has transformed into what it is now; we are basically a community of a ton of people interested in vogue, with other people that are interested in drag. Turbo is a production company that throws parties and ballrooms.

Ballroom culture is an entire queer subculture that’s been around since the 1930’s, but sort of made its mark in the 80’s. Ballroom refers basically to the location of where all these sorts of runway events/vogue battles occur. How would you describe voguing to a newbie who knows nothing about it?

Voguing is an urban dance that originally submerged out of the subculture of New York City but has since gone global. It’s a dance form, but it’s more than that. It’s a way of releasing an intense, very wonderful side that has to do with femininity. The poses, the glamour, comes from a place of confidence and empowerment. It’s this, but above all, it’s also a way of communicating. In the vogue battles what happens is that two or three people connect with one another. They try to embody the 5 elements of vogue and when they embody these elements they tell the world who they are, with confidence and beauty and their feminine side. They present this intense side of themselves to the outside world.

Turbo is the first ballroom that’s ever happened in the city of Buenos Aires. We’ve taken this culture and incorporated elements and traditions from our own culture and our reality in the local queer scene that we live day to day here in Argentina.

This Saturday is very important to us because we’re celebrating the end — at least symbolically — of the pandemic. It was really hard for us, just as it was for many people. For us, it meant not being able to have any events, aside from a few online events, and a few others that had a lot of restrictions. So it’s a reunion and a celebration, commemorating Pride as well as being able to meet in person again.

This Saturday we’ll be playing disco music, which we love, as well as house music. We’ll be featuring some categories and Mina will be hosting. 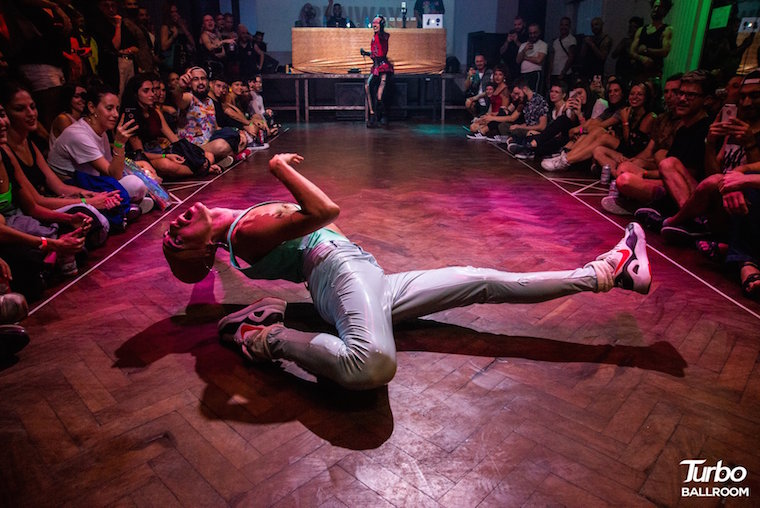 Tell us more about these categories.

There’s Vogue for Beginners, which is people who have been taking a class and are just showing their dances to the public for the first time. Then there’s Vogue Queens who are the ones who have experience battling in the femme vogue battles, which is what we would call the more global style of voguing.

Then there’s Freestyle, which I love. You get to throw out whatever style of music you want and you always get incredible responses from the dancers. There are no rules or steps, and magic moments always occur.

The category Runway also comes from the global ballroom culture. There are two forms, the American and the European, which are two different ways to walk. Ours is much more performance-like and anything can happen. Sometimes it’s grotesque, sometimes it’s like a normal runway walk, but participants always model the outfits they made themselves. 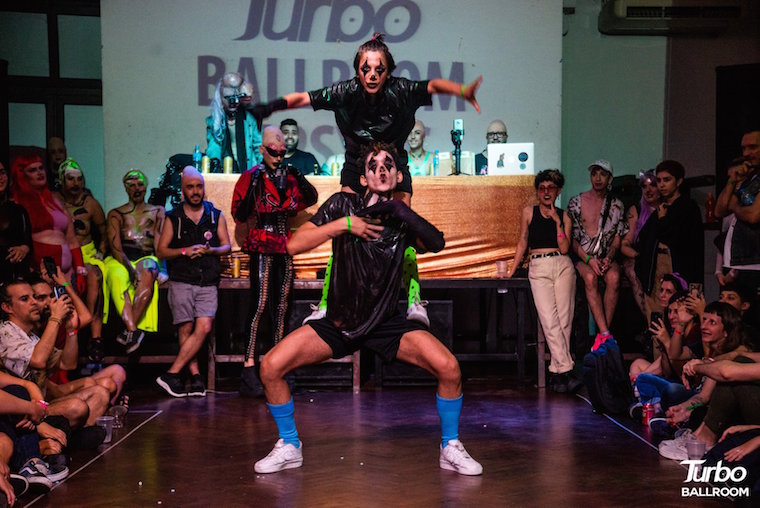 The majority of these events have a theme. Who decides the themes and how?

This particular event won’t have a theme, we want to make it as open as possible since we’re following the Pride March. But generally, I pick the “fantasies,” which are the themes of each Fiesta Turbo. These are parties that start at night and go until 7:00 am that are more about dancing, less ballroom. But the ones for the ballroom, we all pick them together as a fixed staff. What we do is sit down, start planting seeds, play around, and see what comes out of it. It would be difficult to tell you that we have a specific formula for choosing each “fantasy,” because each has its own particular story and it’s more a game than anything else. We always try to represent the style of the times and to make something that the people can interpret on a whim that relates to something happening right now.

For example, the last “fantasy” of the party was Marginalized Opulence, and it came to me because it has to do with the interplay of the super glamorous and fashionable aesthetic of vogue, which aside from being very sophisticated and expensive and formal, originally had to do with appropriating the culture of the rich. The marginalized, in this case, us, appropriating the rich. We thought about the slaves in South America and so when we put on the event we tried to transmit this. The game was to pretend to be super rich and lavish, but in reality, it had to do with the conditions of the marginalized and that precariousness. In other words, you don’t have to have a ton of money to play around with lavishness. 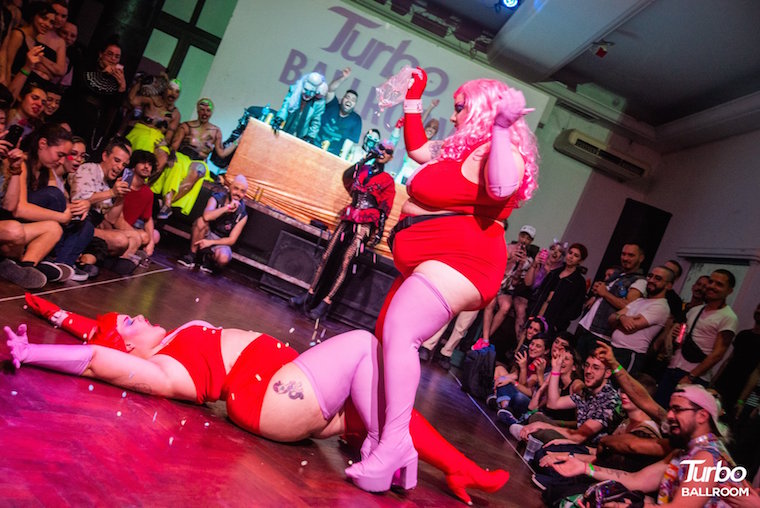 In the description of your event, something that really stuck out was that you declare it a space for everyone. What does that mean exactly?

When I say it’s a space for everyone what I mean to say is that it’s an open space, one that’s open to different body types, genders, ages. Normally each space has its hidden guidelines and even though it may not be said explicitly in a manifesto or in writing there are certain rules: not to show certain body types, or to not be open to certain ages, to not show certain ways of interacting with one another, like a gay kiss or whatever it may be.

These guidelines condition these spaces, so it’s important to declare that we are all queer. Those who aren’t gay, are trans. If they’re not trans, they’re lesbians. Or if there’s a female producer who is cis, she’s pansexual. In general, our community is always a large part of those who normally dominate the sexual and gender dissidence in society. Now that I’m thinking about it, the word “everyone” sounds kind of negative because saying everyone you could be including people who are racist or fascist, but in this case, I don’t mean that. I just mean it’s a space open to many ways of being.

What do you think is the importance of this sort of “real inclusion” your events always seem to promote?

When we talk about real inclusion, for example in relation to the body, these are topics that we make problematic. In relation to body type, for example, I’m fat, and in general, larger bodies are rejected, or hidden, or people think that these bodies can’t be sexualized, or can’t dance, or can’t be leaders of a movement, or can’t reach high positions in the fashion world. And in thinking about this, we always try to create our teams with people that are on the same page. It’s something that we’ve given a lot of thought to.

This space has to have many different body types even within the staff, the hosts, the DJs, whatever. I mean, obviously, talent is important, but there are so many talented people that are left behind in certain spaces for how they look, for their body type. So we think this is problematic and we try to generate these points of visible integration of fat bodies, in this particular instance, into these spaces.

If you’re not in the scene or haven’t joined this community (yet) how do you find out more about events like these?

Coming out on Saturday would be the best way to get to know the people and see what the scene is like. But if not, like us on Facebook or follow us on Instagram. We post all our events. We also have vogue classes and more but all this information is on our social media sites.

So Saturday, November 6th, after Buenos Aires Pride March, head on over to Beatflow (Av. Cordoba 5509) to enjoy this wonderful event. Advance tickets are sold out, but you can still buy them at the door.