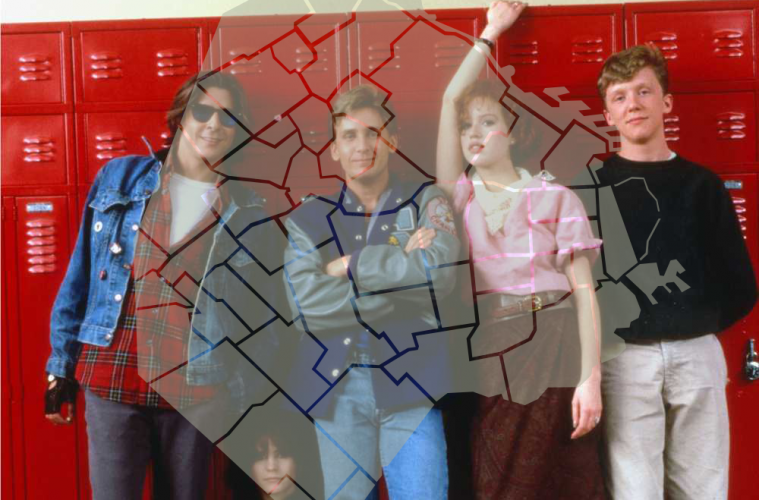 Memes spread like wildfire, and memes that speak to regional quirks – that we can point to and say “oh my God, that’s so me!” – even more so. You might remember this trend on social media from a couple years ago where characters from John Hughes’s seminal 1985 teen comedy The Breakfast Club were compared to various areas, regions, social networks, meals, and the like.

Of course, the fact that the characters from The Breakfast Club fit societal archetypes so beautifully – the nerd, the jock, the princess, the rebel, the freak – makes them especially fitting for this type of treatment. It all started when Daniel Pewewardy (and let’s take a moment to just bask in the glory of that surname… okay, done), a comedian from Wichita, Kansas, decided to apply those archetypes to cities in his home state. The image took off, and suddenly Facebook was flooded with pictures of the five teenagers with hastily-written text slapped over them as people drew parallels with their own neighborhoods, cities, states, and so on.

It’s a pretty old meme by this point — ancient by Internet standards — but still, we at La La Lista have decided to put together our own version of this meme for your browsing pleasure. We have no doubt that there will be disagreement over our characterization of some of these neighborhoods, but hey: what is the Internet, if not disagreement?

Why let the fun stop there? Let’s apply the same logic to some other John Hughes movies and see how many people we can infuriate in a single article!

Though directed by Howard Deutch, it would be hard to argue that Pretty in Pink doesn’t qualify as a “John Hughes film” (he wrote the screenplay and served as Executive Producer; more importantly, it uses his core cast and explores the themes that would go on to define his career). It’s probably the second most iconic and well-rounded of all of these films. This is the point in the article where we start to realize that we are using this piece as a roundabout way of ranking our favorite John Hughes movies in order of preference. Oh well. Just roll with it.

As far as the core cast of characters: it would be hard to argue against Andrew McCarthy’s stylish, decidedly affluent character Blane McDonough as anything other than Puerto Madero, the most expensive neighborhood in town (the movie’s central antagonist – James Spader’s Steff McKee – is also from this same neighborhood). If we extended this exercise beyond the confines of CABA, he’d be Pilar, or some exclusive neighborhood in Zona Norte. Meanwhile, Molly Ringwald’s scrappy and sartorially gifted character Andie Walsh is from Once, which hosts a plethora of dressmaking and fabric shops. Finally: bohemian and hopelessly romantic, Jon Cryer as Duckie is the perfect embodiment of the funky, artsy neighborhood of San Telmo.

A stone-cold teen comedy classic, but still somewhat underrated in terms of John Hughes’s oeuvre, Ferris Bueller’s Day Off is home to so many elements that would eventually become staples of the genre. In fact, even if you’ve never watched the movie itself, you’re probably familiar with many of its elements by the sheer force of pop culture inundation.

So which barrios best represent each of the three main characters? Well, let’s start with Alan Ruck’s Cameron Fry. A good guy with a good heart; funny but not laugh-out-loud hysterical; smart, but not a geekazoid; interesting in his own right, but still very much a sidekick. For this reason, we are are calling him Almagro, a neighborhood which has so much going for it but lives in the shadow of his more famous neighbors. Poised, ridiculously attractive, and very cultured, Mia Sara as Sloane Peterson is a great fit for the neighborhood of Recoleta. And finally we have the titular character of Ferris Bueller – the only time in his life that Matthew Broderick ever seemed cool. A suave, irresistibly fun dude who somehow manages to avoid coming across as an unbearable jerk (though he may be a sociopath), he captures Caballito’s vibe to a T.

And finally we come to Sixteen Candles, a movie that is decidedly the weak link in this group of films. Though not without its charms – particularly the strong, sympathetic performances of Molly Ringwald and Anthony Michael Hall – the movie is a mess of slapstick silliness and painfully outdated politics, mostly lacking in the heart that would characterize other John Hughes films.

Still, which neighborhoods correspond to which characters? Well, let’s start with “Farmer Ted” (Anthony Michael Hall). There comes a point in exercises like this where one has to take stances that will be especially unflattering to certain neighborhoods. And, unfortunately, Farmer Ted is a bit of a sniveling, sex-crazed creep. So instead of alienating a good portion of our readership by telling them that their neighborhood is trash (like this character is), we’re going to lean in to some data: according to our hasty research, the neighborhood of Flores happens to have the strongest concentration of telos (albergues transitorios, or simply, sex motels) in the city. This seems fitting for a character who spends the majority of his screen time obsessed with getting laid.

Meanwhile, Molly Ringwald’s Samantha Baker is smart, funny, attractive, and spunky, but she is somehow overlooked by her family and social circle. This is why we’re matching her with the very underrated neighborhood of Villa Ortuzar. And finally, Michael Schoeffling as dreamboat Jake Ryan is a great match with the affluent Colegiales, which also boasts the highest level of quality-of-life in the city but isn’t an obnoxious jerk about it.

There you have it. Four iconic John Hughes movies, four teen casts matched with porteño neighborhoods. Was this exercise worth it? Did it illuminate anything about the city we’ve chosen to call home? Was this anything other than an enormous waste of time? Heck if we know. But it’s got us in the mood to listen to some eighties pop, and we’re calling that a win.