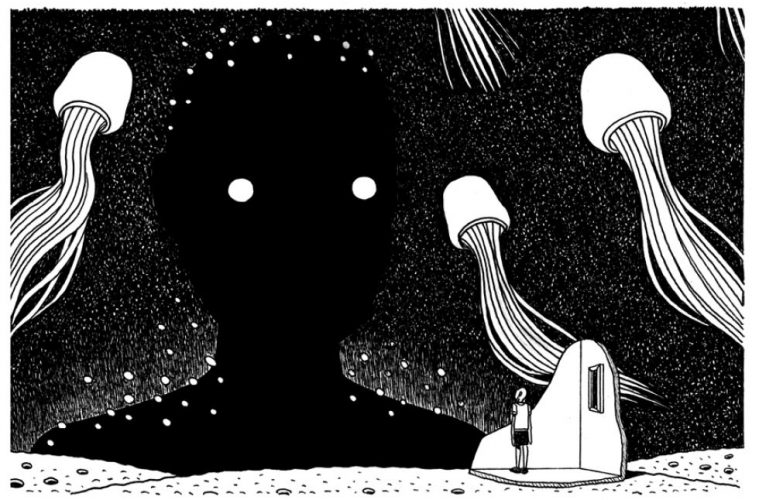 Welcome once more to the corner of La La Lista where we keep up with what’s new in the world of independent Argentine comics. In the previous installment we explored horror and its relationship with memory in Athos Pastore’s Galgo, and on this occasion we are going to stay along the same lines to analyze the strange lens of Niño Oruga, the new graphic novel by Pedro Mancini. The book, published by Hotel de las Ideas, finds the author exploring the figure of his grandfather in a beautifully peculiar and unique way

Pedro Mancini has become a kind of cult figure among local comic book readers thanks to the strange universe created through his illustrations and the “auteur memes” that he shares on his social media: a mutant pastiche where his taste for the iconography of horror mixed with his ability to transform the misfortunes of being a precarious illustrator into great memes has made him one of the most common answers to the question “who should I follow on Instagram?”

One of his authorial hallmarks is the blend between reality and fiction, where in titles such as Alien Triste (Hotel de las Ideas) and No Soy Hordak (Loco Rabia) Pedro linked episodes of sadness or uncomfortable confessions through a dark, macabre filter, where a human face is instead an alien worm or the face of a He-Man villain, seasoned with a pinch of humor and a healthy amount of absurdity. These scenes become startlingly relatable. On Niño Oruga, Mancini combines a constellation of characters from his personal universe with an autobiographical story, exploring the relationship between his adolescent self with his grandfather Ricardo Pasano, a film and theater actor who was a notable figure in 1940s Argentina.

Victor is the young protagonist of this story. His face is permanently hidden behind a mask. His family finds him to be very quiet and a little strange, but they know very little about his inner monologues and his strange dreams. He is asked by his family to live with his grandfather for a few weeks; he is old and needs someone to take care of him. In the first pages of the book you can perceive a family tension and a silence at the table that seems to cover family secrets, but the moment Victor crosses the threshold of his grandfather’s house, the story is transformed and we’re no longer in an ordinary family autobiography, but rather in the Ultramundo, a universe inhabited by fantastical creatures of whom his grandfather is the ruler, known as the Anti-ser (or Anti-Being).

In that house where every door or window is a portal to a parallel universe and where a scary creature can emerge from any corner, Victor will gradually discover the inner universe of his grandfather in dream sequences reminiscent of children’s stories such as in Alice in Wonderland or Spirited Away. Through his encounter with characters as bizarre as they are endearing, Victor will try to unveil the mysteries about his grandfather, who was a beloved and recognized star and now, in the solitude of his home and old age, he has become a despot of the Underworld, ready to destroy everything in his path.

There is a quasi-magical element that the places and characters illustrated by Mancini give off: The alchemy created by the black marker cross hatching on the page manages to bring the reader to an atmosphere that’s somewhere between oppressive and dreamy, where the creatures that populate this world are capable of horror and tenderness in equal parts. As we accompany Victor on his way through these surreal spaces, each of the landscapes and characters he encounters are loaded with such visual power that makes us think that, just maybe, they’re not the product of the imagination of an illustrator, but of a space that we are all capable of knowing (as long as we connect to the ultra-deformed channel of our subconscious).

Crossing the Underworld will definitely have an impact on Victor; it will compel him to remove his mask once and for all, and learn more about himself. He will form new friendships and start to understand this strange realm through the characters’ testimonies.  At the end of the day, both he and the Underworld are changed, and in their confrontation with the destructive drive of the Anti-ser, a bond will be formed. A bond of identification and reconciliation with the darkness did not know lurked inside himself.

Niño Caruga is a story that mixes crudeness and fantasy to create a beautifully cathartic piece about old age and legacy, while also dealing with the “unspeakable” that lives within the heart of all family silences. It also serves as a deepening of the author’s universe for readers of Mancini’s previous work, where they will find characters and various connections to his other works. But for those who approach a Mancini comic for the first time, this book serves as the perfect “origin story” not only of the author, but of a vast universe where we can all find pieces of ourselves.

Whoever dives into the pages of this book will emerge from them a little more ultradeformer and a little less lonely.