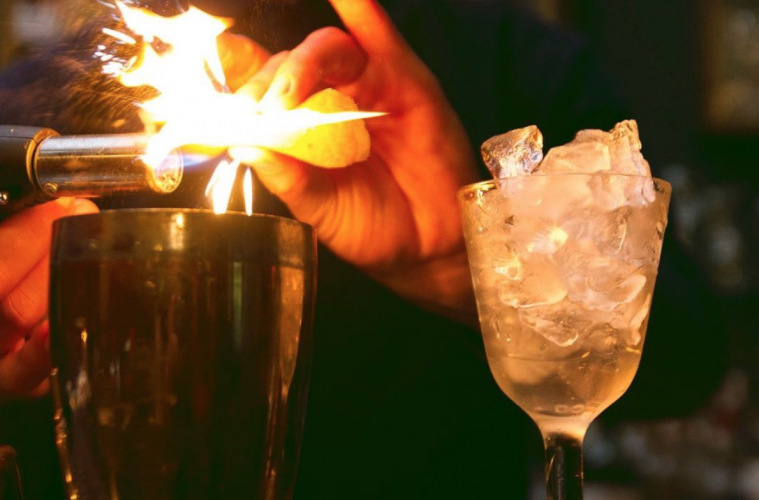 I Need a Drink | Doppelgänger Bar

Martin Pol said “there are many clueless people who go to breweries out of necessity.” No need to worry, Mar, we’re here to fix that.

Night falls and thirst takes over. We venture back into the porteño nightlife in search of the perfect la-la-list of bars where you can enjoy some good times and good drinks. This tiem around, we visited Doppelgänger Bar, a place I’d been meaning to visit for a long time. Thankfully, I’ve found the perfect excuse to finally do so.

Doppelgänger is a German term that means “walking double,” referring to the old belief that we each have a double somewhere in the world that looks exactly like us, but is the complete opposite in personality.  This bar aims to celebrate the opposites: the working-class part (vermouth, fernet, abundance and wanting to share with others) and the bourgeois part (old fashioned, whiskey, Martini glass and the desire to celebrate onelself). GREAT for people with multiple personalities, like me…

This time around, Maga and I decided to bring our dates along (we weren’t about to let the dim mood lighting go to waste). The small spaces are a good excuse to sit close to each other and get a little amorous after the second drink. However, it’s still a comfortable place to go to with small groups of up to 4 or 5 people.

Four drunks walk into a bar, they sit at the bar and…  I forgot the punchline. Once there, we were tended to by Iván Goodbar (a great name for a bartender). He was extremely cool, making fun jokes and providing great service.  GOODBARtender immediately filled us in on the extremely long drink menu. Beyond the 45 auteur drinks they carry, they also have a large book with almost 200 cocktails that were on the menu at some point. Iván told us they intend to continue the series with more installments that show off their many drinks. The kind of book series you’d find in a serious bartender’s bookshelf.

We jumped right into it. Maga’s significant other, Martín, ordered the drink of the week, a Persiana Americana. “I ordered it mainly because of the title. Long live Cerati. The king is dead, let’s drink in his honor.” I think Martín had already been drinking. All the ingredients coexist harmoniously, without getting in each others’ way. “They’re two drinks in one, because when you get to the end, there’s the Fireball waiting for you.”

Surfing through the menu I found something that immediately captured my attention. Blue cheese and walnut black olives? Pfff, give me 10. I ordered a Chacarita City. One of the best garnishes I have ever tasted. “A penalty kicked hard and straight through the middle is always a goal,” Tin said. He was right. The drink had an appealing bitterness while remaining balanced. The presentation is elegant and beautiful. A very particular flavor that’s a bit indecipherable.

My date and photographer Catalunia ordered an El Hombre Invisible, which she described as a really fun lemonade. Fresh, understated, and aromatic. “A cocktail to drink repeatedly at a daytime wedding” and “the definition of freshness.” A great summer drink that can easily be enjoyed during a cold August. “It’s a cocktail you could order over and over again while you lounge at the pool,” added la Maga. Luckily for Martín, they don’t have a pool.

Iván noticed that Tin and La Maga were looking over the bottles at the back of the bar, so he invited them to pick the ones they liked most and, if a good combination came out of it, it would become a candidate for the drinks menu. They let their imaginations go wild and picked a Tanqueray de Sevilla, St. Germain and Angostura (a very modest drink). Iván added a touch of vermouth and magic to create the drink and I gave it my stamp of approval. Thus was born the Parque Retiro, which hopefully will continue to be served at Doppel.

Already at the last round, Iván was wrapping things up and we asked him a few questions to learn more about the person behind the formidable bar.

What’s your favorite drink to make?

Dirty Martini. It’s a very iconic drink to put together at the bar.

What’s your favorite cocktail to drink?

If I’m familiar with the bar or the bartender, I order a Dirty Martini. If I don’t know them, I’ll get a Gimlet to decide whether I get another cocktail or order a beer instead.

Where does Iván drink in his free time?

Chabrés, where Oscar Chabrés works. He’s a historic barkeep who has magical powers behind the bar.

Before leaving, they invited us to have a shot of the Doppel Fuck. “So that you’ll want to return.” A light, tasty secret recipe which, apparently, varies often. Indeed, I do want to return and try more Doppel Fucks, and attempt to guess what’s in them.

Doppelgänger, step to the front. We’ll be evaluating these five areas on a scale of 1 to 5 La Las.

Ambiance: 4/5 La Las. Not a lot of paraphernalia, but some nice and memorable details. “Dark and vintage.” Very nice mix of music, but a little on the loud side.

Experience: 4.5/5 La Las. We had a really nice time with our respective dates and with friends, so it’s a malleable experience..

Returnability: 4/5 La Las. You have to visit this bar. It’s really good to return to, be treated very nicely, and keep becoming acquainted with the wide selection of cocktails.

Congratulations, Doppelgänger, you got 4.5 La Las, which means you pass with flying colors. I’m very happy to have finally visited a bar I’d been wanting to get to know for a long time, and a bit frustrated that I hadn’t visited sooner. We recommend it for small groups, but it’s ideally suited for a couple’s date night. Especially if one of you has never been before. It’s also a good place to bring an expat who’s spent all afternoon wandering around San Telmo and wants to end the night at a world-class, but extremely Argentine, drinking establishment.