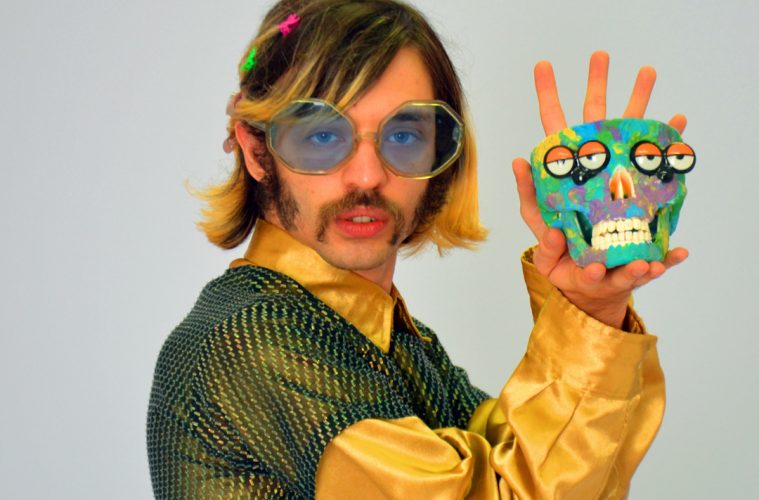 Interview | Getting Weird and Wonderful with Willy Fishman

One of the founding members of the band Gativideo, Willy Fishman, is well known for his exploits whether it be as a guitarist, vocalist, or even as an illustrator. Just by taking a look at his vibrant Instagram, you’re able to get a pretty good idea of the aesthetic that Willy is trying to convey.

Throwbacks and nostalgia ooze out of every crevice without lampooning themselves, providing a refreshing layer of familiarity while exploring moderns themes. Also, he certainly has accomplished a lot with his previous band performing at Lollapalooza Argentina back in 2019, and more recently in April after moving exclusively onto his solo venture he released the uber groovy ‘Guachi Guau!’.

A cacophony of crazy samples blended with Nu-funk takes you on a ride through this glorious 10 track bopping release. Each element is so well structured that it deserves to be listened to in full, back-to-back, to entirely grasp the love and care that went into ‘Guachi Guau!’ and to fully understand the crazed beautiful mind of Willy Fishman.

I’m curious in terms of imagery and aesthetics, why do you relate much more to the past than the future?

I don’t know if I really have a preference for the past. I let my tastes guide me and that generally points towards older music. I enjoy songs and albums more as they age over time. Something kind of like what happens with lentil stew, where it’s much tastier the following day.

It often happens to me that if someone releases a song, I don’t understand it well when I first hear it. No matter how good it is. But if I listen to it a year later, there is something there that grabs me more. I still don’t know why. Perhaps at another time, I can explain it better.

Self-perception also changes over time. As soon as you show the world something, you may go through a phase of rejection. You may think that what you do now is much better than what you did before. But over time you listen to your own work and think “wow, did I do this?” I think that is why there must be so much recycling of “dead” tendencies.

What is it about nostalgia in your music and artwork that you feel resonates with your audience?

For me, nostalgia is a kind of refuge that provides warmth. It protects me from the anxiety that thinking about the future generates. I honestly don’t know who my audience might be, but I imagine they feel something similar about it.

Something that I feel can be missing in a lot of newer music is that element of fun and shameless joy which I feel exists in both Gativideo and your solo project, is this intentional? Do you aim to write music that both you and your audience enjoy or is it just natural?

I think it’s natural. We will never be able to show ourselves 100% as we are. I guess that’s the artistic quest. I learned to express myself by laughing at what I do. It even makes me laugh sometimes when I get very serious.
I mean, The Cure tends to express themselves in a more “emo” way in their songs but I suppose they must be very funny people too.

How was it to perform at Lollapalooza 2019, was this something you expected to happen?

It was a long time ago, I don’t quite remember much from the performance. I just remember that I was nervous and that I smoked like 20 cigarettes in 15 minutes before the show. I do not recommend it.

And the truth is I don’t know if we expected it or not. Certainly not when we first started out. Our first show was when we were 16 years old, we played on a friend’s terrace and her neighbors threw empty bottles at us to shut us up. We were far from thinking that the band could take a serious direction in the future.

One of the highlights for our crew at Lalalista was your show at Niceto last year, Fantástico y Maravilloso Show de Gativideo, how did you get Diego Capusotto to appear in a video for you guys to promote it? Also, can I just add it was one of the best intros for a live concert I’ve seen in a long time.

Diego is a friend of Nestor Montalbano, Renzo’s father. Nestor and Capusotto worked together on a lot of shows and that was the link. The situation was quite bizarre: We wanted Capusotto to act in a sketch written by us for the show.

We had him there in front of us and no one in the band had ever been in that role of “director” before. On top of that we are quite shy and that did not help. Luckily Nestor took charge, stood in front of us and ended up directing him.

You recently premiered your music video ‘Bye, Bye’ what was the inspiration behind it?

The video for “Bye Bye” was made by Ricardo Lara, from Mexico. It was really a very nice surprise for me. One day Ricardo wrote to me asking if he could make a video for one of the songs on ¡Guachi Guau!. He showed me his 8-bit animations. I suggested that he make a video for “Bye Bye” since that song is inspired by the music from Mario Paint, a video game for the NES console. And almost without any other suggestion on my part Ricardo made a great video.

How do you think the sound of your solo project differs from Gativideo?

It’s a lot of things. It is very different to write by oneself than to write with my bandmates. There are other freedoms and other limitations. To start with, they are very different proposals from each other. Gativideo is a band that is older and has certain “labels” that partly define their sound, as well as a distinct compositional process. ¡Guachi Guau! is an album where I experimented a lot with samples. I cut pieces of songs that generated something in me and pasted them to create something else.

It’s also kind of a challenge to create something new without having that existing identity to help you direct it a bit.

Can we expect more releases from you and Gativideo?

My idea is to make music videos with my friends and people who are interested in the project. Continue enriching the imaginary of ¡Guachi Guau!. As long as I have the necessary inspiration to make material,  I will release things, either as “Willy Fishman” or with whatever project I’m involved with.

Regarding Gativideo, we are preparing music videos and getting ready to launch our second album. And finally, on the other hand, I joined forces with my friend Sofi Vera to work in a sculpture theater based on some of my drawings and on her works as well.

The idea is to hold an exhibition with theater functions in a new gallery called LAR.