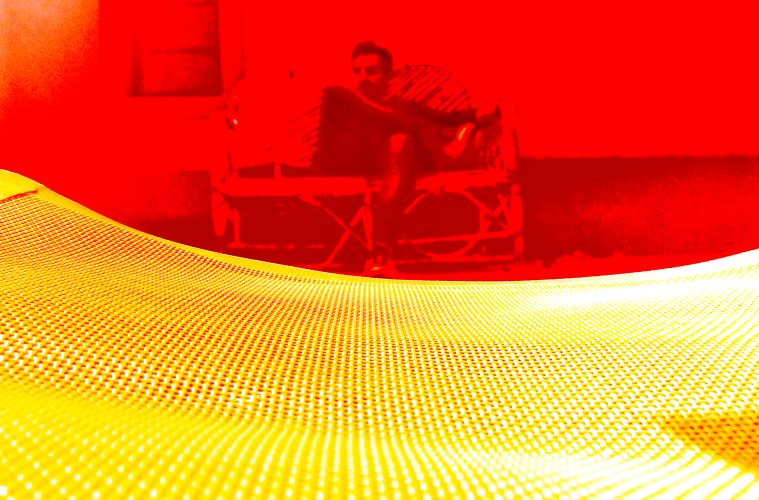 Distor is the post-band project of Juan Pablo from the aptly named Jota Distor y Los Esqueletos who released two strong EP’s before the band decided to move onto new projects birthing this solo venture for the guitarist/vocalist.

Before Distor, he made appearances in the bands Astromartha and Maya, collaborating with the same band members many years later. Soon after this period, he formed Jota Distor y Los Esqueletos while simultaneously playing guitar in the experimental rock group Pobres Modernos.

I reached out to Distor after reviewing his track ‘Trae El Mar‘, learned the great news that he is releasing a new track each month until September. I think it’s safe to assume that there may be a new EP or album on the horizon being released through the local collective Capulta Discos, but I wanted to find out more before his next release.

How did Distor come about?

Distor was not intended as a band. It’s a recording project. I’d been thinking about it for a long time and it just came out like this. It takes me back to my beginnings in music, where I started with just a portable studio and a drum machine, and I would sing over a loop while playing a distorted guitar.

What do you think is the main difference between Jota Distor y los Esqueletos and your solo venture?

With Los Esqueletos I had some songs, I passed them along to a couple of musician friends (Ezequiel Rozemblum on drums, Marcos Rocca on bass, and Ezequiel Martinez Luque on guitar), and it all started coming together. We were together for a couple of years; rehearsals, gigs, 1 album, and 2 EPs. I am very grateful to them, I learned a lot and indulged myself quite a bit.

After working in a group, do you think it can be difficult to find your own style once you have found a rhythm with others?

Making songs is something natural for me, it is part of my life. There are times when it has been easier to develop them. What is built with others cannot be replicated alone. Everything has its time, you have to go with the music; the style is transformed as well.

In Distor most of the drums are still done by Ezequiel and the basslines are by Mauri Motille. Ale Mendez Sierra recorded the synth in “Fondo” and Celes Carrizo the electric drums in “Fagocitosis”, a song that will be released shortly.

What do you think about the current rock scene in Argentina?

I like a lot of things, but I don’t like them that much. It seems like there is an empty space between indie and alternative. That’s where I am.

I agree with that. Hardships unite us. Only this one we’re in has managed to keep us away. There is always music to come that excites and breaks what seems lethargic. We must be in the moment in history with the most amount of music and I do not doubt that we will have even more.

As far as the renaissance, that seems to me to be linked to life itself, and I hope it happens to us or we’re screwed.

I came across your latest single on a Facebook group, which got me thinking: What effect do you think social media has had on the reach that artists now have with their music?

It’s one of the only ways to make yourself known. Because you can be doing a lot of things, but if nobody knows about them it’s of little use.

But on the other hand, it is those same algorithms that can hide you or lock you in a circle from which you cannot break out.

What has been your most inspiring moment in the last year and why?

Moving into my own home. A house-made from scratch, with a lot of effort, but where every corner is a place to explore and modify. I try to translate that into my music. Of the 4 songs that I am going to release, 3 are experiments, explorations.

We did an article in 2020 where we asked our writers about the art that kept them sane during the quarantine. What keeps you sane?

The Sopranos, Larry David, Family Guy, YouTube, and some Byung Chul Han definitely helped me. But without a doubt, I’m still sane thanks to my 3-year-old son, my family, and the place where I live.

I see you also released music through Capulta Discos. What do you think is the advantage of releasing music through independent labels like Capulta compared to doing it alone?

Catapulta Discos is a very nice project that emerged a few months before the pandemic. It is a collective of musicians. It is open to all who want to join and in addition to spreading their music, and that of the other members. I enjoy being a part of it and I hope it continues to grow.

You mentioned to me in one of your messages that you were going to release a song every month until September, is there a reason why you are doing this?

For a few years, I have been making EPs of 3 or 4 songs. As I am involved in all the stages and I like and am passionate about each one, releasing them one by one gives me the right time between composition, recording, and mixing. And at the same time, it is what keeps the wheel turning.

If you were to explain the sound of Distor to someone else, how would you describe it?

The sound between the ball hitting the goal post during the last minute of the match, and the reaction of the crowd. That space where you don’t yet know if it is a goal or not.