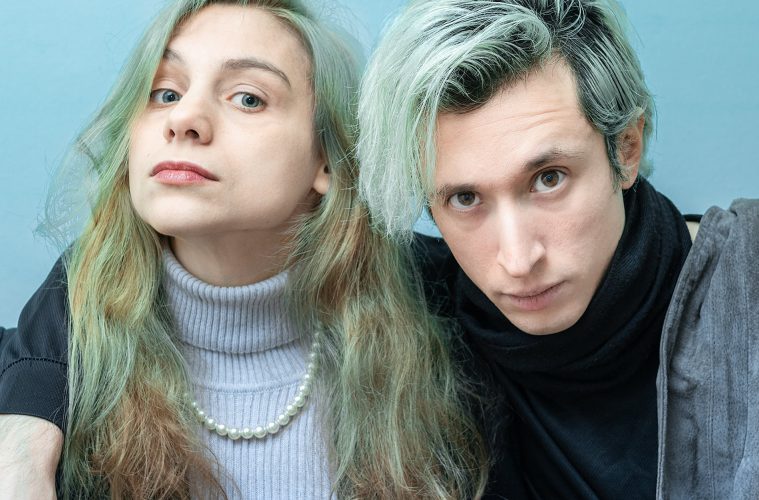 Vomiting Bunnies is the project of the artistic duo Vale Curcio & Jörg R Singh, a couple of musicians and audiovisual artists from Argentina. The pair started working together as sound designers, creating and communicating their artistic freedom through a mix of pop music, trip-hop, vintage synths, and soft rock.

Equally, they have conveyed a wide artistic scope encapsulating many different realms, making the project a more multimedia experience rather than sticking solely to one channel. Among other great news, the band was officially selected for a few film festivals for one of their earlier released music videos , Too Late’, and now have just released their latest single ‘Let the Bunnies Talk’.

I reached out to the pair to find out more about their latest release, how different mediums influenced their general aesthetic and why one of theit videos was just Jörg sipping on mate.

The lockdown was a driving force for many to take up new interests and explore projects, so how were you two brought together in this situation?

The quarantine, at the beginning of 2020, found us both under the same roof 24 hours a day. We were several kilometers outside of the city and with more free time, we were able to dedicate time to ourselves and working on creativity. There was that “end-of-the-world” feeling in the air, with a siren that would sound to announce the curfew, police cars with loudspeakers, and, of course, a vaccine that didn’t exist yet, and nobody knew hardly anything about the virus. That was the context in which Vomiting Bunnies was born. Now we live in Buenos Aires, but those weeks were like something out of a movie. Although we had worked together on audiovisual projects before, this was the first time we decided to make music under the same name.

Uncertainty and also self-inflicted shame in procrastination acts as a major theme in your song ‘Too Late’, do you feel this resonates with many people because of the fact many of us went through these experiences?

Yes, of course. Writing, composing, recording, and producing that song was an act of catharsis for us. We literally vomited up what we were feeling. It wasn’t just the pandemic, these emotions are part of postmodern life, and any person with a minimal degree of sensitivity is going to experience them at some point in their life.

“For madmen only” is another response I could give, to quote Hemann Hesse in Steppenwolf, because a madman is someone who doesn’t quite fit into the predefined mold, because of their sensitiveness. These are experiences that we all go through because of our sensitivity (or our madness) because deep down, we all know that nobody fits into that predefined mold, but sometimes we feel like we have to pretend, and we disguise ourselves as sane.

Your youtube channel and spotify features various covers from a huge variety of artists, have these artists played a larger role in defining your original sound?

Some of them yes and some of them no. The second cover we put out was “Six Feet Under” by Billie Eilish, and you could say that her music was somewhat of a jumping-off point for Vomiting Bunnies. As was Portishead, and we had a great time doing the cover of “Roads.” And there’s other artists who weren’t necessarily direct influences, and the challenge was to rethink those songs with a more low-key, intimate nuance. The exercise of covering a song, and doing it so that it evokes emotions that aren’t present in the original, or that are more implicit in the original, was like a game of creativity, it’s super fun, and it’s a great way to practice composition and to find your own style.

What alternate art or media played a part in developing the overall aesthetic of your sound and visual accompaniments?

We both come from an audiovisual background, so everything visual that goes along with the songs came out of the music in a super organic way. All of the videos and photos in the project were made by us, including the covers for the singles. Many of those covers are paintings done by Jörg.

Do you feel that your other artistic endeavours have played a part in helping develop music more easily?

I wouldn’t say that it makes it easier, because they’re different forms of expression. They’re different languages whose messages are translated through emotions and experiences. Making a cover for a single is something as personal and natural for us as putting up a canvas, or setting up lights while drinking beers or coffee on a Saturday evening, listening to our song on repeat and allowing ourselves to absorb what is being transmitted by the music. It’s very us, and it’s much more practical to do everything ourselves, than having to explain the concept of the song to a visual artist friend. When it comes to transmitting an idea in words, there’s a sort of immensity to the music that is always lost. Between the two of us, a simple look is enough to know if we’re on the right track or not, there’s a lot of non-verbal communication, there’s chemistry. We’re not saying it wouldn’t be great to have a team with more people, but, that chemistry is crucial.

I couldn’t ignore the video titled ‘DRINK’ and it’s homage to Andy Warhol’s video of eating a Big Mac, what inspired this and also do you think in itself is a form of pop-art?

That video is one of our favorites, and it all started as a joke. Jörg has died their hair white, and the similarity to Andy was a cheap joke. Then we started to reflect on pop art, popular culture, and the absurdity of postmodernity. The idea was to remix popular US culture of that time (the Big Mac) with our pop culture (the mate) and replicate that mundane day-to-day setting of the original piece. The result was a parody-critique that speaks of a globalized world where any random fragment of life itself can be made into a product for social media consumption, and how that makes contemporary art the reflection of a present dominated by frivolity and absurdity.

Also why did you choose to sing in English for the majority of your output?

The short answer would be “because why not?” But, digging a little deeper, the music we grew up listening to was in English, and that influenced us a lot. For example, the first two bands that Vale (vocalist of VB) really got inspired by were Queen and Pink Floyd, and Jörg as a 5-year-old was a Michael Jackson fan. Those artists have very unique styles, and there aren’t references as influential as them in other languages. Even though Argentina has influential artists like Charly, Spinetta, Sumo, Cerati, who we also love, our earliest influences were in English, and it’s really hard (and even pointless, you could say) to try and force our compositions to come out in Spanish when in our heads we hear them in English. Also, nowadays, music has fewer limits and borders than ever in history. All genres, cultures, and even languages, are mixed together. Without going too much into it, the most popular genre in Argentina today is trap, and many of the lyrics are written in “spanglish.” We’re not opposed to writing songs in Spanish at some point, but we think that it’s the song itself that has to ask to be written in a certain language, and not us that ask it.

Taking a look at your latest single ‘Let The Bunnies Talk’ you take a more dark pop approach and the breakdown is stunning, what inspired this track?

The song was inspired by literary magical realism, and it’s constantly playing with a fine line between the real world, and the dream or make-believe world. Isolation, and the real world granting space to the virtual world, leaves us in a place that’s not clearly defined, and constantly goes back and forth between what’s real and not real. Far from expression opposition to technological advance and the evolution of communications, we believe that the song evokes a concept very much of the times we are living in every day, and at the same time, allows itself to be influenced by the work of great Latin American authors.

Have you guys got any plans to do any larger releases such as an album or EP?

That would be awesome, and a huge challenge from which we would definitely learn a lot. But for now, we’re working on putting out singles, for several reasons. On one hand, there’s the time factor, and it’s an important one. Making an LP or and EP would require time that we don’t have right now. We’re of the belief that if you’re going to do something, you should do it right and take your time.

On the other hand, we think that putting out singles is the best fit for the present historic context. There’s a cult of immediacy and spontaneity and we don’t disavow that, on the contrary, we prefer to adopt it and transform it into art that reflects the current times. We live in a present, which, with all the good and bad it entails, is super interesting from a cultural perspective. We’re a generation for who don’t find constant change and evolution traumatic at all. We incorporate new technologies, we adapt to new social paradigms, and we’re constantly tearing down prejudices. We flow with that, and we think that the single format does as well. It allows you do reinvent yourself at every step along the way, and each new song is a photograph of our actualized internal world, that allows us to express ourselves in a more transparent way.

An LP is a work that takes more time and development, which we would love to be able to do, but at this point in time it’s not possible for us.

What aspirations do you have for this project aside from releasing more music?

The idea with this project is to take it as far as it allows itself to be taken. For the time being, our goal is to make more music and reach more people. We’re developing a series of streaming shows, but we want to be more picky when it comes to sound quality; we want it to be an experience. The songs have lots of layers of sounds and instruments, even in the parts that seem more minimalist. And that’s what we’re working on incorporating into the duo format, without the songs losing that essence that they have in the studio versions.

What’s next for us after those shows and more songs? Whatever happens to come along, we’re open to collaboration proposals, a festival or two, record labels…honestly, we’re not trying to put a cap on the project, and meanwhile we’ll keep working hard so that we’re ready to take on whatever opportunities that could arise.