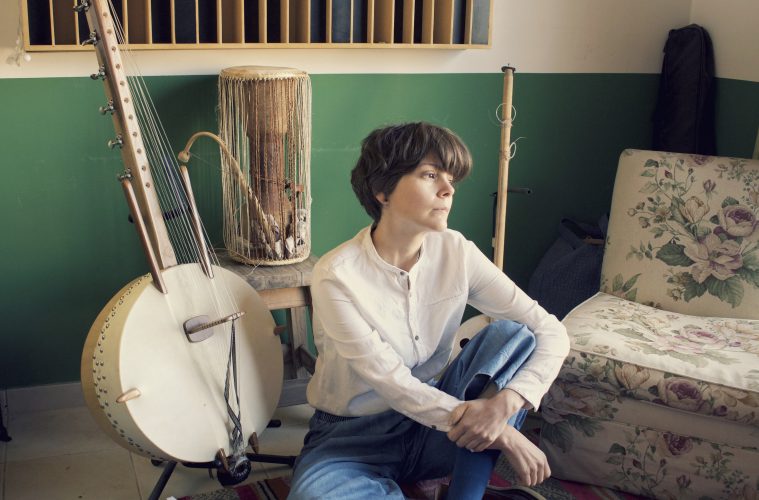 Milagros Majó is one of those artists whose albums feel less like “collections of songs” and more like a painstakingly crafted experience, displaying an almost narrative arc through its sequencing, a use of recurring motifs, and an almost cinematic approach to arrangement and sound design.

She first entered our purview via her song “En Los Bósques de Álamos Plateados,” which we highlighted as one of our favorite new releases last year. When the accompanying album Füryü was released last month, we were delighted to hear that it very much lives up to the standard set by that initial release. And, as part of that batch of albums that were born during quarantine, we found that it resonated with us in unexpected ways.

We spoke to Milagros about the creation of Füryü, the themes it explores, and the influences that run through it.

Tell me about the creation of this album. When did Füryü’s life begin?

I started working on it at the end of 2019, in December. I already wanted to make an album but I did not have the family group of songs. I tend to make different songs that belong to different families, and I found which family I was going to work with. I wrote two songs first, and went into the studio with the producer and started recording. When we already had the foundations for those first two songs, we started working on the rest, and then the pandemic came. So that was like a situation where our usual process got interrupted. During the pandemic, we continued working at home, and it was not until August that we were able to go back to the studio and summon the different musicians. This is how we managed to finish it throughout the year. Then we mixed it throughout January and February, and in March we mastered it.

When the pandemic started, were the songs already written?

No. Maybe there were some that we did not include, and others that were divided. The album has 8 songs that I see as side A and side B, 4 and 4. The first song on side A is the same song as number 5. It is the same theme but taken from another place, with the same meaning. And that’s the meaning of the album’s name. The last song is a piece of the third song too. I wanted to generate a concept, with a beginning and ending. The music goes through different stages, sensations, but the lyrics remain on the same stage. It’s all pointing towards the concept that is the name of the album.

And what is that concept?

Füryü is a Japanese concept that consists of two words: Fu, meaning wind, and ryu refers to transience. And this concept in Japanese culture says that man must flow in nature like the wind does. It invites human beings to take nature as their companion. In these songs I try to create a linear link, 1 to 1, with nature. It is the wind that sings a melody, it is the leaves that dance with the moonlight, always humanizing nature.

That is a recurring theme in your work. In your previous album there are many references to nature, to the elements.

Totally. “En los Bosques de Álamos Plateados” is inspired by a place where I spent most of my summers. A field that my grandparents owned near Mar del Plata, full of forests. I spent my summers there, from December to March, as a child. And I had many experiences there. I fed those childhood experiences into the songs.

Did you approach the creation of these songs differently compared to the previous album?

It was a little different. With the two albums that I’ve made, the process always involves thinking about production, then creating a demo, and then the musicians come and execute what had already been thought out. That’s always how it worked, but with this album the process was even more planned because of the situation of being locked up and not going to the studio or going anywhere. It was a more internal composition.

Is there an album, song, or artist that transports you to a specific place and time in your life?

There are many. I think of the houses where I lived and they refer me to different types of music. For example, when I lived in Colegiales 5 years ago, I have a lot of memories of Violeta Parra and Leda Valladares. Their music was very present that year. I listen to that music and I’m transported to that space. And when I lived in provincia and drove around a lot, there was a Beach House record I used to listen to constantly.

What have you been consuming musically in the last year?

While I was making the album, I was listening to Simón Diaz a lot. I make a lot of playlists and listen to a lot of stuff  I find on Spotify, which includes a lot of North African music, like Tinariwen.

I hear a bit of influence from that kind of music on the record.

Yes, there is a lot of African influence in my music. What led me to make music was African music. I started with a percussion workshop, and from there I got to know many instruments like the ngoni. Then I traveled there and spent 3 months learning to play the ngoni. There are many like Toumani Diabate or Ali Farka Touré, those who play the lengoni or the kora, I listen to it constantly. I also listened quite a bit to an mbiras album, another African instrument. I was in Ghana and Burkina Faso, the mbira is from Zimbabwe, but I like that this music is like a repeated mantra. I’ve been trying to bring that to this record as well. On the first song on the album I play the mbira.

Is it hard to learn?

Not really. It’s a little strange because the tuning doesn’t quite line up with the rest of the instruments. The way the keys are laid out is very different, but once you’ve familiarized yourself with it and stop trying to approach it logically it’s a lot easier.

What instrument do you use the most to compose?

I hear it. There is also a lot of influence from Latin American folklore in your songs.

You just reminded me that I listened a lot to this album of Venezuelan music. It features a harp, the cuatro, and maracas. Those three instruments are used to create this kind of music. I was in San Telmo, I came across a record of these songs that I loved, and from there I started to make some of these songs.

The lyrics are very central to your work. Do they come before the music?

In general, the music comes first. Playing with the instrument or looking for a new position, I begin to find a way and begin to make a new melody. I begin to sing that melody, only with the consonants perhaps, and from there some words begin to emerge. From there I already know where it is going to go. And that’s when I start to think about the lyrics, I start to read things, I look for information, and from there I put it together.

I say this because there is a very poetic character to your lyrics.

I like poetry, but I don’t usually read it. What I read the most were poems by Rumi or that kind of more abstract thing, that says something but also says many things. I never delved much in the world of poetry. But I really like it. I also like to speak metaphorically because it is like a way of approaching a subject that may mean something but I speak it from such a wide place that each one takes from it whatever resonates with them.

What are you most looking forward to doing when things get back to “normal”?

Traveling. I feel like it nurtures me a lot. Obviously, the current situation makes mobilization complicated. And then also hanging out with musician friends, not to play a show, but just to jam in a house with many instruments. Playing music all night.

Have you thought about performing these songs live?

I haven’t thought about it that much, because it feels so far away. I want to produce some live videos, not streaming. I am thinking of organizing rehearsals with the musicians to make some videos. But yes, of course I want to share the songs with other people.