The bus flies down Av. Rivadavia and drops us off on a dark corner somewhere between Primera Junta and Puan. It’s about 10:30pm on a Saturday night and the fog rests heavily over Caballito. We zigzag our way through the neighborhood: across the train tracks, past the lively indoor football pitches at the Club Ferro Carril and up busy Avellaneda before rounding the corner onto Espinosa. From the opposite side of the block, a bright string of chunky lights summon us over to Menenga, a young take on the familial local cantina.

A small circle of friends and family huddle around a tufted leather couch and greet everyone that enters in unison. Owner and head chef Nicolas Gonzalez scurries up and down the thin kitchen. He checks in on a steaming sauce pot before gently dunking a bulb of garlic in, skin and stalk intact. Bright yellow hamburger rolls are haphazardly stacked in an oblong cooking tray. He grabs a handful of tightly knit empanadas and tosses them in the deep fryer that screams and sizzles.

Gonzalez hails from a long line of cooks. His great-grandfather cooked for the President of France. His grandmother landed on the Argentine coast and opened hotels where she worked in the kitchen. Gonzalez learned to cook from his grandfather, a partisano from the Northern Italian beach town of Lavagna. His grandfather’s nickname, Menenga, is now written on the front door in blue and white letters.

His childhood is reflected in his gravitation towards familiar porteño fare remixed with splashes of street food. The hominess of the food is echoed with the comfy atmosphere that only exists in small enclaves where the owner also happens to be the chef, dishwasher, waiter and accountant. 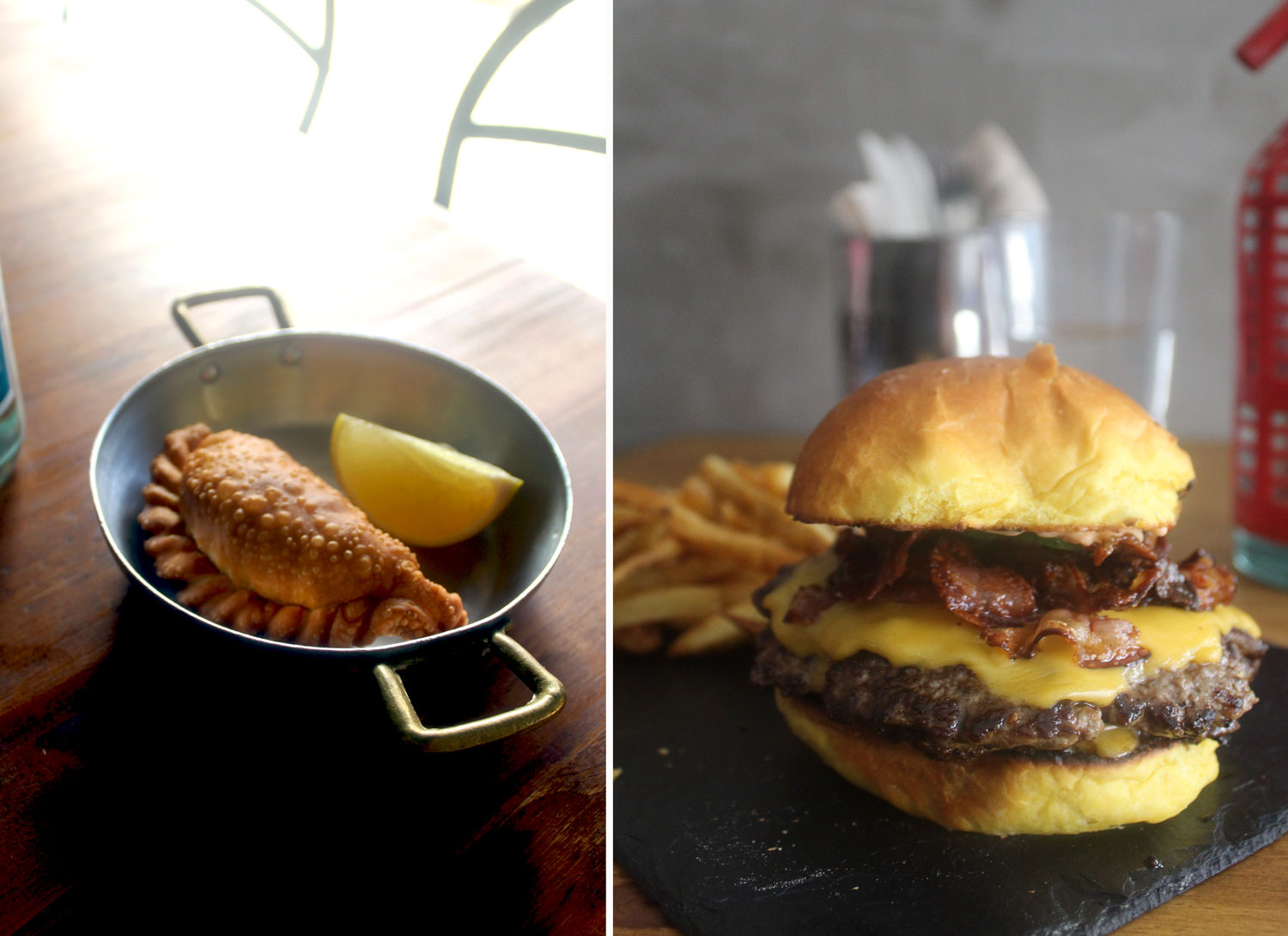 Everyone in the room is eating hamburgers. Before Menenga there was Arengreen, a weekend puerta cerrada run from his home around the corner, that specialized in classic smash burgers. Two survived the new menu and both lay heavily on the side of tradition. Patties are a simple mix of roast beef and fat that are smashed thin and served in twos. The burger, Gonzalez recommended the Doble Bacon, immediately transported me to the diners and roadside restaurants I grew up on. A dense marbled fat is that first burst that hits. Buttery cheddar cheese oozes over with a satisfying lacto-fat flavor. It hangs on tight to the tongue as bursts of savory-sweet pickles and a generous stack of salty bacon flutter in and out. French fries are cut thin and fried to a lovely, airy crisp. Fluffy tangerine orange buns made of cabocha squash add an unexpected honey note. It is the kind of simple but second-natured execution that often only comes from a fry cook that’s been manning the plancha for decades.

Although the burgers are the operation’s bread and butter, it is the rest of the menu that shows off the restaurants courage amongst a sea of parrillas and pizza shops. Bubbly fried empanadas are stuffed with ojo de bife. The beef generously balances between the acidity of tomato paste and generous squirts of lemon, fatty squares of bacon and a touch of honey that happily confuses the tongue. 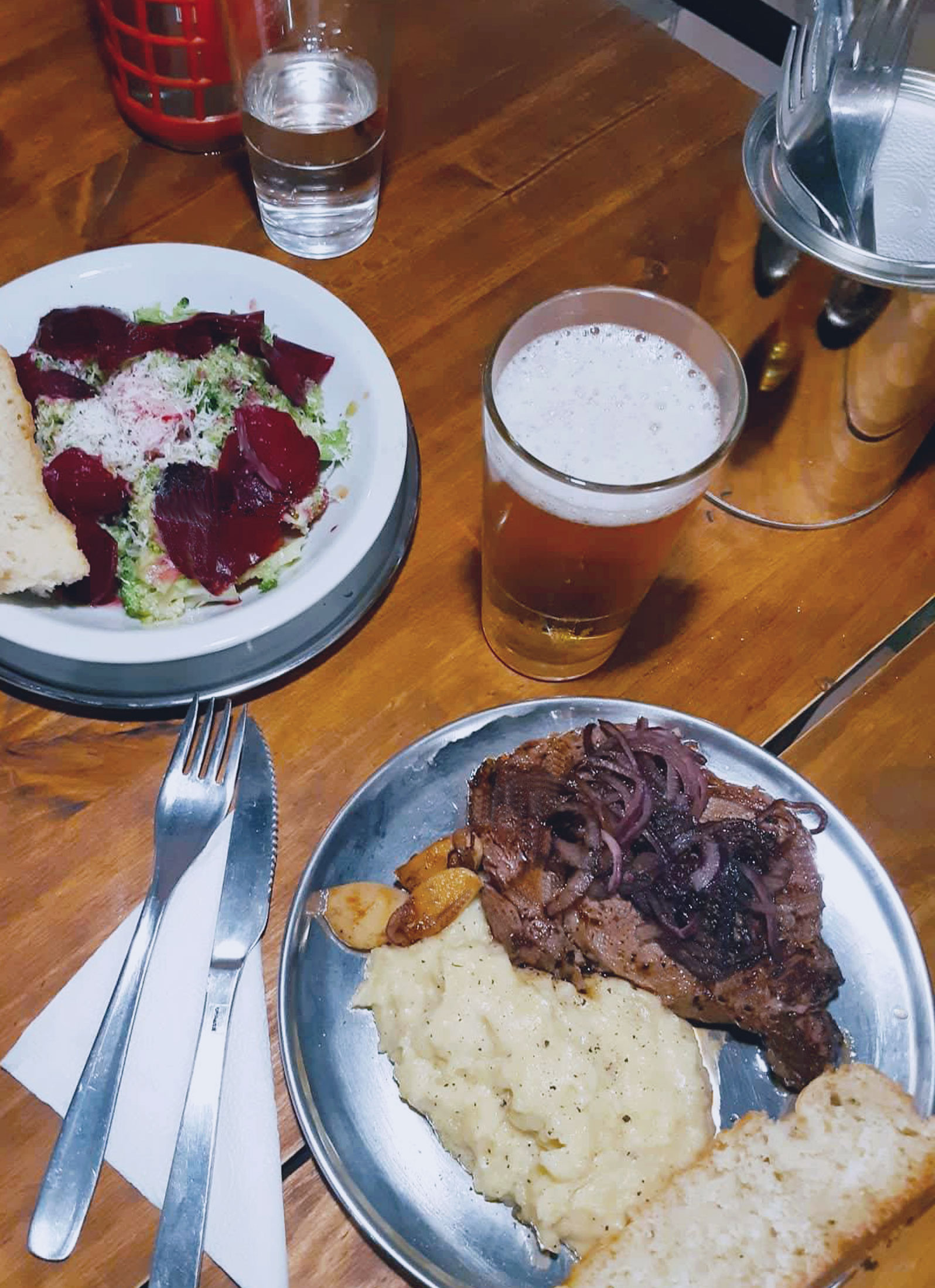 Rib eye is also served al plato. It is my favorite dish on the menu. Cooked to a tender medium-rare, it is paired alongside butter and garlic-laced mashed potatoes, brave roasted garlic and soft red onion that adds a tinge of tang. Gooey mollejas are grilled until a fat grit forms on the edges. It plays nicely with sweet corn kernels, a creamy white sauce and stacks of smoky bacon. It is a gluttonous dream. The house salad shouldn’t be underestimated. The seasonal salad has a soft spot for root vegetables like broccoli, radish and beets served with slightly salty cheese, a creamy vinaigrette and fresh bread. It’s the right pair for just about everything.

Open: Tuesday through Sunday 7pm to 11pm. Open for lunch from 12:30pm to 3:30pm Saturdays and Sundays