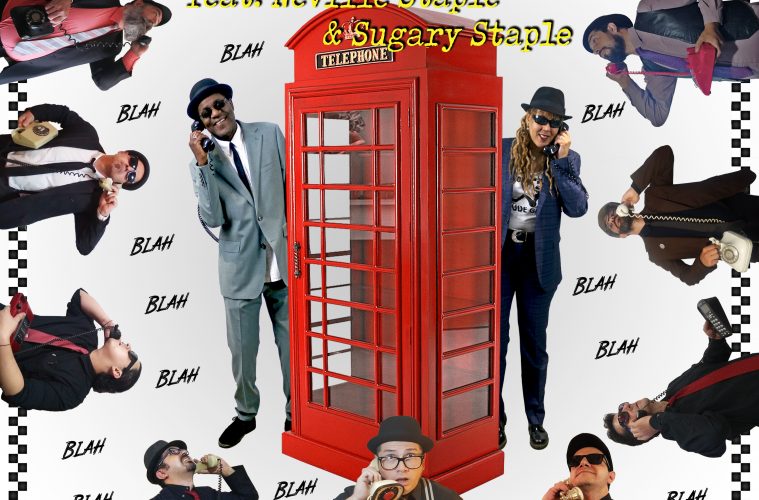 It’s not often that people get to meet their idols, nor have the chance to collaborate with them, but what seemed like an impossible task to many, became the mission of local Ska/Two-tone outfit ‘Kato Ska’ with the assistance of local record label Argie Pop Records managed by Charlie Russell.

The ska movement in Argentina has always been quietly simmering away with not much connecting the overarching movement in the rest of the world and especially not the birthplace of Two-tone in Coventry, England.

Kato Ska started off as a duo in the Villa Ballester neighborhood , Buenos Aires, during 2014. Soon after they filled out their personnel with their nine member crew featuring: Maximiliano “Kato” Delmás on guitar and voice, Rubén “Topo” Domínguez on guitar and backing vocals, Leandro “Lea” Bertoni on bass, Nahuel “Palmer” Sosa on tenor sax,  Lucas “Bambino” Canepa on alto sax, Fabián “Fafa” Morresi on trombone, Gustado “Dino” Tarditti on trumpet, and Alexis “Pity” Bonafert on drums.

During 2020 Kato Ska had been working away on their latest album while the quarantine was in full swing, despite the usual difficulties the band decided to make a dream a reality by bridging the gap between the pioneers and the innovators by reaching out to Sugary and Neville Staple from ‘Specials’ fame, the most important figures in the Two-tone scene globally.

The result became the advanced first single titled ‘Blah Blah’  from the yet to be released album with an accompanying music video featuring the members of Kato Ska and obviously the power couple of Sugary and Neville.

I spoke with Charlie of Argie Pop Records about this exciting release and how it all eventually came together.

So Charlie it shocked me being someone who is still relatively new to the Argie scene that the Ska movement here is growing and a band like ‘Kato Ska’ existed. Because I feel like the scene can sometimes be quite separated which makes it difficult to find great bands like this.

Well during the 80’s there was a lot of money to be made through music in Argentina but only for a lucky few but with the arrival of the internet and the disappearance of this power from the major labels that became quite mothballed and some of these bands began breaking down those barriers from fanatically chasing rock as a path. When I came back in 2011 from having lived in the UK, I once again came across these neighborhood rock bands who had great support from audiences but weren’t necessarily doing anything particularly interesting…

Reggae and Two-tone has been knocking about since the late 80’s in Argentina and when those bands arrived there was an explosion and when that first wave was finally established, which more closely mimics the English punk movement over that of the Jamaican sound, especially in relation into the inclusiveness of the UK scene, we saw some interesting developments and even more so nowadays but it’s all a slow build.

Also with things like the compilation releases which we’ve been doing, I think the previous difficulties are slowing because communities and networks which wouldn’t necessarily be connected in any other way are now sharing not only their art but their audiences. Like a punk band working with a pop artist or collaborating with a rapper, and it all helps especially when you’re dealing with unfair Spotify algorithms.

Speaking of networks and communities, how is it that you managed to get your reach all the way over to old sunny Coventry of all places?

Well for a start the sound itself is much closer to ours, especially being far more punky, and as I mentioned before how inclusion is such a big part of it. Weirdly I had never played in a Ska band until I came back from London because I was too busy playing in Indie bands but somehow we managed to build this impossible bridge between Coventry, Buenos Aires, and San Martin with Kato Ska.

Maxi and the rest of the guys did a release with us a wee while back and we’re mates. We were having this discussion before the pandemic of what would be your wildest dream… I think it was February last year..and Maxi just said I’d love to get a song and collaborate with Neville Staple… and I said ‘ Well, I can do that.’

During my time in the UK it just so happened to be the 30 year anniversary of the Two-tone movement in 2009 and I was there when ‘The Specials’ reformed for a live tour and I got in touch with the guys who were running the fan club and I ended up getting chummy with a couple of them. Fast forward to the pandemic and I reached out to one of the guys that I knew and they let me know that Christine Staple [Sugary] is the big player in selecting what they do.

So I reached out via email to see if they were game to do something and they said ‘Yeah send us a song..’. I mentioned this to Maxi and he almost fell on the floor crying saying and saying “What should I do?”. He had an idea of a song to send and he got that out in a couple of days and they loved it and said “Let’s do it!”

So I was the middleman in all that exchange, they understood the scene here and knew that people in Latin America appreciated the roots of the scene and to them it made sense to get involved with a band to collaborate even if they weren’t as established.

How did you guys handle the process of recording and releasing the single?

Well when it was the first wave in the UK it made it difficult for Neville and Christine to get into the studio to record and then the hardest part was the first wave here so Kato [Ska] couldn’t record their parts, everything was roughly finished by the start of this year and we put it out at the end of April and we collaborated even further by putting out a video and also the artwork for the album.

Although I was stressed as the middle man it was so awesome to support a local band as a local indie label and get them further exposure, support, and listenership from what would be a pretty normal expectation from a UK based band with a UK label, even though we have the same high production value and standard.

It’s not just a cassette tape sounding rehearsal, it was a properly recorded song and it was an absolute treat.

Do you think without the accessibility of equipment for recording eg: DAW, high speed internet etc. this would’ve been possible?

Yes, but with this track we didn’t set this out to be a ‘quarantine’ single, we demoed with whatever we had available to show Christine and Neville with the initial idea but we cut no corners in relation to the process of recording the full single.

So it’s a yes and no answer because we gave no compromise in the way of quality with accessibility, we didn’t want to follow the same suit as everyone else recording the stereotypical lockdown track and video. Also it’s worth noting that we could’ve done this so much quicker if we didn’t have the pandemic though.

Do you think this opens the opportunity for other bands on your label and for Kato Ska to collaborate with other big artists abroad?

We were lucky the music made it happen, if the quality is there for the other various performers I work with I do think that anything is possible. It was unexpected but it definitely opens the possibility for other bands to be able to achieve similar goals.

How would you describe the sound of Kato Ska for someone hasn’t heard them?

They represent their neighbourhood via their sound while simultaneously embodying the original sounds of Two-tone with it’s punk/ska sound but with the authenticity of Maxi reflecting the sounds of his own background.

You can check out more of Kato Ska here.