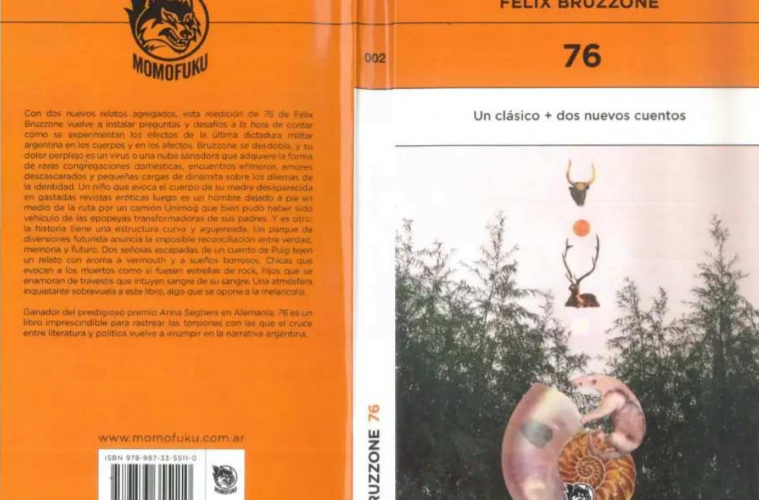 A Different Way to Tell Our History: 76 by Félix Bruzzone

I could start off by explaining where Félix Bruzzone comes from and going through a thorough review of his biography, everything he went through, what influenced his writing. To me, it’s obvious that the writer’s social position and experience compels him to write what he writes. I think this would detract from my analysis of 76. Bruzzone, as the title of his book implies, is a son of the disappeared during Argentina’s military dictatorship. That’s the place he writes from, but not the place where he stays; instead, he continues to build in the present. It is a literature of the self that might not have been. I do not care whether the stories told in the book actually happened; it accurately conveys the emotions lived by the narrator and protagonist of its stories.

The story I’ll mostly focus on is Otras Fotos de Mamá, because the protagonist’s story is the one that impacted me the most. He begins by looking for his mother from the past through a chat with Roberto, an ex-boyfriend of hers from the time of their youth. Then he seems to “forget” about his original purpose and becomes more interested in finding his mother in the present in Cecilia, Roberto’s current partner. He accompanies her through the motherly activities that occur throughout the story, like shopping for booties for her son. When the protagonist finally meets a mother is when you begin to understand the reality of a son of the disappeared.

I am convinced I was able to connect so much to this piece due to having lost my mother. But perhaps those who are lucky enough to still have them can start to understand what happens to those of us who have lost them. In my personal experience, I remember being approached by adults to offer condolences and to tell me that they understood, because they also lost theirs. And while theirs had died at 80 or 90 years old, that didn’t matter. They had lived it the same as me, they had lost the connection with nothingness itself. Because we are nothing and we transform into something after approximately nine months in the womb. This loss of ties with the unknown is experienced by almost all of us at some point in our lives. It is part of the cycle. The best books I read about this were Mourning Diary by Roland Barthes and También Esto Pasará by Milena Busquets.

From the notes I made on Roland’s mourning diary, I decided to try and write my own. This led to the realization that my mother continued to influence my life from another place.

Let’s leave that digression for another moment and return to the work I’m recommending. 76 is a great collection of stories by a young author (or at least it was when he wrote it). Sometimes it is good to read less polished literature. Like the first pure and dirty demo of that rock band that will later be produced by the best sound engineer in London or New York. There is something that Tamara Kamenszain defined as “offensive testimony” in writing. The importance of these new works, in my opinion, allows us to connect much more and better with the history of our country. As I told you when I visited “la casa de los conejos” in La Plata, the bullets in the ruined walls allowed me to feel the horrors of the dictatorship. I felt the same about Félix Bruzzone’s stories.

76 is more than a piece of writing about a son of the disappeared; these stories transcend the dictatorship (without minimizing the acts of barbarism commited by the military during the dictatorship). Throughout the story, we see how the protagonist struggles with finding his own identity, and that of his mother who was murdered by the regime. But the protagonist shows us that he has overcome the worst years and can carry on living. The digressions he goes through are that of a forgetful narrator or a distracted historian, and they are the ones that most make us feel the question of his past and his present. Its main priority is to convey the emotion.

When this conflict is overcome, the work loses its drive for vindication and leaves the territory of militancy, memory, and testimony to go on to tell trivial stories that can happen to any of us. This “post-memory” step allows us to connect much more deeply with the text. As in the story Otras Fotos de Mamá, the protagonist prefers to talk with Cecilia about the trivial things that happen to him, about coffee, or about the son who has to play rugby in the rain and mud. There the memory of the past is rewritten in the present; his mother does not exist anymore, but is being rewritten in the past, while the mother of the past (the one in the photos) stops mattering so much, which is why he forgets to tell her to ask Roberto for the photos.

This sense of mundanity is a constant in the stories of 76; the weather is discussed all the time (perhaps the most trivial talk on the planet). In El Orden de Todas las Cosas, during the peak of the climax when he learns that Claudia (perhaps the only and last connection to her mother) is ill, the story shows us a scene from a supermarket and the purchase of a sausage too thick to be able to enjoy it on a picnic. These inclusions are not accidental, Félix Bruzzone knows that he cannot escape from what he is and that the stories will leave us with everything we have to know about his past and present. To this, we can perhaps refer to the concept of active amnesia. That distracted interest destroys you as a reader, that affective truth where we can see all the feelings of the character, but without the need to resort to objective truth and testimony. We don’t care if the weather had been sunny or it had been a rainy day, what matters is how Grandma feels. This is going to tell us much more about her than the weather.

To conclude I want to highlight the benefits of this new literature and narrative in the understanding of our past. I’ll leave the concept of objective truth, whether you believe it exists or not, to history books. In a literary work, I will always prefer this type of writing where the affective truth is prioritized, where the protagonist shows himself to us in a fragmentary way, with his forgetfulness and with his language. In that construction, from a distracted narrator, we can connect with him and feel everything that happens to him. And those of us who did not live the horror of the dictatorship can also begin to reconstruct the present from these stories, empathizing with the children and grandchildren of the disappeared, or perhaps with those who lost our mothers.