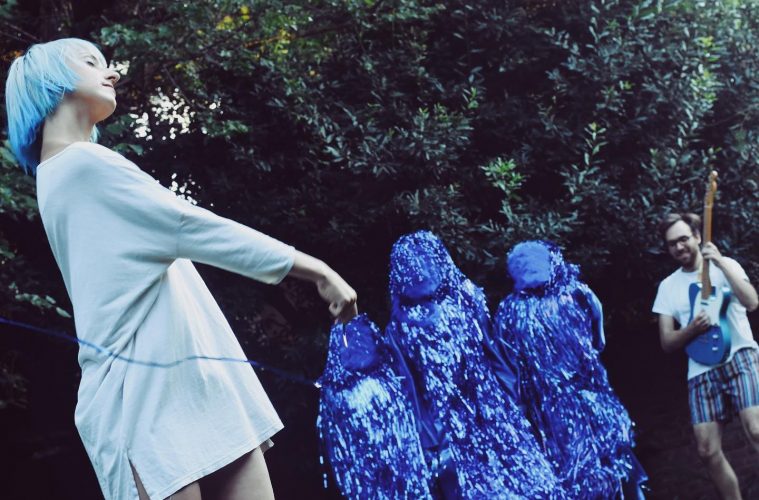 It took only just a few seconds of “Sin Miradas”’s first verse for me to find myself admiring the textural sound of soft bit-crushed keyboards and Candela Cibrián’s haunting vocals in her latest single under the monicker Fenna Frei. After a rowdy and potently atmospheric debut album, 2017’s Fuente Nocturna, Fenna Frei shows us that musical prowess is often shown in how the seemingly minute can be a prism for grandeur.

While most of her previous work was quite eclectic, her latest single projects a subtle and pillowy version of Fenna Frei, the rumbling piano and lush guitar chords accentuate the emotionally charged sections, where soundscape takes over completely and a wave of stimuli washes over every musical movement. One could say that Fenna Frei is an audiophile sharpshooter.

In light of Fenna Frei’s latest activity and promising sound, we were lucky enough to have a chat over the weekend where she shared with me some of her aspirations, goals, and the creative emergency of quarantine.

FF: I live it as a compliment. Producing third-party music, unlike your own, gives you the possibility to start from an idea that you would never have imagined or traced by yourself. A much fresher and genuine starting point. I always liked making music with others rather than my own, for example; I feel it gives me better results and even more confidence in myself. Maybe because I work with music and being so versatile it’s good for me if I can have someone to team up with. However, as I work mainly with voicework production, I take my taste into account when choosing what to produce and so far, I have not produced artists in whom I don’t believe in.

What challenges did confinement throw at you in creative terms?

FF: It was a difficult year to continue to believe that it’s worth investing tons of effort in an idea of your own with so much crumbling around. All my structures trembled. I spent a year not knowing what my identity was (like many) and trying to figure out the new one. I recognized, more than ever, the powers that produce and constitute us (the “don’t forget about the algorithm” spiel). I tried to identify them and get away from them as much as I could. I did an exhaustive cleansing regeneration work in which Fenna Frei was on stand-by to give rise to a year of thought and transformation; it was impossible to create in the midst of such a crisis. Only this year (following Foucaultian wisdom) did I understand that these detachments of identities were necessary to evolve, and I was encouraged to face the blank sheet again.

Tell us a little about your latest single, “Sin Miradas”. The video looks pretty surreal. How did you come to decide on that aesthetic for the music video?

FF: I knew I wanted something simple, because the song is simple and because the message is very simple, direct; “to the bone”. That’s why I first thought of a well-rehearsed singles-shot video from start to finish. I also wanted it to be unsettling, like dreams, so I imagined the whole sequence doing the exercise of dreaming.”The piano would not exist for the viewer,” I would just be moving my hands as if it were my imaginary realm.” Something in the garden would also be out of place, like some disturbing little monsters”, hence the blue creatures that represent the new audience, the one that is there but since you can not see it, you do not know if they look at you, support you or judge you.

In quarantine the night became very disturbing; no matter how good the day had been, I knew that the night gave me back all the horribleness of this moment we are going through as a collective, and that generated peaks of anguish for me. When it came time for the “night” in the song I realized it had to be a parenthesis; I imagined opening that shack and finding many lights twinkling, that mixture of magic and mystery that seduces you and shakes you –contrast. For the ending I had to think of something totally bizarre and unexpected to break the solemnity of the night and the song’s depth, something that gave off that mixture of sorrow and laughter; so we ended up giving a concert in pajamas with a wooden spoon and Slash-type guitars. As if it all had been in a dream, I guess, haha. None of it would have been possible without the art direction of Maxi Bottoli, who contributed his sensitivity and talent to this sum of ideas

Your music seems to take inspiration from so many places. What bands are you inspired by and which do you feel more people should listen to nowadays?

FF: Any band/artist that sounds authentic and has their personal imprint I think is worth it because it brings something new that, in a context of so much cloned music, is worth gold.  I personally engage with artists who take unexplored paths (risks) in their songs/productions or who manage to thrill with the bare essentials. The poetic summons me, always. Also, sarcasm and, musically, jazz and impressionism are among my weaknesses. I can’t list any artists in particular because there would be too many and I don’t want to leave anyone out! Haha!

What other projects in addition to Fenna Frei do you see on the horizon? Is this new single part of a possible new EP or album in the future? What’s on your 2021 agenda?

FF: “Sin Miradas” will be part of the next album (2022) which already has 4-5 demo-ed songs. This year 2 more singles will come out and maybe we will get to release a 360° video of “Fuente” from the album Exilios that is already in production. And once all this is over… travel!