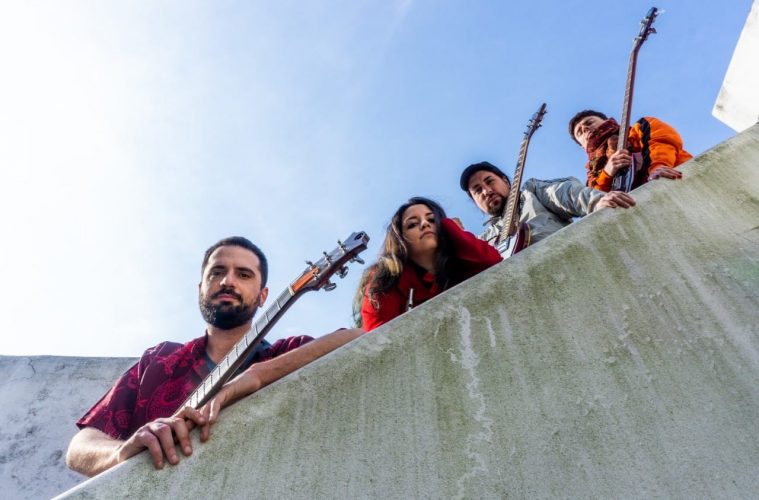 Marra y Les Practicantes is the brainchild of La Plata based singer-songwriter Emilio Marraccini. After dabbling with solo ventures for many years it wasn’t until 2019 that Marraccini expanded the personnel to include Matias Chefene (bass and vocals), Dario Javier Pita (guitar and samples) and Mora Mendez (drums, flute & vocals) but with injuries and the unavoidable effects of a global quarantine the band didn’t have the easiest beginnings to build an audience, nor play live frequently.

Despite all of this the band has continued to work on producing new tracks and videos to give us a taste of what they’ve got cooking while we lay waiting for live shows to return. I first caught the music of Marra y Les Practicantes back in October of last year and since then have been paying close attention to this lo-fi Indie rock group.

After reaching out Marraccini and I spoke about how Chinese culture has played a part in the imagery and ideas behind M&LP and we explore their latest release ‘Haikus de Guerra’.

As the main writing force behind Marra y Les Practicantes was it difficult switching from playing and writing as a solo artist to then putting together a fully fledged band?

In some ways, yes. That said, things change when they start opening up. We created a collaborative project both on the musical side and audiovisual side, and it enabled us to do things I never would have imagined.

If it wasn’t for the band (Mora, Chefe, and Seba) or for Mati, our sound technician, or “El Goma” who makes our videos, I’d still be playing the songs by myself on my couch at home.

Now we’re working on Mora’s first solo project, on which I’m playing bass and producing along with Mati. I’m the captain of the ship when we rehearse as Marra y Les Practicantes, but we’re all aboard the same vessel and we switch roles based on the project we’re tackling..

What is it about Chinese culture that influenced you so greatly and has the Chinese community in Argentina helped develop your love of the culture even more?

It started many years ago, when a music teacher friend of mine exposed me to the I Ching (an ancient Chinese book of divination) for the first time. It was an isolated event that was recontextualized later when I decided to get my own I Ching, and it helped me go through a big life transition.

During this transition I began practicing Tai Chi, and it evolved from there. I’d love to have more contact with the Chinese community. I’d started learning the language during the first wave of the pandemic but classes were discontinued. I hope to one day be able to visit Asia and especially China.

I think this is all reflected in the music video for “El Camino Del Tigre,” which we just released. It features Lucila Angelinetti, an incredible martial artist, whose Wushu is as good as you’ll find anywhere.

Do you think there are any parallels between the two cultures?

I don’t think so. I don’t really know much about modern Chinese culture, anyway. I’ve always been interested in antiquity, and it’s hard to find a parallel during those 6 thousand years of history.

Argentine culture is much more recent, I’m not sure what was happening here at that time. And then there’s the Latinamerican / European clash. But there’s a Chinese phrase that I really like, it goes “shared joy is double the joy.” If I manage to make it there I’ll feel better equipped to answer this question!

Although 2020 didn’t offer the best of luck in terms of properly forming the band do you think this helped with the process of producing your soon-to-be-released album?

We are a band that was born during the pandemic. Our first EP El Camino del Tigre was released before we were even able to play live, just like the “Pandemic Edition” and the new album we recorded in December, which will probably be released this year.

So yeah, we recorded 2 EPs and an album without having played live. And to this day, we’ve only been able to play live three times, between February and April of 2021, before restrictions were put back in place.

I’m curious as to what led you to releasing two opposing versions of your 2020 release ‘Uruguay’?, the soft acoustic vocal version and it’s later beat and flute laden remix.

At first, during the first wave of Covid, we tried to rehearse long-distance. The lag made it impossible, so I recorded some guitar and vocal tracks and sent it to the group so that each person could record their instrument and learn the songs.

Mora really loved “Uruguay,” and she plays many instruments, so one night she just started layering in flutes and synthesizers on my guitar. We listened to it and loved it. We tried to bring it to a more lo-fi aesthetic. I was listening to a lot of Fanso at the time. I asked my cousin Vasso to put together some chill beats, and the “Uruguay” remix was born out of that.

The idea was to revisit the entire EP, but the original versions of “Julia” and “El Camino del Tigre” were very solid and we couldn’t come up with a way to improve them. On “Baishi” we looked for a more traditional Chinese folk sound with the instruments we had available, modifying the flutes so they sounded like a diza (Chinese transverse flute) or playing a banjo like a pipa, which is a traditional Chinese instrument.

Is Uruguay your paradise location, and what would be the equivalent place of peace in Argentina?

More than the place, it’s the people you’re with. For many Argentines, Uruguay is like this promise-land that’s very similar to Argentina but more orderly and with better legislation.

But I made that song for a girl I fell in love with during a trip. It came out of Playa Fernando in Colonia, my favorite beach in Uruguay. As far as Argentina, I love the south. If I have to pick a place I’d go with Tierra del Fuego, though I’d love to be able to visit Anartica.

Your latest release ‘Haikus de Guerra’ is off your soon to be released new album, what can you tell me about this particular song and how does it fit into the grander scheme of the rest of the album?

It’s a different song because it came out of something that I didn’t write, It uses haikus by Martin Raninquen, who was a soldier during the Malvinas war. I started working on it when I went to Rio Grande, Tierra Del Fuego. Life is different in the south.

As far as how it relates to the new album, I think it’s going for a more raw and visceral sound. We wanted to step away from the layered home-studio sound we’d been working with during quarantine, looking for a more full-band sound.

We went to an old pulpería (a gaucho-era store) and we spent a whole week recording and filming. We recorded all the instruments at once, without a metronome, looking for a more organic sound.

Do you think that the band, despite many appearing only as contributors, has more of an influence on future releases as permanent fixtures of the group?

I don’t really know, because we’ve already recorded all the songs I had written. We’ll have to wait for the new songs to come, and for that we’ll have to go through new experiences. For now, we’re working on the album-film, which will keep us busy for at least the rest of 2021.

Ideally where do you see the band in the next few years?

I have no clue. I don’t even know how long the band will last. What I would like is to be able to play several places, and that the next album we make isn’t entirely composed of traditional rock instrumentation. I’d love to get my hands on some Chinese instruments and experiment. Who knows what might happen in a few years.