Editor’s note: This review was originally published before the onset of the pandemic. We apologize for the nostalgia in advance.

It is sometime around 11pm, usually in the middle of the week, that Don Ignacio hits its sweet spot. While the traffic outside barrels down Avenida Rivadavia, inside the dinner rush has finally quieted. Its the faithful that remain behind, often times seated alone, mopping up the last of their Don Valentin or slowly nibbling away at a vigilante while chatting with Norberto, the owner, or his dutiful assistant Walter, a barrel-chested man whose size mimics the enormous milanesas that come out of this kitchen.

The regulars often appear to be pre-gaming for a rock show; long hair pulled back in a pony tail and band tees worn like armor. They fuse together with an impromptu wallpaper of concert bills and album covers that blanket the entire room. The volume on the tv goes up. Tonight, the Lynch-esque concert doc A Black and White Night plays and Roy Orbison glides across the screen before his voice vibrates Leahhh.

The protocol doesn’t stop at the decidedly rock n’ roll atmosphere but the way you order, too. At Don Ignacio you eat milanesa. It is a dish laced heavily with nostalgia—a warm hug after a long day that when done just right makes you melt into your plate. And by no means is it a rarity in Buenos Aires—you are never too far away from a milanesa. But at this Almagro dive they take on a singular personality; familiar but sultry like the soul and blues that play on loop.

There are exactly thirty-seven milanesas to choose from. Forty-two if you count the chicken ‘especiales’—decidedly un-special and sparsely adorned as if to tell you to stick with the veal. There are a handful of minutas and a parrilla but I have yet to see a single diner stray.

The only exception is the empanada, stuffed with ground beef and fried fresh, that appears on the menu twice as Option 1 and Option 2. The emphasis isn’t disingenous. They are that good: a rich orange broth spills from the seams and is only momentarily interrupted by the slight sour of a green olive. The crispy shell smells of pork fat. The aroma climbs upward with the long grey drags of steam; the house maintains that they fry everything with a garden-variety vegetable oil.

The menu’s bread and butter doesn’t present any truly wild flavor combos (with the exception of a membrillo and cheese). They are always imperfectly shaped and flop off the edges of the oblong metal trays. But this austerity is a falsehood—the excellence is humbly hidden behind-the-scenes. Ease in the back of house dictates that a milanesa be breaded and chilled. Leftovers are frozen or reserved for the following day. Here, they are breaded to order in a modest mix of eggs laced with salt, garlic and parsley and rough bread crumbs. The small batch technique makes for more tender steaks and crispy breading that turns into an deep copper brown. 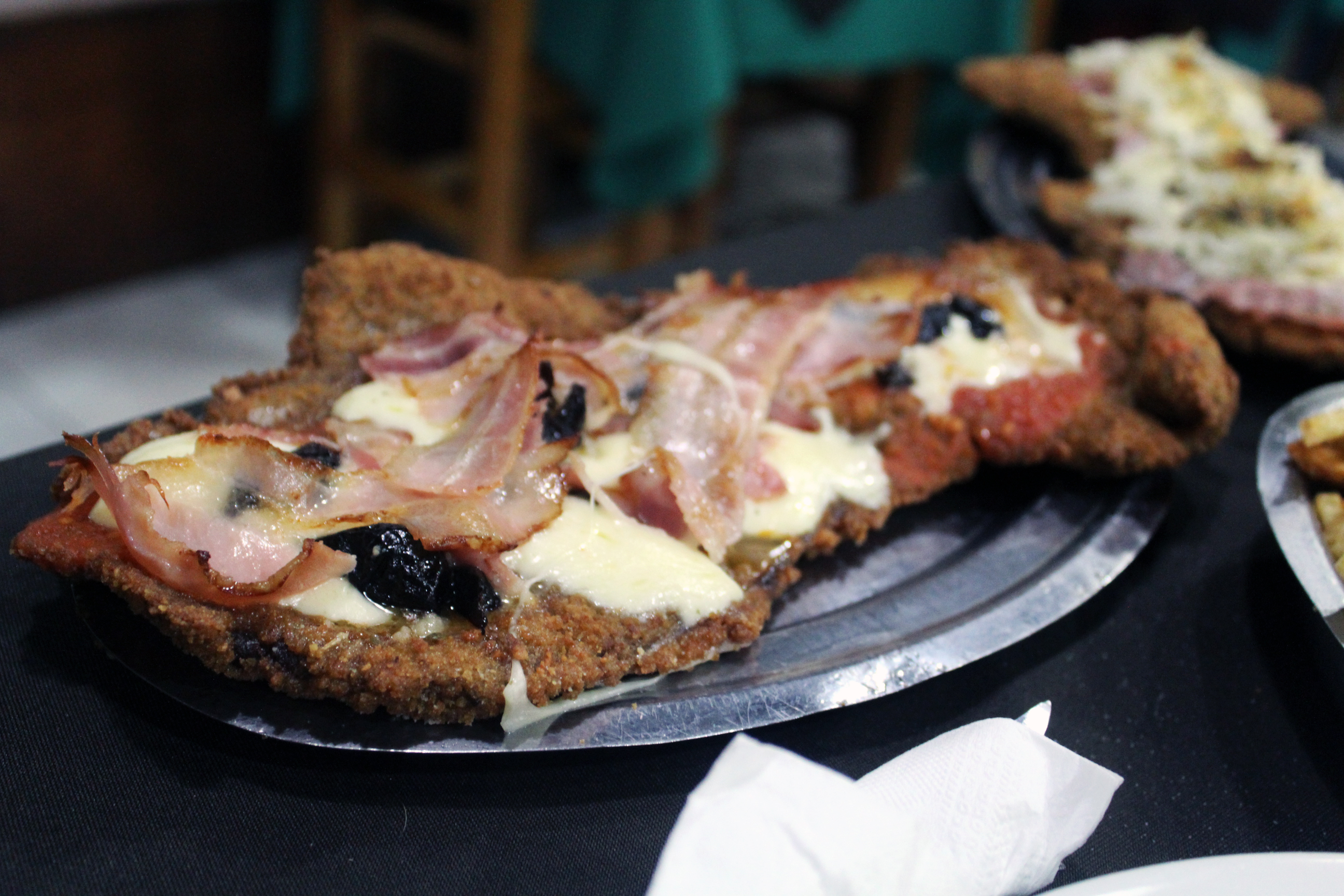 The frequently recommended fugazzeta is topped with slices of supermarket ham, creamy white cheese and white onions that char under the intense heat of the oven. There is a distinct pleasure to the sound of oven-charred onions that squeak and grind with each chomp. The oven is also able to do wonders for basic deli ham crisping the edges and swapping the offensive slime for a more dignified salty finish. The eponymous house special is the same dish with the addition of two nebulous fried eggs that blossom out in every direction and crisp around the edges. Order them runny and let the yolks play with the melted muzza.

A bacon and plum decorated cubana was the favorite at the table. Waves of panceta have a distant touch of smoke and imploded half moons of dark purple plum are unscientifically tossed on and offer welcome shots of tang. To pair, mashed potatoes are often bland and lacking homey butter and garlic flavors. French fries are almost always notably good—the kind with a crispy shell that hides a pillowy center. For dessert, skip the motor oil style coffee and march past the flan. Instead, orrder another beer and sing a song or two.