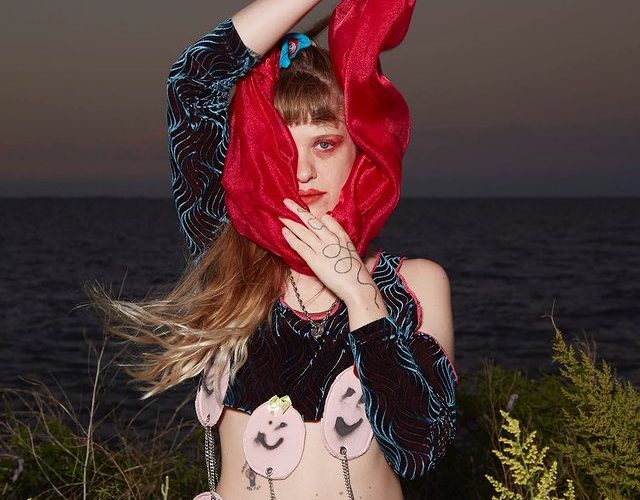 Best known for her booming and rumbling steps on the fertile soil of noise-punk with Lxs Rusxs Hijxs de Putx, La Piba Berreta reached our ears this year thanks to a string of singles released in the form of videos, as part of a whole film. Shortly after, an album titled  Golpe De (M)Suerte dropped unexpectedly; a debut with a palpable urgency that we’ve discussed repeatedly in our Monthly Music Roundups.

As La Piba Berreta’s artistic avenues branch out into a multiplicity of roads, we had the luck of having a chat with her about her debut and new horizons from here on out:

We have been checking out your releases leading up to your debut album and we wanted to know: What is Golpe de (M)suerte about as an integral piece? Do you feel it’s something conceptual or a compilation of sporadic songs? Maybe both?

LPB: It’s a conceptual record. A kind of dark record that talks, mainly, about how I perceive myself. It talks about other mentalities, my desires, my frustrations, my findings. It’s a record that doesn’t have a single love song. Because I don’t believe in that BS anymore.

There’s a lot of Lxs Rusxs in your solo music. How different did you feel the creative process was now that you’ve recorded your solo stuff versus what you did with Lxs Rusxs?

LPB: There isn’t much of Lxs Rusxs in my solo stuff, instead, there’s a lot of me in Lxs Rusxs. I was the main songwriter in the band. Besides, the recording process, in this case, isn’t so much related to the creative side of things but rather possibilities and resources. We recorded Golpe de (M)suerte in 2017 in a makeshift studio in a café’s basement in 3 hours. Later, we added some instruments, but the base of the record (drums, voices and guitar) were recorded in 3 hours. Then, we had to do some magic with mixing and editing. This whole editing took me 4 years. Mainly due to lack of funding and a little bit of detachment from the material, because I was traveling constantly and I couldn’t put in the work I needed to. When the lockdown started last year, I couldn’t travel anymore so I poured my little savings and the enormous amount of time I had on my hands into that.

We know you’re producing some stuff with a friend of the house, Carola Zelaschi, at her new studio. How does the creative process feel like collabing with her?

LPB: We have loads of fun with Carola. I admire her, her professionalism, her clarity when working, her ideas, her imagination; everything. We work together on other projects and it’s always a pleasure. Along with Violeta Garcia (also from Blanco Teta) they are recording a record of Ruina (a duo that I’m in with Nadia Sandorna: ella es Ru y ella es Na, juntas somos Ru y Na=Ruina). With Carola, we are also working on producing Emi Gorza’s poetry book, mixed by Lucy Patané. And of course, we shared lots of shows and fechas playing together. She’s a friend and companion I love a lot.

How was the quarantine for you in creative terms? Did you feel like it opened up some creative avenues for you or was it more complicated?

LPB: All I can think about at the moment is that, as a strategy, I started organizing poetry and writing workshops and that changed my life. It was something I had never done before. And, to be honest, I really enjoy giving classes, sharing writing techniques, and my favorite authors. Above all, I’m interested in sharing and proliferating the possibility of creating new ways of saying things, new ways of thinking. Hacking language, which is one of the most castrative and repressive things we have as social, thinking, and speaking beings.

What motivated your decision to release the singles as part of a narrative in non-linear videos?

LPB: The album is also a book and a movie. The book comes out in June and the movie in July. Therefore, they are linear. They belong to a greater story. I’d love to screen it all over the world and I’m working on it. The singles are chapters 3 and 4 of that movie, which features songs from the record. I was interested in sharing a little bit of what we did. It was all a huge team effort. I always work with my friends. It’s all I care about and all I’m interested in, working with friends. It’s an excuse to play around together and elevate each other’s strengths.

What bands that you find inspiring do you think more people should be listening to?

LPB: I’ve got 4 different playlists on my Spotify where you can find what I like and what inspires me.

Now that the album is out, what do you see on the horizon? Are you going to release more music like an EP or another album?

I’m a constant worker. As I said before, a book is coming out soon and also a movie which expands and enriches the world of Golpe de (M)Suerte. There are also two singles already finished that will come out in September and we’re recording the next album with Carola, for which I’m taking collaborations and donations from the public. I’m an independent worker and money is not easy to come by with just classes. People are really into it and they send me cafecitos. So little by little and with a load of effort, you’ll get to know more about the Berreta universe.