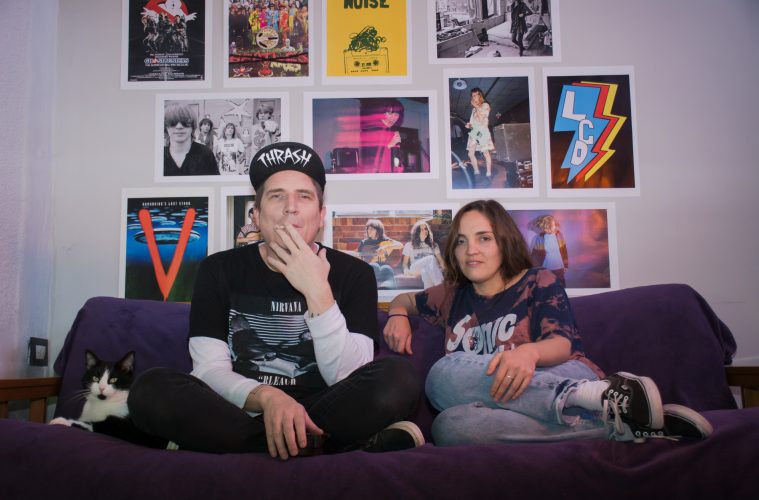 Last year, a duo from a town in Patagonia released an EP titled La Catástrofe es Universal. As outsiders to the indie-rock scene of the greater Buenos Aires region, it’s hard to break into the public consciousness. It helps to make great music, of course. Our attention picqued by their irreverent band name, the album won us over with its hooky choruses and refreshing energy. We ended up selecting it as one of our favorite albums of 2020.

Club de Haters is back with a new single, “Todo Lo Que Quieras,” which ups the ante. The song is a delight, featuring layers upon layers of distorted guitars and vocals that capture a certain childlike wistfulness that hits about a dozen different nostalgia points at once. We were able to chat with Santiago Min and Noelia Vivas about their new tunes, how the pandemic affected the band’s career trajectory, and their plans for the future.

Congratulations on the new single “Todo Lo Que Quieras.” Is this song a preview of the new album?

Santiago: It is a single that will surely be part of an album. We don’t have the album yet. We are releasing the songs little by little, it is not like they are all recorded. It hasn’t even been a year since we released the EP. We believe that we’ll have it this year, probably closer to the end of the year. Releasing a single takes the same amount of effort as making a record, almost, in terms of production. But at the same time we know that releasing a full album is more complex nowadays. We like the album format and we are going to put one out, but first we wanted to put out a couple of singles to kill our anxiety, and then dedicate ourselves to the album.

It is also the band’s first music video. Why the decision to make a music video?

Noelia: Last year we did attempt to make a video for one of the songs on the EP, but because of the pandemic it was never completed. Due to the cases of Covid and the restrictions, we couldn’t make it happen. We finally were able to record one using limited resources. We did it by ourselves, with friends who helped us. The idea of making a video has always been present because we are interested in telling stories, we are interested in accompanying music with the visuals as well. Luckily we were able to.

When it was time to record these new songs, did you approach the writing or recording process differently?

Santiago: It is a natural progression. We were late in releasing singles because when we finished the EP, we started promoting it, and we were already preparing another album. When we made the first one, we didn’t think about anything other than making the record. Noe was much more interested in promoting. I was a bit frustrated with the subject of promoting music. Noe pushed the project in that direction, luckily. When we finished the album, we had already been working on other songs. We made four, of a very different sonic nature. We said “hold on, we have much more to say on this side of simplicity.” Because it was a much more complex production in terms of sound and aesthetic. We stashed those songs away. We’ll release them at some point.

We had to stop and ask ourselves “is this what we want to communicate?” We decided that no, not for now. Especially considering the fact that we don’t have a fixed band yet. For now there are only two of us doing the whole musical thing. We decided to go back to what we’ve done, which is quite simple, but not “simple” from a place of sloppiness but from conception.

Club de Haters is a relatively young project. You started at the end of 2019, the album came out in 2020, and there are already new songs. Did the quarantine situation influence the pace of work in any way?

Santiago: In my opinion, what the pandemic accelerated was the process of unifying our project. But the way of working did not change. I am quite obsessive about the studio – it gives me a lot of pleasure to do it. We have a home studio that allows us to work the hours we want. In that sense it did not change us, we didn’t find ourselves thinking “we have to produce because there is a pandemic.” What it did do was bring the project together.

Noelia: From my point of view, I do feel that the project saved quarantine for me. If it hadn’t been for this project, I don’t know what I would’ve done throughout the pandemic. We focused on the project, on the songs, on sharing it, communicating it. That gave me a great purpose and it saved me from the pandemic.

Santiago: Of course. I was referring to the way of working. I think that without a pandemic it would have been the same way, the same intensity.

Noelia: Santi is obsessive. To put it lovingly, he is a studio nerd, spending many hours in the studio.

Memory is very tied to music. These songs, the ones on the EP and the new ones, for the rest of your lives are going to bring you right back to this extremely strange moment in everyone’s lives. Do you have an album, band, or song that you associate very closely with a very specific period in your life?

Noelia: Because of when we were born, we are both very influenced by music and the 80s and 90s.

Santiago: More 90s for me. I don’t really have much 80s influence..

Santiago: The album Loco Live by the Ramones influenced me greatly. My older brother showed it to me when I was 13 years old and it changed my life forever. It got me started in punk rock. Nirvana also changed my life. Also some tango lyrics — I dabbled briefly in tango. Also jazz, due to my studies. But as far as albums that changed my life, I’d say Loco Live by the Ramones and Bleach by Nirvana. Maybe Dirty by Sonic Youth. And there were several Argentine punk bands that influenced me. Bands such as 2 Minutos, Flema, Fun People, many others.

I don’t know anything about Trelew. I’ve never been and I don’t know other artists from that area. Is there a local music scene?

Santiago: It is a city people don’t know much about. There is a scene, of course. What it does not have is continuity, because most bands want to leave to go to CABA or Rosario or Córdoba. There are some bands that remain and others dissolve. The problem is that it’s very difficult to develop and continue a project here. Although I think the pandemic, this switch towards virtuality, is changing the paradigm, at least for now. But until 3 years ago it was very difficult to come up with a project outside of the large urban areas. That was always complicated. So projects in general, with few exceptions, do not last long. They last 3, 4, 5 years at most. Bands go on different paths or disband. But there is a scene.

What were some of your musical projects before Club de Haters?

Noelia: This is my first project. In fact, I never really made music. I am a social communicator and a photographer. The one who does have a long history is Santi.

Santiago: But Noe is extremely musical. That’s why we managed to get this project going. She has a natural freshness that I haven’t been able to find in anyone. I’ve done a lot of things. I’ve always been creatively restless. Except for cumbia, I’ve done just about everything. I was part of the 90s punk scene in Capital Federal. I went into jazz, into tango, into experimental music both from an electronic and an orchestral perspective.

I had a lot of projects but this is the first one that I am happy with in every way. How the songs come about, participation, reach, and response. Generally I felt that the promotional side always falls short. You meet people who you think are on your same wavelength and then you realize they see music a hobby. For me, this is not a hobby. I have taken it very seriously since I was 16 years old. I was always very clear that I wanted to be a musician. What is great is the response. Just as Loco Live saved my life, it’s good when someone tells you “you saved my night.” For us that is the greatest reward.

I’m surprised it’s your first project, Noelia. You’re a natural. How did the idea of joining forces come about?

Noelia: We are a couple, that was our initial bond. I never dedicated myself to music but my life was always marked by music. I have always been a listener. It occupies a very important place, although I never dedicated myself to that. At the end of 2019 Santi was not working on a specific project, I don’t know if it was him or me who proposed making songs together, just to try it out. No intention of releasing anything, just for the fun of making songs. So it happened. We took a trip in January to Ushuaia, Santi brought a guitar and these songs began to come out. When we returned we started recording them.

Santiago: At first I had some doubts about the project, but because of my personal frustrations with music. Luckily I listened to Noe and we continued. On the one hand, I was excited to work with someone who hadn’t had any musical projects, but I was concerned because she is my partner too. Sometimes there are discussions that have to do with the musical that can bleen into the personal. But none of that happened, luckily. Everything came out very naturally.

The project was affected by the pandemic. Did you get to play live? Is it something you want to do?

Santiago: We didn’t get to do it. We really want to play live, but when things are back to normal. Playing in a Covid situation is not exciting for us at all. Honestly, it depresses me a bit to see the shows with very few scattered people, there cannot be much response from the public because of social distancing issues. Until we get to that point, I don’t think we’ll be playing live for people. Until it is normalized well and we can all be safe. Something interesting may arise at some point, but not for now..

I hope it can be done soon, I would love to see you live.

Santiago: We are also looking forward to it.