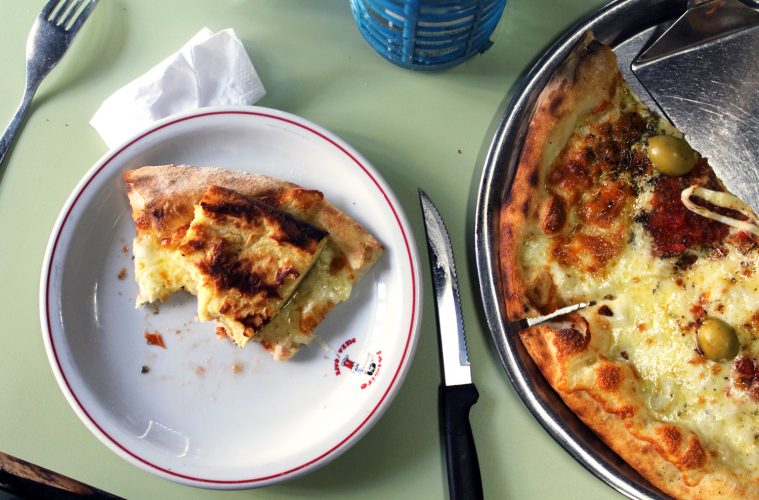 With most pizza menus, ordering straight up muzza is usually not a bi-product of my own free will. More often than not, a basic cheese is an unhappy media masa unenthusiastically tossed together that, even when coming from reputable shops, shares more of a resemblance to a bland pie grabbed out of the supermarket freezer aisle than a pizza that has been freshly tossed and baked.

Modern pizza is rooted in the impoverished. Italian street vendors sold yeast heavy solo flatbread to the lower classes whose poverty left even the simplest ingredients off the table. Bread is durable and inexpensive and just enough to keep hunger at an arms length for a little bit longer. The poor man’s muzza has been immortalized by the grungy Ugi’s pizza chains, a staple of my early 20’s diet, and as the unwelcome guest at every shit birthday party you have ever been to.

The muzzarela con salsa de tomate may be the best thing on the menu at Jaimito, a bar and cafetería on a quiet street on the outskirts of Boedo. It is the only thing I have tried on the menu with the exception of a beef empanada and flan mixto and I’ll stand by the assertion. I’ve inhaled it  fresh out of the oven, enjoyed chilled slices with cold brew the morning after and sought recluse during a hallucinogenic come down where the only thing that felt right in the vastness of the universe was a bubbly glass bottled Cola and a large pizza to myself.

“We only have pizza,” the waiter always mumbles during the dinner service. From the large open dining room you can hear the fire roar from the pizza oven and palms meeting dough like a thunderous applause. While during the day, Jaimito resembles a men’s club that caters to the neighborhood’s working class and passing taxi drivers that blend into the decades old olive green tables and chairs, at night, it is a decidedly familial restaurant where everyone seems to know one another.

The pizza de muzza is tossed thin and arrives to the table with a delightful perfume of molten cheese that stretches and pulls as each slice is removed from the over-sized round. The edges brown and crunch under every bite. It is cooked just right that the cheese that rests around the crust turns into auburn brown flakes like molten lava that rest atop balloons of dough. A Pollock-stroke of brick red tomato sauce is swirled around the unctuous, wonderfully chewy cheese around the center and is heightened by soft bursts of salt from the pitted green olives. It all vanishes so quickly that you are glad the pizzas come oversized, barely able to fit inside a standard pizza box.

And if their is still a bit of room, there always is, it would be remiss not to order a flan mixto. Made with the same haphazard perfection, it always burns slightly at the bottom, a welcome crunchy mistake that bitters and sings a lovely duet with a generous cloud of sweet cream and spoonful of dulce de leche, a breed of dessert that always taste better at an old cantina.

Jaimito
Address: Virrey Liniers 709, Boedo
Open: Mondays from 8am to 4pm; Tuesday through Saturday 8am to midnight; Sundays from 7pm to midnight