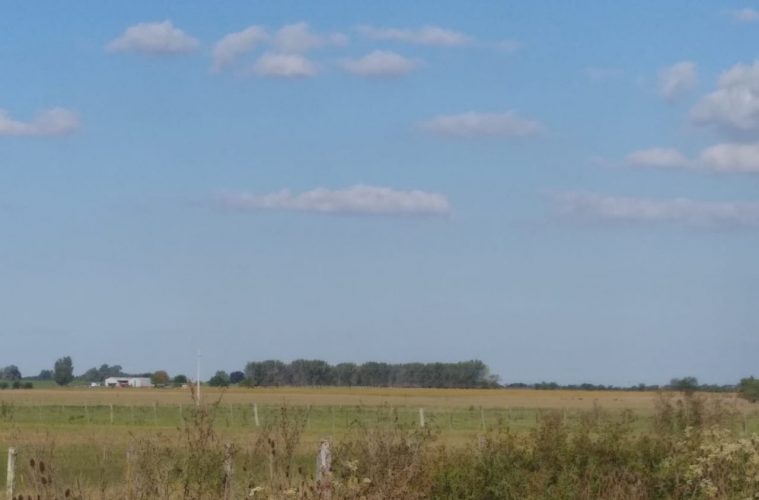 There is no sign announcing San Antonio de Areco at the gas station on the side of the highway where the Chevalier omnibus leaves me. Yet it’s only a few minutes’ walk from the historic center of this tiny town, which lies on the Areco river, in the Argentine pampas, 113 kms from Buenos Aires.

On the way to my posada, I pass single story stone homes, near the Ruiz de Arellano Square, with windows wide open. Inside, families huddle around televisions; the smell of milanesas carrying from the kitchens. I pass a rec center, where the squeaking of sneakers reveals a kids’ basketball game. I stand at the open doors, unnoticed for a moment, and watch them run up and down the court.

One does not need to grow up in a place like this to suffer its nostalgic charms —  an invitation for imagining a more idyllic life. Fewer hassles, less noise, no traffic: a the grass is always greener, in a bucolic setting with very green grass.

Gabriela  receives me at the door. She is a porteña, who gave up CABA to raise her daughters in a quieter environment. Here, she explains, if she needs to make an appointment with the doctor, she can see him that same day. And when she wants to see a show or meet up with her girlfriends in the city, she can be up and back that evening.

It’s clear she has embraced the pace of this place. Without rush, she walks me through a map point by point. The silver shops one might want to visit; the museums; there are some restaurants, some peñas. Only problem is that it is Monday. Covid days. The Museo Las Lilas and the Museo Güiraldes will be closed until Thursday; Platero Draghi is by appointment; and if you want something unique from Sergio Sanchez Platero, it must be ordered in advance. Choices of restaurants are very limited — and forget the bars.

So, what to do when all the tourist suggestions from friends and the internet aren’t available?

Take a moment. Breathe in the fresh air. And begin the quest for alpargatas. The two recommendations I get are La Filomena and Forrajes Maggio

Forrajes Maggio is heaven. Simple in that most perfect way things are so rarely simple. It’s a hardware store & gaucho super-shop. All your campo needs in one spot. They let me try on as many alpargatas as I please, until I find the best fit in maroon. Five-hundred pesos for these beauties– such an incredible deal, I grab an extra pair.

The woman ringing me up asks where I’m from. I tell her. She pauses. But now you are in the most beautiful country in the world, she says. And, in that instant, with two new pairs of alpargatas in my bag, I can’t disagree.

When I walk into La Filomena, the proprietor is giving a Spanish lesson to her daughter behind the counter. These days she must run a store and tutor her child simultaneously. They don’t notice me at first, as I browse the colorful array of boinas, belts, ponchos and wallets. But once she does, she cannot be more helpful. Business has suffered this year, she explains. They even moved the shop to a new location. But she stays positive, hopeful.

She punches a new hole in a rawhide leather polo belt ($1100 ARS), which I liked, but was a little big on me. As she runs my debit card, her daughter shyly approaches. She loved her English class before the pandemic, I’m told. But now the school is not offering those classes.

I say goodbye, in English, and she hides behind her mom.

That night at El Tokio, the only waitress appears over-matched by a near full restaurant. I have a Beckettian-wait at a sidewalk table. I’m facing the plaza, next to the Parroquia San Antonio de Padua, under a full worm moon, watching four stray dogs snipe at the fender of a Renault trying to make it down the narrow cobblestone street. For once, I am not stressing the delay. Perhaps here I could finally find patience.

After the waitress takes my order, she fills my cup to the lip with the house tinto (130 pesos), and it keeps good company until the typical bodegon fare arrives.

In the morning, I’m reminded that it’s free to do the casco historico, and I almost push myself to go. However, the tours are at 10am. Right as I am finishing my breakfast of rolls, croissants, cream cheese, marmalada, dulce de leche, coffee and orange juice. Plus, I already have my plan: a 7km bike ride out to Vagues, which Gabriela has told me is her favorite local excursion.

I leave the town, crossing the highway, on one of the bikes that the posada lends to its guests. On Avenida Dr Duran, where pines and eucalyptus trees hug the narrow road, the ride becomes meditation. Tranquil. There are very few cars on the road. Just scattered farms appear; then a group of teens enjoying picada down by a stream; a hotel de campo fittingly named La Perdida.

I hit the train tracks, and stop for a picture. Who needs a tour or a museum when gratis, one can look out on this relic of frigid British Imperialism. Today there’s a sign: Disculpe las molestias. Estamos trabajando. Yet there are no workers, nor evidence of any work.

I turn left, and keep going down a dirt path, with a couple of small farmhouses– one with a sign in the front yard: antiquities. And more country: grazing cows; horses chilling under shady trees. On the side of a large faded barn, I read Vagues.

I pause at the side of the path. A sparrowhawk alights on the edge of a branch above my head.

Soon, I will turn around, Head back to the posada. Rest the bike up against a wall with a folkloric mural of men gathered around listening to a guitarist. I’ll shower and change.

I’ll sit on a rocking chair in the garden. A sage bush with violet flowers to one side, and on the other, antique soda siphons on a wooden shelf above a brick asado. It won’t be long now until I’ll make my way to Ambigu for a healthier and more artistic meal than the one from El Tokio. It won’t be long until the moon will rise, the stars will appear. Until the mosquitos will make way for the crickets. It won’t be long until weeknight Areco will offer me one more harmony before I must return to the city.