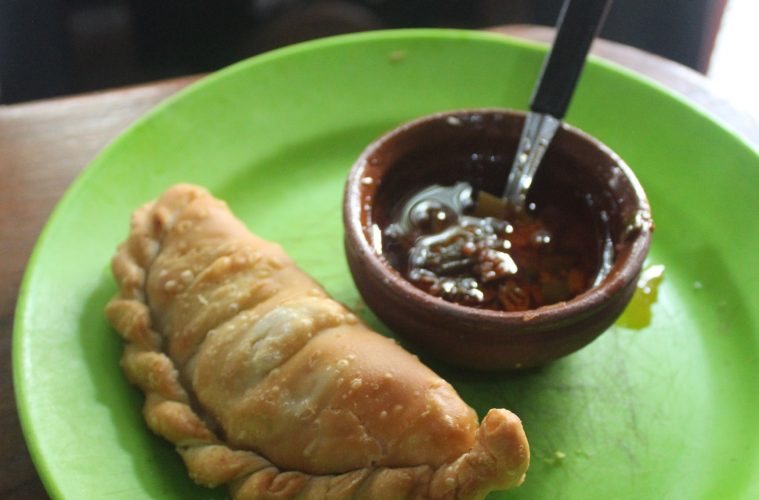 The humble empanada is both the source of incredible joy and overwhelming anxiety. Trying a new spot is like being launched into space: what is waiting for me out there in the great black expanse? Will it be a glorious, buttery pocket of cumin and cayenne flavored chicken or a limp pastry filled mostly with hot air, regret and a lonely slimy slice of ham?

Today’s star, I promise, will never disappoint: carne cortada al cuchillo or, to be more explicit, the obra maestro that is the carne frita at El Gauchito, a cramped little boliche painted in red on the tail end of Avenida Independencia in San Telmo. Blink at just the millisecond it takes to walk past and you’ll miss it. I did.

Even the most die-hard San Telmo neighbors don’t know the bounty of El Gauchito. And it is easy to see why. Besides being relatively invisible, if you do catch a glimpse inside, the best merchandise is hidden from view. A long glass display case shows off a colossal collection of your basic oven-baked porteño variety: ham and cheese, ground beef, chicken, blue cheese, mystery vegetable and countless other lactose-heavy combinations. There are also the occasional humita and locro, when the weather is right and owner Robert Ormeño is in the mood.

But it is his crowning glory, a buttery bubbled-out fried empanada that keeps you coming back again and again once you have become privy to the door in the wardrobe.

Ormeño hails from La Rioja, a mountainous region where cactus and carob trees jut upwards from the arid sandy soil. His recipe doesn’t stray far from the family. Beef is thinly chopped alongside small wedges of potato and leafy green onion, the latter, according to Ormeno, is what gives it a Riojano signature. All is cooked down in a cumin and cayenne rich stock that drips auburn red once the flakey dough has been compromised. The house suggestion is to split off just enough of the tip to stuff it with a house hot sauce. And I say hot sauce in porteño speak. It is an oil-based sauce prepared with crushed red pepper and more green onion, the level of spice changes from one visit to the next, but is usually just enough to add an extra layer of chubby to the already buttery dough.

Don’t think about ordering anything else and just ask for 4. If a stranger wanders in unaware of the secret, it’s your duty to induct them into the club.

Hours: Wednesday through Monday 11:30am to 4pm and 8pm to midnight