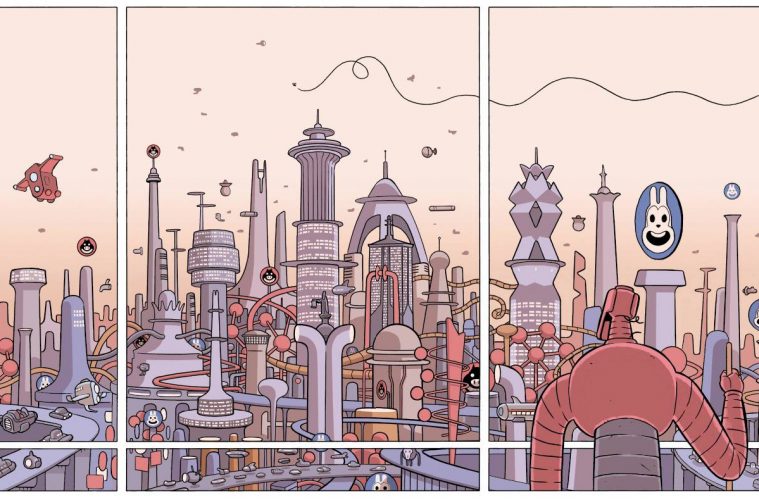 Welcome once again to this corner of comic appreciation within La La Lista, where we’ll be preaching about the virtues of the contemporary Argentine comic scene, which won’t stop producing interesting material for hungry eyes. On this occasion, we’ll be talking about four local comics that share a common characteristic: storytelling without dialogue, where text is (nearly) non-existent. So if you’re a reader of the site who is interested in the comic artform but still don’t completely dominate the Spanish language, or you’re simply interested in exploring comic stories where the story simply does not include text balloons, we’ve got you covered. This is a safe space, far from any sort of judgment over your preference of artwork over text.

It might seem a bit trivial, but the old “show, don’t tell” concept becomes even more interesting when applied to comics. Creating a story without dialogue might seem easy in comics, but it puts the author’s narrative tools to the test, as well as their ability to illustrate situations in a readable way. In a medium where text balloons serve as a sort of guide for how to read along the panels, these textless illustrations turn into a task where the construction of these panel sequences must contain enough information for the reader to be able to follow the story without getting lost in the process.

A comic without any dialogue is also a special kind of treat. It allows for an appreciation of a more poetic, distilled kind of storytelling by the author. The absence of text in the narration could be a great excuse to take more chances on different kinds of stories, where a more varied arsenal of storytelling and narrative resources inherent to the comics medium can be used. When done right, the result is a unique experience that serves as a manifesto by the author about how to tackle themes and feelings that go beyond words. Out of the comics that have been produced locally in the last few years, I’ll be highlighting the following stories which display a surplus of quality and creativity to make up for what they lack in wordcount.

This story, originally published in the comics magazine Fierro and then released as a book in 2016, takes place in a dystopian future; a bleak world taken over by corporate interests, with two companies locking horns in a permanent conflict over control of the population through consumerist tactics and a constant state of surveillance. The daily life of a simple office worker changes dramatically when he bumps into a briefcase that came from outer space.

El dia mas largo del Futuro (The Longest Day of the Future) is, above all, a space comedy, filled with screwball misunderstandings and slapstick humor. Its protagonist, as well as the setting where it takes place, recalls film classics such as Chaplin’s Modern Times as well as Fritz Lang’s Metropolis sifted through the vision of Jim Woodring’s (also wordless) psychedelic comics. It’s a story where, beyond its comedic tone, the author portrays a futuristic dystopia which mirrors situations and institutions which are more real than we’d like to think.

Lucas Varela’s superb art style is put in service of a narrative that is as manic and chaotic as it is fluid and rhythmic. There may be no dialogue in this book, but the sounds of lasers hitting walls, the turbines of spaceships as they take flight, and the loud machinery of robots marching the streets are all vivid and present throughout its pages. A highly recommended book for all lovers of science fiction, comedy, or the union of both genres. Space hijinks ensue!

In each page, Podestá displays his expertise with the high-contrast black-and-white art style. In keeping with the acts represented in its pages, characters seem to be born from the deepest blacks. In the midst of this darkness, an anonymous character arms himself with courage and decides to face evil head-on. Through his eyes, we can see horror up close, but there are also instances of com-passion and tenderness that pop up briefly, only to quickly wither away. It’s a story that isn’t afraid to make violence explicit, as well as the fetishization of bodies and the bloodiest impulses. However, it’s not a free show; it also happens to employ a lot of resources from the medium’s narrative toolbox:  Perro (Dog) may lack words, but the symbols of power and pained expressions speak in capital letters.

There is one more peculiar, experimental  aspect of this book I’d like to highlight: as well as lacking dialogue, Perro also happens to feature two different endings. So if you happen to bump into a copy of the book, you might find a wholly different ending if you pick up another.

It’s pretty tough to try to describe Roberta Di Paolo’s book, which resides in the fringes of the experimental comic form (what the Wai Comics catalogue specializes in). Lacking in the classic concept of panels but impossible to reduce to a “series of illustrations”, El observador silencioso (The Silent Observer) is a reflection on the immanence of trees as beings. Born from the author’s meditation on the old question “if a tree falls in the woods and nobody is around to hear it, does it make a sound?”, it’s a piece of work that seeks to find answers about the essence of trees as beings, approaching them on their own terms.

Throughout the pages of the book, one can feel the author going through the stages of her experimental quest. There’s an approach that is not merely visual, but also surprisingly tactile; frotagge as a technique to capture the textures of trees, putting the page directly on crusts and leaves. Time is also a factor that appears in the book as a way to underline its themes. Time goes by differently for trees and humans, and the exercise of attempting to decipher the essence of trees involves a special care from the author (in capturing the nuances of light on page, what is static and what is mobile), as well as a special care from the reader to fully process each page. This process occurs best when one tries to de-naturalize what one takes for granted.

The fact that the trees we see every day in every block we walk through are there “just because” seems to be a perception that Di Paolo seeks to examine and re-signify. Like an alien that lands on our planet to document its lifeforms, starting with one of the oldest beings on Earth, with visuals as our only way to understand when words are not an option. Upon finalizing this visual reading, one comes to the question: Who is the Silent Observer?  Is it us? Is it the trees reflecting on what’s around them? In my case, I’ve been through its pages multiple times and still haven’t landed on an answer, but every time I make my way through the pages of this book I feel like I understand a little bit more about a secret that’s spoken in a language I don’t know yet.

Nature as a narrative entity is also a part in this piece of work. In Mi cuerpo, un bosque (My Body, A Forest), Maelitha explores the experience and the meaning of maternity through two female characters in northern Argentina in the 19th century. Through the course of its story, the wild environment and its animal and vegetable elements will be aiding these characters as they go through trials and tribulations that are hard to put into words. These women are reunited through extraordinary circumstances, their paths meeting at the crossroads between life and death, where animal instinct coexists with a human sensibility.

The result is a piece of work that is as beautiful as it is raw and immediate. Maelitha’s unmistakable art style represents a visual metaphor that does not require dialogue to explore atemporal ruminations. Is maternity a merely biological matter? How much of it involves yearning and instinct? Is fertility — in a female body, in a forest — a determining factor? What happens with the desire to create life when the ground is barren? In the end, as Dr. Ian Malcolm says in Jurassic Park, “Nature finds a way”.

This book is Maelitha’s first long-form piece of work. She is one of the authors who participated in the PIBAS anthology; she is a rising figure in the Buenos Aires fanzine scene. It’s part of the Genesis collection for Barro Editora, a platform for comic book authors seeking to create their first work that exceeds the length of a self-published fanzine.

That’s all for this installment of LTD Edition! We hope you’ve found something within these reviews that has filled you with enough enthusiasm to get these books into your hands. At the very least, you can no longer claim the language barrier is a limiting factor keeping you from enjoying Argentine comics.