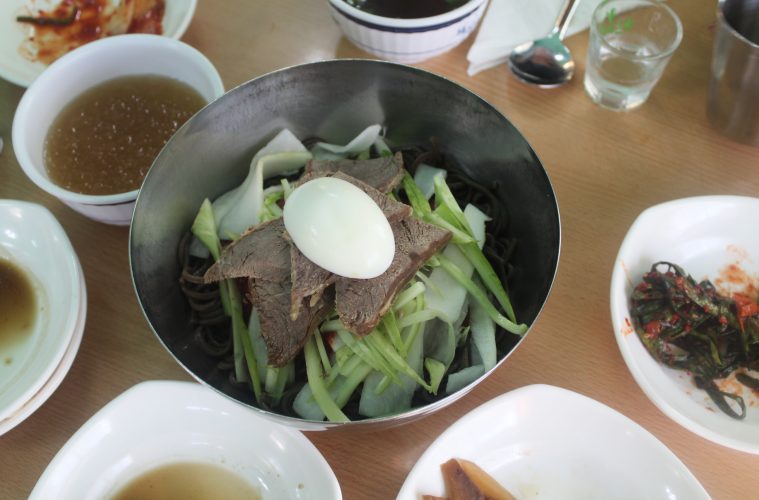 It’s topped off with a sheet of ice, more than anticipated, that rests peacefully above a carmel brown broth. Once it begins to melt, it shrinks quicker than a glacier on the North Pole, popping and breaking apart to slowly reveal a long chunk of beef roast. Twists of mud-colored buckwheat noodles are meant to be butchered with a pair of scissors with pastel pink handles. You’re supposed to cut the noodles up, the server will explain side-eyed but kindly, confident that you are a tourist to this particular section of Buenos Aires.

Naengmyeon is a centuries old dish born out of the stately kitchens of Pyongyang and Hamhung in North Korea. Oddly enough, it was concocted to combat the unforgiving winters – buckwheat noodles are chilled and served with a tangy broth often spiced with a thick spoonful of gochujang, a crimson red fermented chile paste. Following the Korean War, the recipe was popularized across the peninsula. During the hot porteño summers, at places like Singul Bongul, nearly every table is enjoying a bowl.

The restaurant rests on the borders between Flores and Floresta, where small Korean grocery stores and family-style restaurants are crammed between the innumerable wholesale clothing shops that define the neighborhood. Dip into a grocery and the constant rattle of trolleys scooting boxes of garments across the barrio falls out of focus as the brain becomes overloaded by the sight of homemade shrimp pastes, frozen mandu (dumplings) and vats of red-licked kimchi. 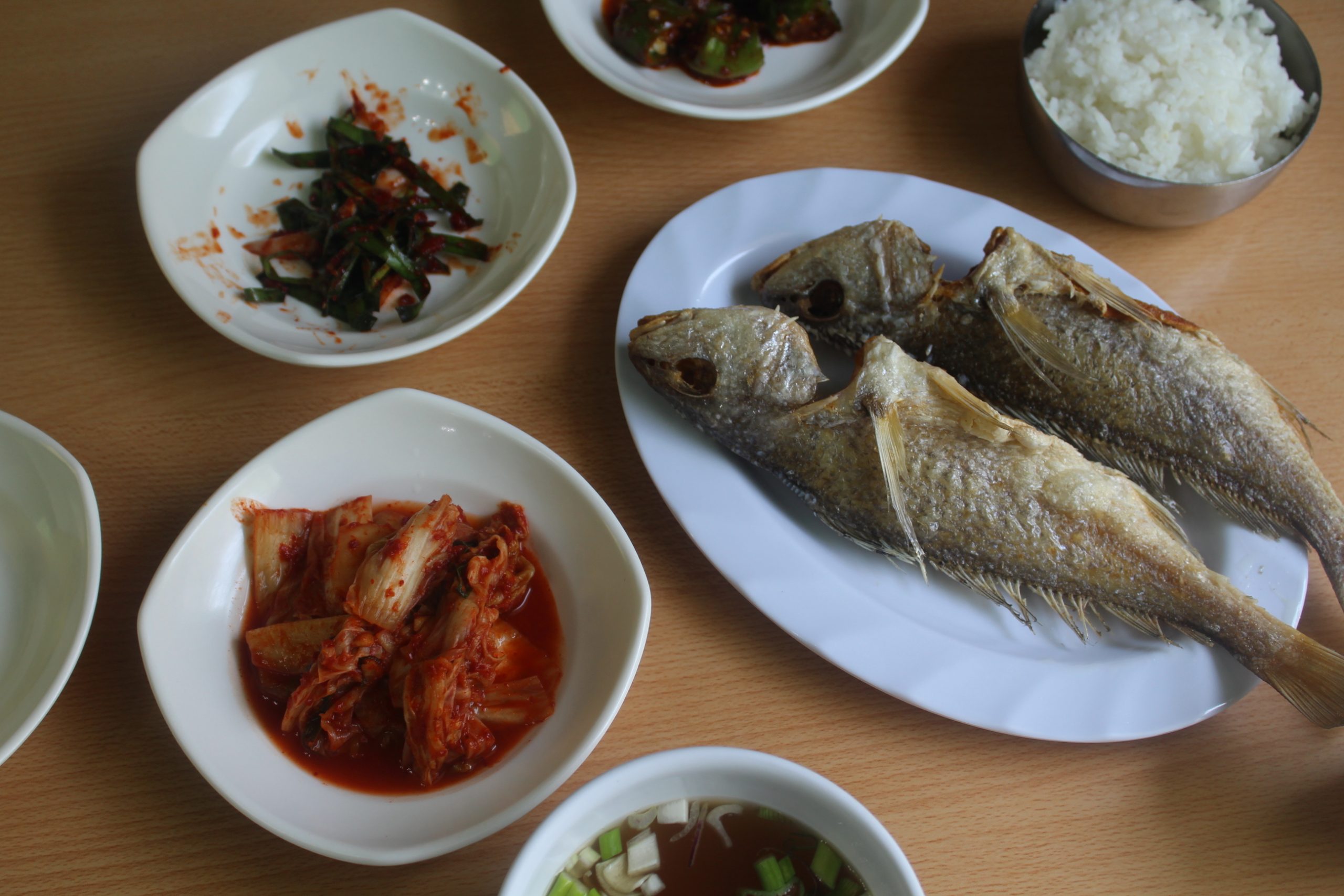 Matriarch Susana Kim is likely to greet you at the door with blushed cheeks and a gentle wave to your table – unless, of course, she is lunching herself with a group of girlfriends. In any case, you will likely never fall far out of her gaze. The dining room is painted in a collegiate orange and blue inside an old home that has grown far beyond its glory days.

Six varieties of cold noodles decorate the menu – served with or without broth, spicy or bland, fine or thick buckwheat noodles. Mul naengmyeon, or buckwheat noodles with cold beef broth, has a sweetness that pulls you unexpectedly like a strong riptide. A blast of fruity broth, almost like a pickled watermelon, sweeps under the tongue and shoots to the back of the throat. Notes of plum disguised as raw triangles of daikon radish and stabs of zucchini are powerfully tangy. I prefer the bibim naengmyeon, served with a slushed broth on the side that allows you to control the tang. Buckwheat noodles are satisfyingly chewy with a sweetness that rests languidly in the distance. Squirts of a nasally mustard-based hot sauce gives a welcome zap but be careful not to numb the tongue with a overly zealous hand – it would be the equivalent of eating a ball of wasabi whole.

There is also a hot kimchi jigae. Kimchi, tofu and bursts of pork are wrapped into a spicy red broth. Intense fat and fermented flavors coil around the tongue but once the floppy planks of kimchi and cubes of pork are all gone the soup begins to soften and compartmentalize. Suddenly a lemony citrus and distant sweetness, like an apple or under ripe pear, begin to appear. Alt tang was lost in translation – the expected miniature golden roe was actually large, veiny egg sacks that felt like a cross between a fresh chorizo and spam minus the savory flavor. 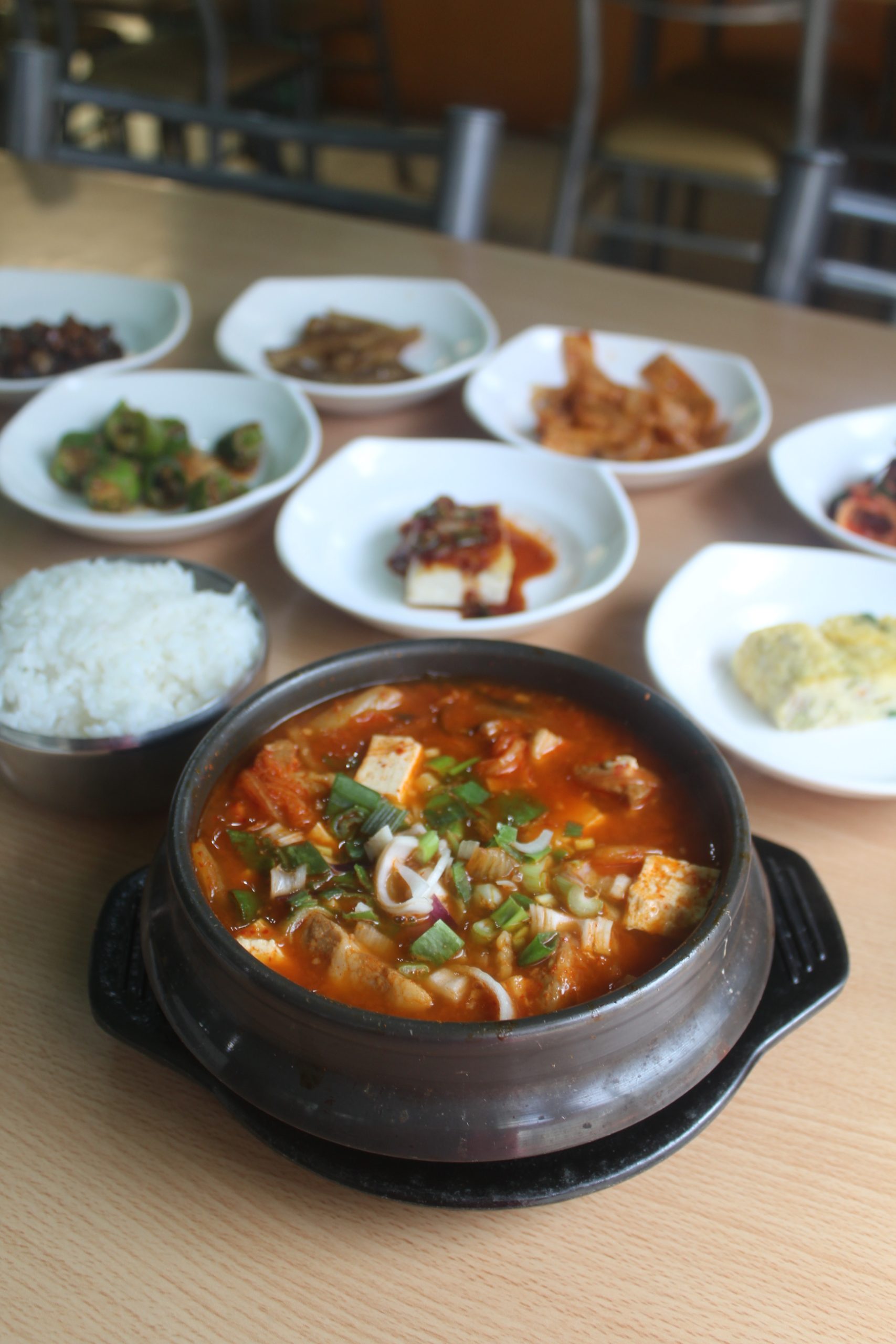 There is also whole mackerel fried in a flash. Expect stares from more experienced diners as you quickly transition from delicately extracting its buttery meat off the bone to pulling everything apart with your hands and biting straight off the spine. Bulgogi falls flat but soft bites of pork marinated in an in-house made gochujang are absolutely addictive. Don’t skip out on the bibimbap – sticky white rice is loaded with vegetables like carrot and bean sprouts, a fried egg and chunks of pork. Pour the small bowl of barbecue flavored gochujang and mix it all together.

To drink, small metal cups of cold water is complimentary. Soju, an astringent rice liquor, will make you blush if the kimchi soup doesn’t.