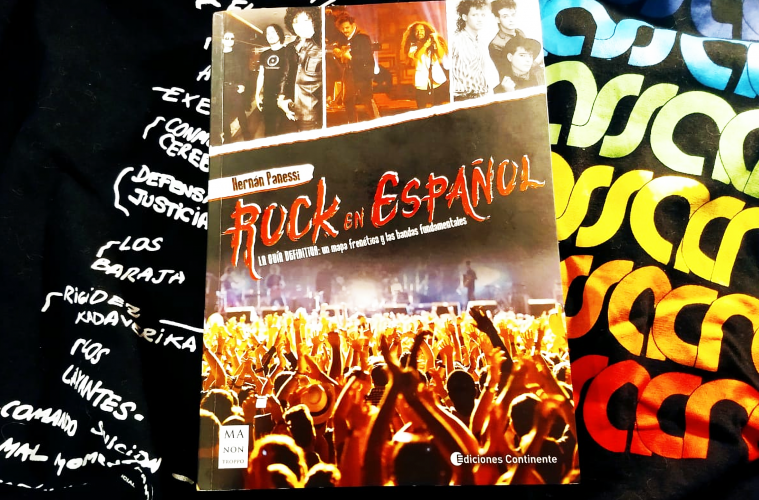 In times when the Royal Spanish Academy chooses to enable and include terms such as “covidiota” or “corona baby” but continues to oppose inclusive language, I think it’s a great moment to reconsider the people and institutions we take as authorities on certain subjects. So if someone is going to talk to me about rock, I want it to be Panessi.

Yes. It’s only rockn’roll, in Spanish, but we like it. And Panessi was in charge of collecting a huge amount of data. This book is not only an encyclopedia of the fundamental bands of the genre, it also serves as a sociopolitical history book. Because, above all, rock is meant to be rebellious and boy have Spanish speakers had a lot of things to rebel against. Dictatorships, crises, repression. The link between rock and society. Music as a liberating impulse. And also the resignification of a sound that arrived as a rigid import and unfurled into a thousand variants mixed with folklore, tango, murga, cumbia, all kinds of things. Giving birth to new genres. Maybe even  inventing punk, who knows.

We asked Panessi about the process of writing the book (this is a translated version of his remarks): “What I enjoyed the most was being able to nerd out a lot. To go in depth into the history of Spanish-language rock, and to study in depth the history of Argentine rock. I always had a close relationship with it due to my love for music and for the profession of cultural journalism. To also be able to delve into artists I had long been meaning to. I always told myself I have to listen to the entire Charly García discography, I have to listen to the entire discography of Spinetta, I have to listen to the entire run of Soda Stereo. And to do that work as an archivist, retracing the footsteps of those artists was great . I enjoyed it a lot. I also feel like I saw everything through the eyes of a child. Like I added extra scotch tape to the posters of those artists on my wall, so they won’t ever fall off again.”

Everybody is in the book. From the most obvious and inevitable names such as Héroes del Silencio, Café Tacvba and Los Redonditos de Ricota, to the most… how can I put it… questionable.

In response to my malicious query about what was the most difficult or least enjoyable aspect of writing the book (which for me clearly had to do with having to write positively about bands that, in my opinion, are a awful; kisses to Maná and La Ley) Panessi not only made a real effort to lay the cards out on the table and give each and every one of the bands the importance they deserve beyond our own personal opinions (because let’s face it, they broke down many doors at the time), but also provided me with a lovely answer.

“The thing that I enjoyed the least was quite possibly the entire editing process. Because of the anxiety of delivering the finished file. Because of the tediousness of reading a book as long as this one that has many entries, a lot of text. Rereading that three or four times was tedious. The hardest thing to do. It was difficult due to the fact that I was sitting there for many hours. ‘Ass hours’. Reading and rereading the same thing many times.”

Many names emerged during the investigation and compilation process. Bands, people, satellites orbiting near the world of rock that, despite not sounding typical of the genre, helped it to grow and expand. Many women carried bands, cultural movements, and also broke the mandate of what they were not supposed to do. Again, you dig a little and you’ll find girls reappearing where they “weren’t supposed to be,” but is actually their rightful place. Patricia Sosa with La Torre, Viuda e Hijas del Roque Enroll, Alaska, Catunga Pereira, Fabiana Cantilo, Andrea Álvarez and my all-time favorites Pat Pietrafesa and María Gabriela Epumer, among many others, building the DNA of Spanish-language rock.

The good news is that the “ass hours” Panessi invested paid off. The result is a wonderful and deeply relevant book. As a “little rocker flower” and fangirl that I am, I do feel that it’s missing some names (how did you leave out Massacre?), but that it contributes a lot of data and links everything together masterfully. It also contains a comprehensive list of 50 essential albums, another of 20 fundamental films, and an accompanying playlist that sums everything up beautifully.

“I had some discoveries. For example, when I was putting bands together, one of the book’s publishers Ma Non Troppo requested I include a good amount of Spanish representation, logically, and when I started to putting it all together, Cristian Baral — who is a good friend —  suggested I check out La Unión. This led to discovering “Lobo-hombre en París,” the first of the ‘new’ songs I found thanks to this project, and I was blown away. It’s not that I didn’t expect something good from from La Unión, I just didn’t have them in my rader, I had never heard of this track, I had never come across that song that blew me away.”

“Along those same lines, after maybe a decade I rediscovered “Bolero Falaz” by Aterciopelados, a very beautiful song. A song that I now listen to much more regularly and that I had not listened to in years. Same with “Dejate Caer,” the original version by Los Tres. Or relistening to Control Machete. Those rediscoveries were mind-blowing. Going back to those songs that made me happy, or finding new ones that I didn’t know, was great. And then giving a more careful and mature listen to Charly, Spinetta, Los Redondos… listening to those artists with an adult ear was amazing.”