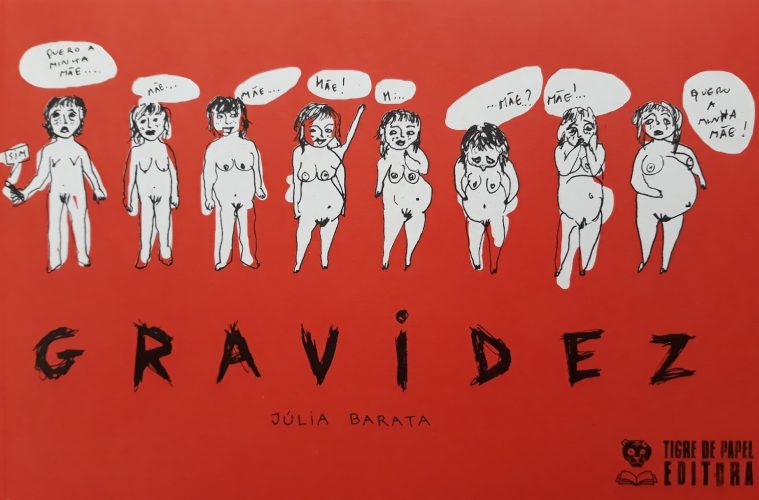 Welcome once more to the corner of La La Lista where we lose ourselves in comics, a kind of illustrated refuge from the endless quarantine. On this occasion, we are going to talk about two works that function in parallel as autobiographical stories, guided by a common line: migratory journeys, building a life in a new country and the impact this causes on the lives of their protagonists and authors.

This seems particularly appropriate for this section of the site. Although I have not (yet) lived the experience of moving to another country, I’ve always found works exploring this theme to be fascinating. I assume that a large percentage of La La Lista readers fall within the definition of expatriates and may feel some extra affinity for the life stories told in Virus Tropical by PowerPaola or Gravidez by Júlia Barata. And to those of you who have never gone through this experience: rest assured, these works are worth reading anyway. We wouldn’t be bringing them up here if they weren’t.

I revisited Virus Tropical last month, as part of its 10th anniversary celebration, and I fell in love with it all over again. Virus Tropical was like a powerful thunderbolt that impacted the Latin American scene, leaving readers in love with its narrative style and inspiring other local illustrators to narrate with images. PowerPaola titled the story after the first event that accounts for her existence in this world: Doctors diagnosed her mother’s pregnancy as “a tropical virus,” since she had her tubes tied after giving birth two two daughters and there was no other diagnosis for the swelling of her belly.

From her birth to her passage to adulthood and separating from her family, Paola builds a beautiful autobiographical coming-of-age story, taking advantage of the best tools of the medium: an enviable capacity for expression through drawing, and the possibility that the comics medium represents of mixing the narrative voice in the present together with the scenes from her childhood and adolescence, with much more elegance and effectiveness than a voice-over in cinema.

What stands out the most throughout its pages is how her life was marked by female figures and a hybrid family identity between Ecuador and Colombia: being the youngest of three sisters, Paola was raised by both her mother Hilda and her sisters Claudia and Patty, whom she looks to as role models. Her father appears as an emotionally and literally distant figure: he decides to return to his native Colombia during Paola’s childhood, leaving her mother to raise the three girls. The Ecuadorian-Colombian identity of the family is explored throughout the work.

Paola grows up through sad experiences such as saying goodbye to her friends in Quito, experiencing the absence of her sisters, the ridicule of her classmates in Colombia for her Ecuadorian accent and for the words she uses. Eventually Paola finds her place in Colombia: her new friends, her first love affairs and a strengthened and resignified bond with her sisters, constantly moving between departures to other destinations and reunions.

For a person who lived all his life in the same city and with his entire family (like me), Virus Tropical offers a way of appreciating how family ties are sustained despite distances and how the identity of a person during those chaotic first 18 years of life is constructed in this context. None of this would be possible without the incredible authorial voice of PowerPaola, who finds the perfect voice between brutal honesty and immense affection towards her characters / relatives to be able to tell the story of how she came into herself.

Eventually, life brought PowerPaola to Buenos Aires, and in this city she was part of a group of illustrators who met regularly at the Varela Varelita bar in Palermo for drawing sessions. There, in 2013, she met a Portuguese illustrator who had recently based in Buenos Aires and was illustrating a project that had started as a doodle on a box of medication. There, she expressed her experiences around migration, her romantic life, and the new experience of being a mother. “The drawing and the story had an urgency that fascinated me.”

With this story, PowerPaola introduces us to the book Gravidez by Júlia Barata (published by Musaraña Editora). Barata clearly documents the frenzied experience of going through pregnancy and migration simultaneously. If PowerPaola’s book is about reaching adulthood and independence, Gravidez (which means “pregnancy” in Portuguese) is about how to reach motherhood through the fears of being responsible for a life, in the midst of a constant migration from Barcelona to Buenos Aires, passing through the protagonist’s native Portugal.

That urgency that Paola describes in Júlia Barata’s work is noticeable in her illustrating style: on each page, the figures are quickly outlined and there seems to be no possibility of drawing vignettes to alternate shots or put together sequences, opting for a style of representation characters repeating their figure on the page, generating a unique visual reading rhythm. The story works well with it: you can feel the anxiety and mood swings of the characters in the sudden changes of expression of the illustrated faces side by side, and in the movements of the bodies leaving a line of dots where their frames used to be.

And that anxiety is well justified; Gravidez shows us tells how an unexpected pregnancy turns a migrant couple’s life plans upside down and raises the need to adapt plans to new conditions: thinking about the arrival of a baby implies a sharp rethinking of the mapternal obligations and the role of the couple. The main characteristic of Júlia Barata as a narrator is that she does not hide anything about her personal process: romantic strife, personal fears, feeling selfish for not wanting to leave behind the hedonism of life without children and the need for comfort in a new country to adapt to. All these themes appear throughout the book, and it becomes an enjoyable experience for the reader thanks to the author’s ability to find humor in personal struggles.

The author’s tone also allows the reader to reflect on the questions and fears explored in the book, with a protagonist in the process of adapting to motherhood and living in a new country: arriving in Buenos Aires in full pregnancy implies not only looking for a place that is suitable for a family but also adapt to the public health system and its bureaucratic processes. Júlia manages to create a mixture of dialogue and internal monologues where she reveals the entire emotional process, fragility and strength in equal parts.

And here is where we see the fascinating aspect of illustrated memories, in the style of the drawing and in the selection of scenes that Júlia chooses to show us, about her passage through each place and about her experience throughout those moments. Capturing the cities through its landscape format allows the author to capture scenes where she can display everything from the tourist more tourist-friendly beauties of the city of Lisbon, to the sad reality of crowds standing in line at dawn to see a doctor in in Buenos Aires’s public hospitals.

I bid farewell until the next installment, hoping that this open invitation will entice you to pick up these books. In a context of confinement that seems to stretch towards infinity, it is worth thinking about yourself in relation to the city you inhabit. Or at least, use reading as a portal to visit other places.