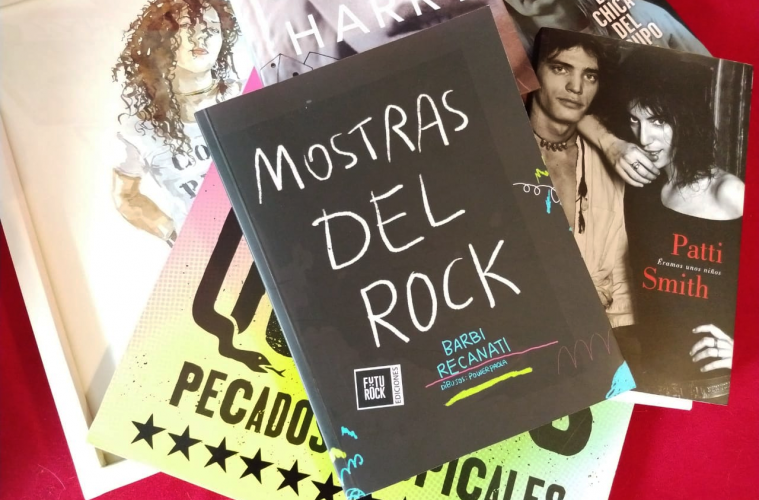 When I was a girl, I wanted to be a bass player. I wasn’t really interested in playing the bass; I wanted was to be part of a band, more specifically a rock band. But the problem was that beyond being in the audience and perhaps in some dressing rooms, girls did not have much presence in that world. And the few that I could see were bassists or background singers. Consequently, I believed that I could only be a bass player, or maybe singer. Those seemed to be the only options.

Some time (and many concerts) later, my best friend Diego gifted me some drumsticks for my 15th birthday, and told me I should learn to play the drums so we could have our band. Did I learn to play the bass or the drums? Of course not. The financial crisis of 2001 thwarted my plans to ask for a drum kit instead of a birthday party or trip to Disney. But beyond this, by that point I had learned that I had the power to do whatever I wanted.

This last Christmas, my mother gifted me the book Mostras del Rock. And here we are.

Mostras del Rock is a book written by Barbi Recanati with illustrations by Powerpaola. You might recognize Barbi from the thousands of recommendations and appearances she’s made on this little site of ours. But if you’ve been living under a rock, let us remind you.

Barbi Recanati is a musician and producer. She used to be the frontwoman of the group Utopians and is currently an amazing solo artist. She is the founder, along with the people of Futurock, of feminist record label Goza. You can also hear her Monday to Friday on national radio on Icupai with Charo Lopez or Thursdays on Futurock. Is Barbi’s collaboration with Futurock one of the most fruitful in the history of Argentine music? We’d dare say it is in the conversation.

In 2018 Futurock asked Barbi to make a podcast about the history of rock, but focusing on the unknown history. That of all those invisible women and marginalized populations that were involved in it. They who paved the way for everything that came after. That podcast later turned into a book, a book with the soul of a fanzine that collects the information from the podcast and turns it into a powerful manifesto along with the incredible illustrations of Powerpaola. (We’re still waiting for our comics guru Lucas to write a full article on Powerpaola’s brilliant Virus Tropical; meanwhile, readers can check out what we wrote about it here)

From Mamie Smith, the first Black woman to record the blues in 1920, to Kristin Hersh, through a long series of important figures of varied popularity. Mini bios that teach us about them, stories and anecdotes that help us understand them. The birth of rock told through its hidden protagonists.

In a full fanzine mode, the stories are written in decidedly untidy handwriting and accompanied by portraits and mini comics. Different illustration styles to give a well-rounded view of these characters. Because this book has a bit of everything: from superstars like Patti Smith and Debbie Harry to less accessible characters like Genesis P-Orridge. And in addition, you get a sticker sheet and additional Powerpaola illustrations.

Mostras del Rock is not a definitive guide, but without a doubt it is a good starting point to arouse curiosity. Because even today it is still difficult for us to find female touchstones; except now we know that when you start to scratch the surface, you’ll find them. Because they were always there. It’s just a matter of looking into the origins of the artists you are into, who inspired them. To look closer, to listen deeper, and to learn.

Because, though some may dislike that Miley Cyrus performs with Joan Jett today, coming off as a contrived gesture, it could possibly ignite a small spark in the hearts of former Hannah Montana stans. The fact that a movie like Netflix’s Moxie would go to the trouble of talking about the Riot Grrrl movement and Bikini Kill could lead to the discovery of Pussy Riot.

Knowing the past to build the future. Mostras del Rock should be required reading for all children who have a propensity for music. Gift it to the kids you know. Be the cool person who teaches them the beauty of music, and use it to in turn to find out more about your own musical DNA.