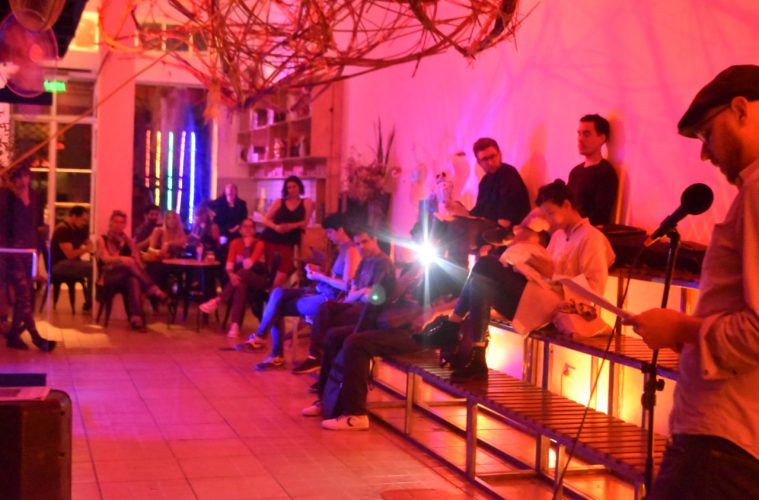 A Moment To Be Witnessed: Bilingual Poetry in Buenos Aires

I had been writing poetry again. It had been years since I had, yet here it was, back again– the way sparks of imagination come to you in form, in structure. It must have been the rhythm of the city, those strange, transitory images that somehow make it all make sense just for that moment. Crossing Libertador at the golden hour, how the light offers a glimpse of the infinite one step from the center of the crosswalk; watching a coypu creep to the lip of the Lago de Regatas, a slight risk on a chilly, solitary evening; the dancers at Plaza Dorrego, hungry-elegance performed for a few distracted foreigners sipping Quilmes; the faded beauty of a peeling Spanish colonial in Colegiales, silence in place of past glory. All scribbled into my notebook while taking breaks from long walks down these sidewalks, which during those first months, reeked of jasmine and verse. But being new here, I had no community with whom to share.

One evening, I stumbled upon First Hand Buenos Aires’ Storytelling Night at Sheikob’s Bagels. This spot, cozy and packed over-full with people munching everything bagels and sipping IPAs, seemed paradoxically ideal for the event, and some of the performances more than impressed. The next time it was held I read something prepared, tweaking the format, smuggling literary bars into loosely-woven vignettes.

From there, I started finding the occasional reading. Through a friend, I met erotic poet Marfa Nekrasova, whose great charm, besides her exquisitely profound and funny work, is her artistic generosity, her desire to connect creative outsiders. She brought me into her community, invited me to events around the city: from dive bars to tango halls; cultural centers to run-down Victorian homes; even cheto rooftops. Along the way, I met wonderful writers like André Demichelis and Brian Dinamo, who invited me to read at events, which they hosted at places like Poe Bar, CDCA, and Strummer Bar. Much of the writing was very good; although, performative, dramatic, intense; fine flavors, all —  just not my cup of mate. Plus, I was writing mostly in English, and it felt odd to read in English, or mostly in English, to Spanish-speaking audiences.

Around this time, I saw that Walrus was hiring teachers. Maybe this would be my opportunity to create a community of writers, in English, or Spanglish. I applied and got the gig. I was going to teach a poetry course.

The first class felt a little intimidating. I had been teaching for years, but to adolescents, not adults who would come in and sit quietly in a tight circle, on mismatched chairs, in this quaint bookshop. I wondered what I had to offer to these folks: a student, a doctor, a graphic designer, a chef, a journalist. I had written a few poems recently and hadn’t published anything since college. My inner-Iago whispered fraud, as I tried to ignore it with a bit of small talk, and waited for the clock to hit 18:00.

However, we seemed to click quickly. It was a thoughtful group who ranged in age from early-twenties to sixties. Folks from all over the world, with varying levels of experience writing, and a wide gap in English proficiency. Turned out that some of the most tentative, with the least grip on English, wrote the most captivating turns of phrase. Turned out everyone was eager to share in the workshops. No-one stopped coming after their piece was critiqued.

In this first group, I met Georgina Tofe (who now puts out a sweet little literary newsletter called Ramal). We decided to create a bilingual poetry and music ciclo at Bar Kowalski called Movimiento Poetic. It was short-lived, but good fun while it lasted. Many from that first class read, or came and supported, at our events.

Since then, I have taught various Walrus courses: one on short stories, another on a novella, one more on Mindfulness. Once I invited a friend to audit a class. He was leaving town and had asked if he could watch one. Afterward, as we sat outside the Independencia subte station, he said, “I loved that you gave space for everyone to talk.” (That’s an old high school teacher trick, one I worried might feel infantilizing to a group of adults, but instead seemed to be the flint that ignited the conversation). “It was lovely to watch,” he continued. “Each time someone would speak, the whole group would listen, and the speaker would light up. It’s like she had come into this bookshop from the non-stop noise and commotion of the city, and found a space where she was finally heard. And you created that space.”

In retrospect, any poetry community created through my courses, or ciclo, was ephemeral. Maybe Buenos Aires didn’t need another literary coffee klatch, at least once the pandemic sent everyone online. A few members of the Mindfulness class started a sangha afterward, but one that was female-only and therefore not an option for me. Still, what I realize from all this is that it wasn’t about that in the end. It was about giving people a place where they were heard, where their opinions about a George Saunders story, Ada Limon poem, or Pema Chodron article mattered. Where they could express their take on philosophical concepts or a character’s psychology. About life. A take, which would be actively considered. An instant, where a small world of fellow critical thinkers turned the spotlight onto them and their ideas. I suppose that this is what Walrus, and courses like it, truly offer their clientele: a moment to be witnessed. And though it is not what I originally thought I was seeking, it is something I feel lucky, in which to have played a role.