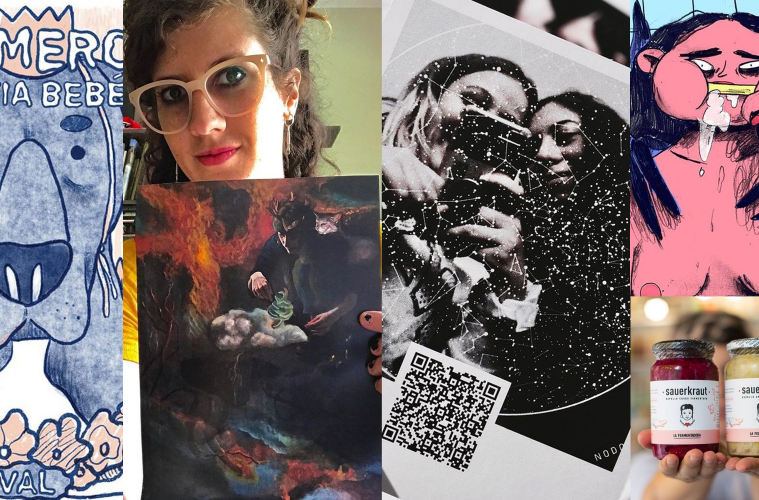 A List of Local Female Creators You Should Know About, pt.2

Welcome to part 2 of La La Lista’s list of female creators you should know about. Just like part one — which, if you haven’t read yet, get on it — this is far from a comprehensive list; rather just a personal selection of female creators we wanted to highlight.

As always, we are presenting each artist’s social media profile for you to follow. Without further ado, here are a few more selections.

Florencia de Giovanni Pacini is a visual artist who specializes in wholly original oil paintings that delve into the female subconscious. In her surreal and gorgeous compositions, she paints women who openly indulge in their carnal impulses, peering under a leafy frond at a nude man bathing, or tearing at fish with their teeth. Sometimes they are enchantresses, musing over sacred texts, or casting incantations with cats and birds and pangolins as familiars. Other times they are lost in pleasure, or gazing past the viewer as they contemplate some unseen entity or thought. No matter what the subject matter — they are mesmerizing. In addition to being an amazing artist, she is also a thoughtful teacher who has been conducting classes during the pandemic for those wanting to begin drawing and painting.

We continue with an example of a musician who illustrates, or an illustrator who makes music, or simply a beautiful person who makes beautiful things. Aili is an artist from Mar del Plata, and Hyperobjecto is the project where she captures her rich, deep and ethereal universe on prints, accessories and other objects. A minimalist style, though very warm and full of symbolism. If I had to name it, I would call it the dimension of introspection. And as you would expect, her music is the sonic equivalent to all these magical elements.

La Fermentadora is a project by local cook Daniela López Camino, specializing in creating artisanal fermented hot sauces, sauerkraut, kimchi, and other spicy creations. Born out of a desire to experiment with other types of spices than what can be commonly be found at the average Argentine dinner table, which led to the creation of small-batch hot sauces such as her yellow jalapeno and mango sauce. She also has a pizza pop-up called FF Pizza which often feature her deliciously spicy experiments. To read more about Daniela’s journey and the ascent of spicy food culture in Argentina, read our feature!

Subversive, confrontational, and often wickedly funny, the work of illustrator Carla Ocho has gathered acclaim all over the Internet and real life. Her work explores unabashed desire and a kind of joyous nihilism in the face of life’s fickle capriciousness. She brings cartoonish and fantastical elements to depictions of day-to-day life, such as in her episodic series Inframundo. One of our favorite illustrators in recent memory.

Sofía Churruarin is a professional photographer and math teacher, something that is quite clear when we find that her works easily meet the golden ratio. She brings her passion for botany to her project Madre Selva, creating miniature gardens and gorgeous nature scenes. These incredible, elaborate, painstakingly created miniature landscapes are among the most unique works of art we’ve ever stumbled upon. To learn more about Sofía and her work, check out our interview with her.

Nodo is an art project and service created by Cami Arrigo and Melanie Griecco. The pair started creating Polaroid-style pictures on demand, as well as star maps based on how the skies looked on your date of birth. Whether or not you assign any special meaning to the positions of stars when you were born, it’s still pretty cool to look at. Their stylish products make for great home decor, and their work has attracted the attention of local influencers.

In the constantly expanding universe of local illustrators and comic-makers, if we have a special occasion to highlight a name that represents a collective, I can think of no better choice than In Bocca al Lupo: this editorial collective made up of Daniela Arias, Romina Fretes and Val Reynoso has been operational since 2012 not only as the publishing house of the work of the 3 authors, but also as the driving force behind the beautiful independent PIBAS anthology. Apart from being publishers, they have been a constant presence in comic fairs and events (often organizing them!) as well as a point of reference and networking for feminist and feminist independent work in local comics.