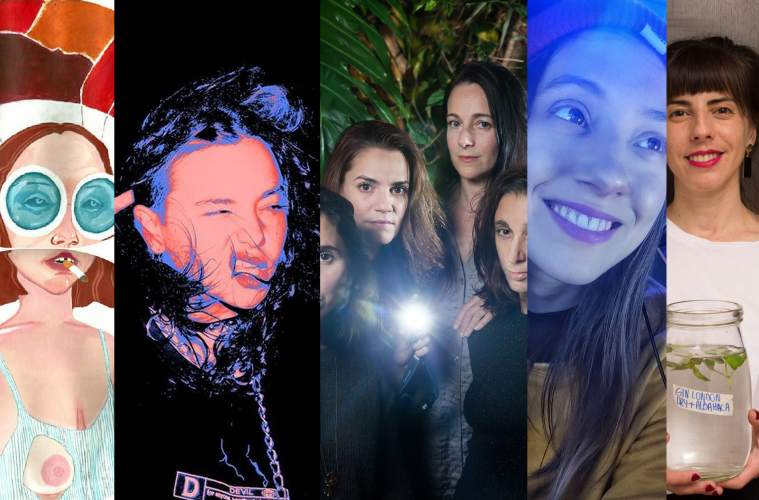 A List of Local Female Creators You Should Know About, pt.1

In honor of Women’s History Month, here at La La Lista we’ve been focusing on highlighting the work of the women in the local scene that we admire (check out our playlist featuring all the female solo and female-fronted bands we’ve featured over the last year).

For this reason, we asked each member of our staff to pick one female creator (of any medium aside from music) for us to highlight in a two-part series. Is this a comprehensive list? Heck no, this list would be hundreds of times longer. But this is a list of women we appreciate, making art you should know about.

Watch this space for part 2 coming later this month!

A self-described “bartender and yogini,” Pipi Yalour is a Cordoba native that is changing the game for women in the business of cocteleria. At heart she is an educator and she’s combined her passion for cocktails and her knowledge of teaching to create Chicas Barra, a weekly newsletter and blog where she shares her recipes, workshops for female bartenders (at affordable prices) and her travels that inspire her work. It ain’t easy working in the gastronomy industry with it’s long hours, high pressure environments and usually not so great pay. Combine that with being female and you got yourself a challenge, but nothing that you can’t face when you know you’re fighting for the rights of all of the other women in the industry standing by you side. Pipi has created a community for barmaids to learn, grow and command their space behind the bar in Argentina and beyond.

Over the last few years, I’ve watched Menke grow her Instagram from a couple hundred followers to almost 30 thousand. In awe, I’ve watched her hone her craft, target her audience, and figure out how to profit off her artistry. In a rapidly-expanding cyberworld where there’s no clear path towards “making it,” she has managed to keep her finger on the pulse, steadily creating original content, learning, and developing her aesthetic. I’ve seen her deal gracefully and publicly with the ups and downs of managing online self-image, self-love, and the decreasingly far-out concept of authenticity on social media. From cyberpunk-inspired fashion and makeup looks, to music videos, to the hundreds of beautiful and incredibly popular filters she has created, to the clickable, shareable, inspirational, and lovable designs she’s been putting out most recently — Menke is one of our favorite emerging Generation Z digital artists, and definitely someone to keep an eye on.

Sara Salazar is a visual artist going by the name of Saratuaila on Instagram. Her paintings and drawings have a completely distinct and raw aesthetic that uses watercolor to celebrate the nature of women’s bodies. She also does a variety of goodies such as earrings and quirky ashtrays that are just delightful.

Multiplatform comedy talent Celeste Kun Sabo kept creeping into my Insta “Discover” feed and within seconds it made sense to follow this cheeky and cheerful comedian. More recently her fanbase has been growing through IG and Tiktok which coupled with the throes of quarantine has seen her provide some light hearted fun to many an Argentine in desperate need of a giggle. Despite being a mother of three it seems her sense of humor hasn’t taken a hit; if anything, it’s made her stronger. In 2020 Celeste became a resident at the Taburete Comedy Club and in 2021 secured a spot presenting alongside big local talent Dalia Gutmann. Although our lived experiences are vastly different,  what I love about Celeste is she doesn’t try to sugarcoat the realities of parenthood; she takes shots at those who do by defying these expectations all while staying relatable.

Elisa Carricajo, Valeria Correa, Piar Gamboa and Laura Paredes are the four great minds behind the monster Piel de Lava. Actresses, writers and directors. I discovered them thanks to the magical lens of Mariano Llinas in La Flor, an epic cinematic declaration of love to film and to them, the performers. Watching each one of them in separate scenes is a pleasure, but seeing them together… well, that’s a whole other thing. Piel de Lava as a unit is a perfectly oiled and effective machine. When they are on stage, they bring us closer to a rock concert than to a theater play. Part of me regrets not having the opportunity to see more of the work they wrote, directed and performed in. But when I read the texts, I can picture them performing in my mind. And if I get too nostalgic, at least, by the end of the month, I can go to the theater and see their play Petróleo for the fourth time (currently on its fourth season at Met Sura theater).

For those of us who struggle with understanding basic concepts, sometimes a simple explanation using cute illustrations of cats will help us out. Te Lo Explico Con Gatitos is a project by UI designer and web developer Bel Rey, who also happens to share a passion for our furry feline friends. Using cats as an illustrative tool, she creates infographics on Instagram that explain all manner of things, often with a focus on the world of programming. And for those of us who have no clue about any of that, it is an illuminating read — not to mention extremely cute.

The amazingly talented and diverse group in charge of organizing Nosotras Movemos al Mundo is an inspiring bunch. Spanning four whole days of multidisciplinary arts including music, dancing, and reading, NMM was an artistic endeavor of women and non-binary organizers with the aim of displaying just how rich and in-depth our scene is when diversity is encouraged and celebrated in all styles and disciplines. Rather than singling out a specific réalisateur, a project of such a huge scale deserves a collective standing ovation from anyone who cherishes art in all its iterations.

All 4 days of Nosotras Movemos al Mundo at the CCK can be found here.