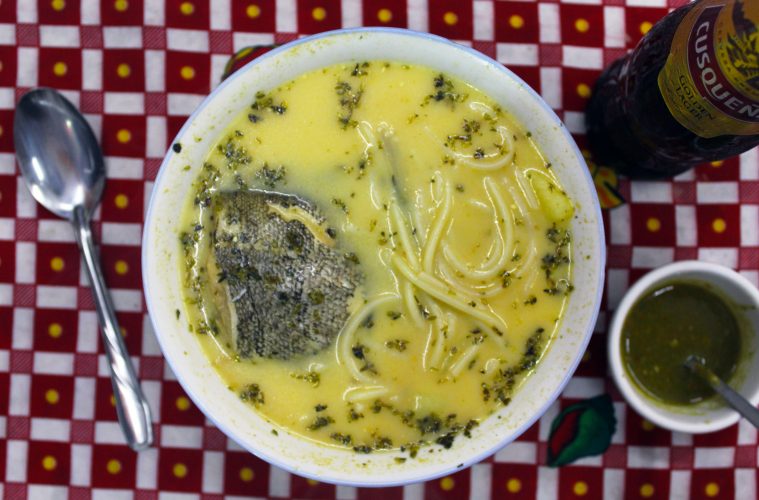 Seco de carne is a powerful dish, almost omnipotent. It is cooked to fill your gut to the point of explosion. The rest is a choose-your-own-adventure: opt for mid-day winter hibernation or go build a house.

It is the result of hours of braising that pulls the slow juice and fat from the chosen meat and paints a muddied buttery sauce. Although stews are typically the most novice of preparations, the seco is a special beast. Pull the meat too early and it’s left tough and fibrous—the punch of heat makes the tissue hug itself. The veins and fibers retract and the bite is tough. Let it rest for too long and, rather than plucking off tender strings of juicy goodness, it falls apart into a textureless mush.

At Mi Chiclayanita on a forgotten corner in La Paternal, the seco rests comfortably in the middle. Owner and head chef, Teresa Hernandez, has spent the last twelve years re-creating flavors from her native Chiclayo, a sub-tropical city in Peru’s northeast.

At night, Hernandez mostly works alone; during the day an assistant or her daughter helps out. Her fingers are dressed in a half dozen silver rings and are the only hands allowed in the kitchen. This isn’t her mandate, necessarily. Regulars have been known to wait for hours on end for her to return to the shop before letting someone else prepare their ceviche. She is a natural matriarch, mi corazón slides off her tongue with the saccharine sweetness of a chicha morada.

Her seco is prepared with goat’s meat rather than the preferred beef tenderloin. The meat is dense and hearty. It is served, as by law, with a sturdy bed of white rice and soft kidney beans that simmer in fat and salt mashed to butter with flutters of cumin and other spices. Her sauce is similar to a Mexican mole in dimension. It is layered and complicated with a dozen or more ingredients. Everyone plays together nicely; no single element fights to be heard over the other.

There is an earthy savory spice I have never tasted before in a seco. A fragile sweetness rests so far on the periphery of your tongue that if you don’t pause for a moment to enjoy it, it’ll slide across the palate unnoticed. Marjoram, maybe?

Other dishes from her native city include tortilla de raya, a hashbrown-omelette hybrid that apparently can only be found here. Raya is a saltwater stingray found in the warm waters off the Peruvian coast. In the north, it is dried on roof tops underneath the hot tropical sunlight. The meat is sliced into matchsticks and folded into the tortilla. You are encouraged to spoon on a chunky green rocoto sauce. The hot sauce vibrates in the mouth, growing quietly as it touches the back of the throat and punches you with a hit of lemon.

For a cold winter day, order a chupe de pescado. A creamy yellow broth textured with evaporated milk and, probably, a spoonful of butter, is filled with soft strings of noodle and grilled fish. The noodles appear to be finished off in the soup; they miraculously hold their structure. The fish is served with skin and bone. Eating around the tiny bones along the spine is a challenge in and of itself, and even more so when packed into a soup bowl. Here, it makes you slow down and enjoy the nearly lost flavors of a far away homeland.

Hours: Monday through Saturday noon to 4:30pm and 6pm to 10pm