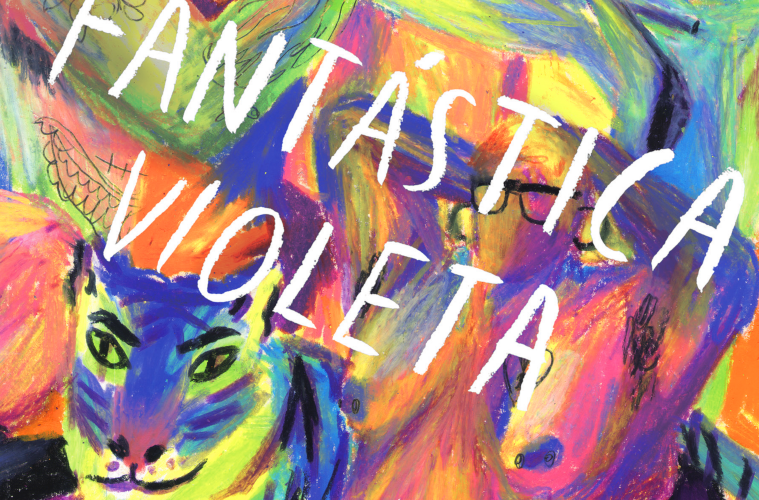 Welcome back to La La Lista’s column dedicated to celebrating Argentine independent comics! On this occasion, March is the month where we focus on feminist creations and expressions across various media. As we have already seen in past installments, the Argentine independent comic (luckily) is a scene with a steadily growing presence of creations made by women, with a feminist and intersectional approach.

Just in time for the occasion, Fantástica Violeta came into my hands, an anthology published at the end of 2020 that arose as a result of the collaboration between the publishing house Maten al Mensajero, which for years has maintained an interest in independent comics, and LatFem, a feminist journalism agency operating out of Argentina but covering news throughout the Latin American and Caribbean region since 2017. These two entities joined forces with the purpose of creating an anthology of illustrated stories with a feminist approach, for which they selected 10 works via a team made up of Kiti López (LatFem official illustrator), Elizabeth Lerner (Maten al Mensajero editor) and Jazmín Varela as guest illustrator (and cover artist).

The first thing that jumps out when reading all the stories that make up Fantástica Violeta is the commitment of each author with the focus of the publication. Beyond the fact that many anthologies feature a thematic core uniting all the stories, this book takes it a step further: the personal link between the author and the topic that they choose to address in his story is easily evident. Regardless of whether it is an autobiographical story or a fantastic fable, in each one of them one can perceive that inspiration is strongly tied to questions, celebrations, or personal ruminations regarding sexuality, the role of women, and the hegemonic impositions on the female body.

It is on this notion of the body as a discursive battlefield where some authors present their weapons, willing to uproot the rituals that are disguised as daily life and plague the role of women in society: Gorda (Malena Guerrero illustrating a script by Alejandra Benz) raises a battle cry that transforms the guilt and hatred generated by fatphobia into an exclamation of bodily sovereignty. Tatuaje (Paula Sosa Holt) and Las Tetas de Mamá Vaca (Titihoon) serve as personal testimonies that celebrate one’s own body and what one makes of it, while in Afuera es Carnaval (Lucía Vera illustrating a script by Paula Ferraro) and Odisea en el Orgasmo (Estrella Mergá) the desire and erotic potential generated by a person’s relationship with their sexuality is explored unabashedly.

Interesting relationships also appear between different stories and their themes. In La Nona (Angie Cornejo) we explore the protagonist’s impression of her grandmother, contemplating her role as a reinforcer of the silent pacts that sustain the patriarchy while still recognizing her positive influence on her life. Meanwhile, Soñar el Género (Rouse) explores a beautiful dream ritual involving a girl and her grandmother, based on Yuma society and its non-gender hierarchical social organization.

La Entrega Final (Juana de Marco) is unflinching in its exploration of the representation of the female body in advertisements and the role (between accomplice and martyr) of those who have to produce graphic pieces and perpetuate those hegemonic features, while Felicidades Señorita (Pinesca) employs a child’s gaze to contrast the personal trauma with the social significance for adults of a girl’s first menstruation. Finally, Identidad baiamor (Julian Gabriel) builds a mutant fable that functions as a break from binarism and a fantastic exploration of gender transition.

As with any anthology, Fantástica Violeta is not intended to be to the liking of the reader in its entirety. There will always be some contributions that resonate more with some readers, and it is difficult not to judge them on a metric of personal taste. Visually, there are many different voices and stylistic approaches. But though you could judge them based on their level of proficiency, highlighting some cases where there seems to be more professionalism or a more trained line than in others, there’s value in a selection approach that presents a wide range of visual styles, from the most elaborate to the most rudimentary.

This, ultimately, serves to celebrate freedom in the act of drawing and building a personal story with the tools at our disposal to tell the truths that we carry within us, as well as inviting more people to partake in it with their own way of approaching the medium. Regarding this celebration, it is impossible for me to close this article without making mention of a momentous occasion that happened recently: the ten-year anniversary of the publication of Virus Tropical by author PowerPaola.

On Instagram, the impact that this foundational work left on an entire generation of illustrators was celebrated under the hashtag #virustropical10anios, sharing personal testimonies about their reading of the book and sharing the indelible mark it left for posterity.

Thus, in recent days, comics authors whom we’ve reviewed in this space such as Sole Otero, Delius, Titihoon, Camila Torre Notari and Mariana Ruiz Johnson have all shared illustrations for the occasion along with beautiful testimonies about reading that book for the first time.

Virus Tropical is an autobiographical story by the author, who was born in Ecuador but lived in Colombia (Medellín) for a large part of her childhood and adolescence, a period covered in this work. It began as a series uploaded around 2010-2011 on the Argentine comics blog Historietas Reales. Not only was it a milestone on the site and a big bang within Latin American comics, but it also functioned as the spark that invited many young people to share their experiences through drawing, inspired by the freedom and dispossession of PowerPaola’s style. In each and every one of the posts that were made in celebration, you can see the seed that she planted and the barriers that she broke down in those people who since then felt less fearful and more encouraged to narrate in graphic format.

PowerPaola was not only an influential figure in her work, but she also generated bonds of sisterhood between comics authors, both as a founding member of the international collective Chicks on Comics (of which I fondly remember their exhibition at the PROA long distance relationship) and as a participant in the meetings of illustrators at the Varela Varelita in Palermo. Paola has been a shining beacon, and with her stories she has managed to inspire and open pathways within this medium. In a scene where the predominantly masculine gaze has kept non-hegemonic visions in the margins, it’s important to celebrate the anniversary of a work that came to impose new rules.

To put a bow on this celebration, I leave you an excerpt from the most beautiful dedication I read about this anniversary, in a post by critic Pablo Turnes:

“It’s not often that I find something that I know I’m going to love forever, but with Virus Tropical it was love at first sight. Few stories have touched me like this. For a comic book reader trained in ideas of classicism and avant-garde within expected canons, what @powerpaola was doing was completely disruptive. You didn’t really know where that story was going (do stories go anywhere?); what mattered was the process of telling it, entering the narrative and feeling transformed. In other words, after Virus Tropical I was no longer the same reader or the same person. It may sound like an exaggeration, but everyone finds change where they can. I was lucky: I found it in the comics. “

In an unprecedented move for this column, and deeply affected by these days of recalling the work of PowerPaola, I will spoil the fact that next month’s column will feature Virus Tropical as one of the three works to be analyzed and reviewed. The common thread? Well … I’m not going to tell you everything. Find out on the next Ltd Edition. And now I say goodbye, hoping that you too find a comic that will alter you forever, and for the better.