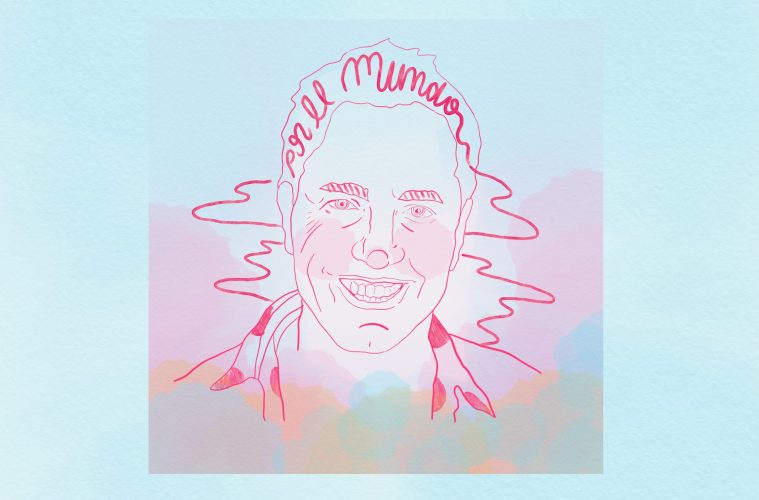 Marley & Me | Explaining the Most Endearing Host on Argentine TV

What comes to mind when I say the name “Marley”? Reggae? Alfajores? A movie about a dead dog? That’s not what we’re covering today. Today we are going to talk about the life of times of Alejandro Wiebe, better known as Marley. The best television host of all, and one of the most widely beloved people in Argentine entertainment.

It’s hard for me to think of television without automatically thinking of Marley. Since I’ve been researching this piece, my pre-existing fandom, which was already pretty intense, reached unheard-of levels. Cady Heron levels of obsession. Maybe if Marley grew his hair long he would look like Regina George… (this is a Mean Girls reference).

Alejandro’s career began in the late eighties, when he worked as a crew member for Susana Giménez while employed by a radio station. Then in 1991 he started working at FAX, the variety and current affairs program hosted by Nicolás Repetto. In fact, it was Nico himself who first called Alejandro “Marley,” all because of a report that Marley, the TV host, made about Bob Marley, the musician.

That was Marley’s expertise. Reports on movies, music, and celebrities. Because of my age, I don’t really remember anything about FAX (is there a more 90s and Menemist title for a TV show?), but I do remember the next program he worked on. 360: Todo Para Ver, the first program that had a segment in 3D! You know, the kind of 3D that you had to wear cardboard glasses with blue and red lenses to see.

Marley became “the celebrities guy.” He interviewed everyone. National celebrities, international celebrities, legendary acts, emerging artists… they all chatted with Marley. Not just during his time at 360; this role led to his participation in a lot of Argentine TV programs that contained the words “tele” and “show” in their titles, all airing on channel 13.

In 2002, Marley decided to shake things up and leave channel 13 to become part of Telefe. There he hosted a program called Mundo Show, and also another show that might sound familiar because it’s still on the air today: Por el Mundo. A program consisting of Marley traveling around the world along with different Argentine celebrities to see tourist destinations, eat weird foods and do dangerous things.

And I’m going to stop right here for a moment. I think this was the point where Marley’s life changed forever. Not only did his travels become something legendary, but also Por el Mundo showed us much more about Marley and his guests. Being able to see celebrities being complete idiots is a pleasure that nobody should pass up. He was also living out the audience’s wildest dreams. Think about it: they were paying him to travel the world making friends with famous people. Anyone who speaks ill of Marley clearly does so out of sheer envy.

After Por El Mundo came another big turning point in Marley’s career and personal life. His Switzerland trip with Flor Peña was so successful that they ended up hosting a show together. A show that dealt with nothingness itself and everything at the same time (in the absurd, Todo x 2 Pesos style). It was Marley and Flor Peña just goofing off, making up skits, coming up with made-up musicals and laughing a lot on the air — doesn’t it sound like a dream to get paid to just goof off on the air with your best friend? This friendship is one of the most beautiful things to come out of Marley’s career. Even today, when Marley and Flor get together they’re a massive ratings hit. People just love them. Their children, though… that’s another story. We’ll get to that in a minute.

In short, Marley became one of the biggest stars of the channel. 18 years and counting, where he’s hosted more than twenty different shows. He hosted specials, awards shows, and even had the luxury of replacing Susana on her legendary show. He was in charge of putting a local stamp on a lot of imported formats. From La Voz, through El Muro Infernal, Minuto Para Ganar, Operación Triunfo, The Wall, Celebrity Splash, and my favorite show of all time, Tu Cara Me Suena. I’m going to take a minute now to talk about this show.

Tu Cara Me Suena is a show that consists of local celebrities imitating other famous people and in turn having a panel of celebrities give them scores. What can I say? It was a delight. It was like being at a wedding at four in the morning when we are all drunk. But on TV, with a bunch of celebrities, and with an impressive display of production. At this point I think it’s pretty clear that I really enjoy television.

And just as I used to go to attend the Todo x2P shoot (and also dance at the opening of season three) I also attended some recordings of Tu Cara Me Suena. I really don’t know if all of you are as passionate about the audiovisual world as I am, but my wish for you is that you get to see your favorite show recorded live. I loved Tu Cara Me Suena so much that I even used it as the theme for one of my best birthday celebrations.

My other favorite Marley show was Dueños de la Cocina, because it brought my love for Marley together with my passion for food. This format was beautiful: lots of great chefs competing to win their own restaurant. They chose people from the public to taste the food and also meet Marley. I was never chosen. That program also featured one of the Totake brothers (current owners of Mirutaki, one of our favorite restaurants). Food and Marley. A winning combination.

Continuing our chronological journey, we get to the year 2017. Maintaining a very private private life for several years (we only met one famous girlfriend, Rocío Marengo, current wife of Ricardo Fort’s brother), Marley had been expressing for many years his desire to be a father. “Married or single. By natural means, adoption or by surrogacy, ”he told gossip magazines. So when Marley announced that he was indeed going to be a dad, audiences erupted in everything from joy to confusion to a whole lot of judgment.

I truly believe that as a society we are not ready to have a serious, non-judgmental talk on topics like the desire to be a parent vs. wanting a family vs. the desire to breed vs. the possibility of adopting. I think it’s a topic we’re not quite ready to deal with honestly and maturely. Even so, my position on this is and will always be “I’m not going to tell anyone how to live their life.” For this reason, the arrival of Mirko Wiebe to the world was a source of happiness for me.

Mirko has been growing up right before our eyes. We saw him in the womb, when he was born, his first porridge in the arms of Lali Esposito in Hong Kong, the first time he said “pa” in Berlin… Mirko has already seen more countries than all of us put together. He met Maradona, the Pope, Messi and even Obama. Even so, the most beautiful moments are when we can spy on his everyday life, and we see that Marley and Mirko are just a regular family that does regular family things. They take walks, they attend Zoom classes, and they hang out with family and friends.

Here we return to the topic of Flor Peña. Because Flor had a kid of her own around the same time that Marley did. And though you might immediately assume that their children would be as close as their parents are… that’s not the case. The heart wants what the heart wants, and Felipe (Flor’s son) and Mirko definitely don’t love each other. As babies they even seemed to hate each other.

Something else that I really like about Marley is how, from his place of absolute clumsiness and ignorance, he also became a spokesperson for science. Not with one, but two programs. Back when he hosted his variety show La Nave de Marley he would do science experiments such as when they filled a pool with water and cornstarch – a pool of non-Newtonian liquid. It was like quicksand and it lasted for only a week because it began to rot, filling the entire set with a horrible stench. They did segments on electricity, chemical reactions, force, and resistance. All with the supervision of “scientists” whose entire job was to ensure that no one died or was badly injured.

A few years later, National Geographic hired him to host La Ciencia de lo Absurdo, a show that used viral videos of bloopers to examine the science of what was happening. Not bad for goofy Marley.

In short, I genuinely admire Marley. To me, he seems like a person who has worked all his life towards what he wants, both in his professional and in his private life. A person who turned his “silliness” into profit. A person who is not afraid of ridicule.

But above all things, he knows people like him. Not just the public but also his colleagues. I think TV is not such a bad place as long as Marley is still there.