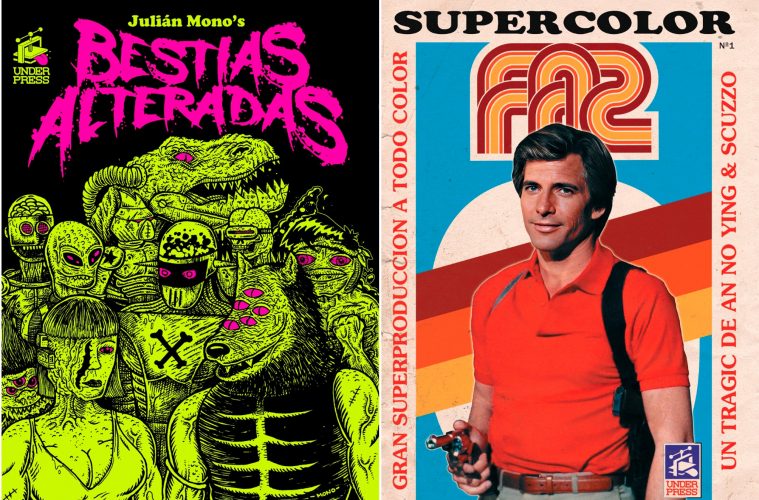 Welcome back to Ltd Edition, in the shortest month of the year. My two hopes for summer are always the same: that we don’t have too many days that are over of 30°C, and that we have fresh new material to read that’ll whisk us away to faraway lands. Luckily this year kicked off with some excellent fanzine material that I’m happy to share with you.

Usually, in this column we cover comic books and collections that highlight the capacities of the comic format to serve as an intimate diary, as illustrated poetry, a field of artistic exploration, or as a medium where a nouvelle can be developed. But I feel like that would be telling only half the story, leaving out to the comedic, whimsical, and more urgent side of print fanzine culture. Collective efforts resulting in publications that are far from the ramshackle, rudimentary quality of material and content that one might associate with fanzines. Therefore, today we are highlighting two excellent publications that came to light during the summer and that I enjoyed reading as I tried my best to combat the suffocating Buenos Aires summer.

In December, the label Underpress Editora released two brief publications: Faz, with drawings by Scuzzo and a script by An No Ying, and Bestias Alteradas, written and illustrated by Julian Mono. This project is led by Scuzzo himself, whom I first stumbled upon in the fanzines-and-comics-events scene as the designer of some incredible T-shirts that humorously revisit the pop-culture universe of TV shows, video games and movies that defined the childhood of the millennial generation. Since 2017, he has added to his work in clothing and sticker design with a series of fanzines published in A5 size.

In this new work — with a script by the mysterious author known as An No Ying — he revisits the origins of TV’s The A Team, through the eyes of the person who inspired the character of Lieutenant Templeton Peck, better known as Faz. Scuzzo uses the seminal 1980s TV show as the framework to build a tragic and comedic story, serving as a kind of testimonial origin story; apparently the concept of the TV show arose from a meeting between TV producer Stephen Cannell and an old, toothless lieutenant Peck, wandering through the streets.

The fanzine uses this premise to imagine a tragic life story where it is difficult not to laugh as we see the evils that befall the most handsome and charismatic member of the A Team. Scuzzo is not satisfied with merely paying homage the TV show and pairing it with pitch-black humor; he expands on this with each page, with various winks and nods to various television characters from the last several decades appearing in unexpected places.

What Scuzzo does in Faz could be called “Comic Shanzhai”, borrowing a term from the most ardent philosopher of the 21st century. Not only is the work a parody/homage that challenges the ideas and characters of the work it spoofs, but its format also works as a parody/homage to the old concept of a comic magazine itself. Scuzzo includes pages of fake ads, appropriating the fonts and advertising styles of magazines that were sold in the newsstands in the 70s and 80s, to make fun of the ridiculous ads that were pushed to readers at the time, such as old programming courses or pressuring readers to become police officers due to lack of formal education. As a result, this fanzine thrives at being a product with extreme attention to detail and print quality, as well as almost perfectly simulating the cheap old magazines with sepia-colored pages and full-page advertisements of yesteryear.

Bestias Alteradas comes from the title of a cult video game from the 80s. The imagination of Mar del Plata’s Julian Mono brings us 28 pages full of mutants, visceral violence, killer robots, mythological creatures and giant sentient turds. The author, who had published the fanzine Muere, Turista, Muere in 2017, once again creates scenes that are as violent as they are comedic, a cavalcade of atrocities that feel like comedy sketches with sudden action scenes.

The fanzine consists of two stories: El Regalo Prometido and El Monstruo (the latter includes the participation of Watkins in the script). Although both stories depict senseless destruction, a closer reading reveals certain universal themes: the difficulty of a father to please his daughter, or the existential question of indiscriminate killing. But the intention is not to get very philosophical; at the end of the day, the goal is to laugh uproariously at the jokes and the drawings, right?

Ultimately, none of that would be enjoyable if it weren’t for a beautifully illustrated fanzine, with thick lines and a handling of blacks reminiscent of another great Mar del Plata graphic humorist Gustavo Sala, but paired with the unhinged and ultraviolent Johnny Ryan from Prison Pit. In Bestias Alteradas there is barely any room to breathe: the punches come strong and quickly, guts fly out and blood soaks through each of the fanzine’s 28 pages. When you finish it, you’ll be thirsty for more of its merciless vengeance.

Ideally, one could find these publications by attending a local fanzine and comic fair, but in the face of social distancing the only way to obtain it is through Scuzzo’s online store. You can buy Faz, Bestias Alteradas, or a bundle with both zines.