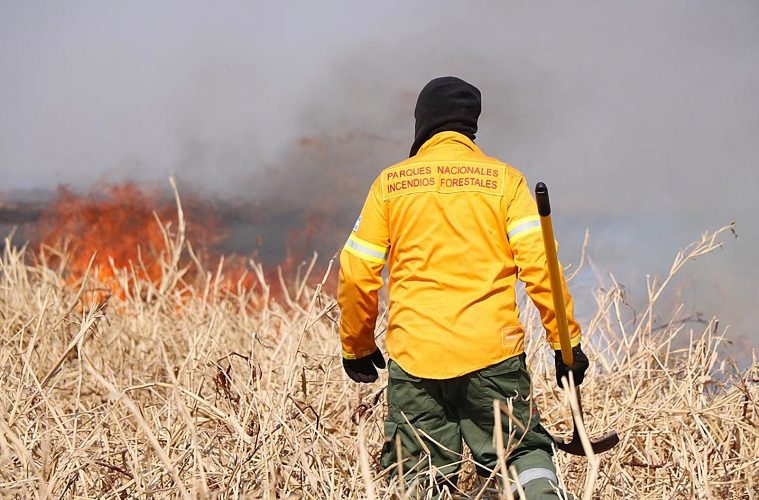 It might feel like ages ago, but try to think back to this time last year, about six weeks B.C. (Before Covid, or at least before it upended our everyday lives).

When the magnitude of the public health crisis we’d be facing was still unknown, there was a different disaster dominating the news cycle; Australia was in flames, undergoing its worst bushfire season on record. While New South Wales and Victoria were in everyone’s thoughts, trouble was brewing closer to home in Victoria, Entre Ríos. Fires started popping up in the delta during a drought, when the water level of the Paraná River was at its lowest point in decades.

In the end, Australia wouldn’t be the only country with a record-breaking fire season. Argentina finished the year with over a million hectares burned. In the period from January to September, about 330,000 hectares were scorched in the Paraná Delta and islands, according to a government report.

If you saw hashtags demanding a #LeydeHumedales floating around but never got around to seeing what it was all about, or what came of it, read on.

First of all, what constitutes a wetland? Put simply, they’re ecosystems defined by the presence of water, where the land is flooded seasonally or all year round. The expansive Río de la Plata Basin, which includes the city of Buenos Aires and extends beyond Argentina’s northern border, is the country’s principal wetlands region. The vast floodplains of the Paraná River can be found here, along with swamps, marshes and estuaries. Patagonian glacial lakes and the shallow lagoons that spot the plains of La Pampa are also wetlands. When they’re all accounted for, they make up just over a fifth of Argentine territory, and experts emphasize the critical ecological functions they serve, from purifying water to mitigating floods and acting as carbon sinks and cradles of biodiversity. (And that’s without mentioning the social, cultural, and economic importance of wetlands to the people living next to them.)

People care about their wetlands for good reason, and they didn’t take it sitting down when smoke filled the air in their hometowns, causing respiratory problems and serving as a constant reminder of the destruction going on around them. After all, the fires weren’t inevitable acts of nature. The national fire service estimates that 95% of the blazes were human-caused. Sometimes negligence is to blame — people doing the exact things Smokey Bear advised against, like chucking lit cigarette butts. But fires are also frequently lit on purpose.

Farmers burn pasture intentionally for various reasons, primarily to encourage the subsequent regrowth of grasses for cattle grazing. This CONICET report explains the negative effects of the practice on water quality, biodiversity and human health. And, of course, when fires are lit during a drought, they burn out of control. In June, the governments of Entre Ríos and Santa Fe prohibited all burning for 180 days, but new fires still started, and activists complained that the rules weren’t well enforced. Environmental groups are also suspicious of other industries that stand to benefit when lands are cleared, like the real estate and mining industries.

Really, the push to protect wetlands isn’t new; the destruction last year just sparked new urgency in an old fight. The Senate even passed wetlands bills in 2013 and 2016, but due to lobbying from the agricultural industry and a lack of political interest, neither made it through the House of Reps. The Ley General del Ambiente (2002) is meant to set minimum federal standards of wildlife preservation and sustainable development, and that’s the idea behind the wetlands law, to set a minimum level of protection that applies to wetlands from Jujuy to Tierra del Fuego. In this interview, Ana Di Pangracio, director of the Fundacion Ambiente y Recursos Naturales (FARN), describes it as “un piso mínimo” that provinces can complement with stricter regulations if they choose. Elements of the potential law, that advocates deem indispensable, include the completion of a national inventory of wetlands, funds designated for their protection, and a moratorium on any new development until the criteria of sustainable use for different wetlands is established.

Throughout the year, people spread awareness about the wetlands crisis in the virtual realm and in the streets. Thousands marched to the Rosario-Victoria bridge on August 1st, which is Pachamama Day. On other occasions, protestors cut off traffic and held camp-outs on the bridge. Twitter campaigns, aka “twitazos,” were carried out. On August 5th, a commission of the House of Reps started to debate various wetlands bills, the same day smoke from the fires reached Buenos Aires.

On November 20th, an array of socio-environmental groups met with members of congress to deliver a petition with over 600,000 signatures in favor of a wetlands law. That day, the Recursos Naturales y Ambiente Humano commission approved a unified text, a synthesis of several different proposed bills. Jóvenes Por El Clima launched a campaign to make it to a million signatures.

If you read the title of this article, you probably realized that the story isn’t over. Last year didn’t end with a wetlands law on the books as activists hoped it would. The bill still needs to go through several other commissions before being debated on the floor of the House and then, if passed, in the Senate. Environmental groups called for it to be discussed in the extended sessions taking place in Congress until the end of February, but it is absent from the agenda. Advocates know that if the law isn’t to be doomed like ones from years past, they have to keep the momentum going and the pressure on.

You can sign the petition in favor of a wetlands law here.

I leave you with a short documentary by FARN about the wetland oasis that lies just outside CABA.