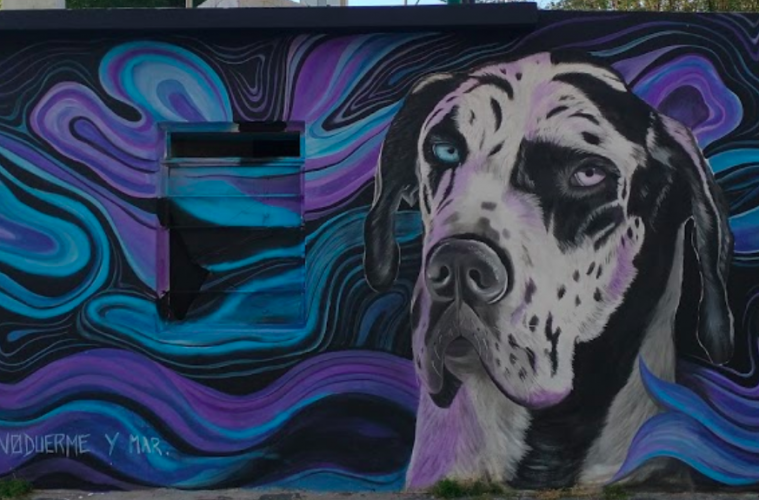 Interview | Searching for Walls With Muralist Taty No Duerme

When I met Taty No Duerme in Necochea, she was on a quest for a nice wall. She’d been riding around the city on her bike, snapping photos of viable candidates upon which she could potentially take out some of her manija.

She ended up selecting the wall of a small utility building in the Plaza San Martín, the central plaza of Necochea’s beachside downtown area, commonly referred to as La Plaza de los Artesanos, because of the stands where every day, dozens of local artisan craftspeople sell their products. On summer nights, it’s also home to several different circus shows, as well as live street music. And now, added to the plaza’s many charms, is the giant face of a great dane, with an inexplicably expressive look in its eyes.

She had asked permission from the artisans, who gave her the go-ahead. This wasn’t a commissioned piece, but rather, a labor of love. With help from a friend who assisted in filling in the background, the painting took all of two or three days. I arrived as Taty was adding the finishing touches. There were several people gathered around, watching her work. Passersby would stop to watch the artist and the mural in progress, some would ask questions, make jokes, or offer words of appreciation, all adding to the pleasant cacophony of the plaza on a hot summer night. I wanted to know more about Taty and her journey as a muralist, so we met up a few nights later for an interview.

As a little kid. My mom is an artist, so she always let me express myself freely through drawing. In school, teachers always remarked at how I would always draw in all the margins, I drew lots of decorations in my notebooks, I drew on the desks and everything.

Then, as I got older I stopped, as a teenager I went through a phase where I was more, well [laughs], into other things. But when I was 18, I think, I started making stencils. I would take an exacto knife and x-rays and cut out drawings, band logos, I listened to a lot of punk music in those days, I was really into going to shows and all that. And stencils were something that caught my eye. I would see them a lot in the streets, and throughout the music scene, so I think that’s what compelled me to start stenciling. And I would stencil t-shirts, patches, on the city walls with friends, and it was all kind of experimental, like, we would go out to paint and just see where that would take us.

And then, even more so, murals. They also started to catch my eye a lot in my neighborhood, I was living in Palermo at that time. And what caught my attention was the size, the immensity, the colors, and the expression. I liked the bigness, and not being closed up in my house drawing, but rather, sharing it with other people, and then those people have a different interpretation, which is nice.

When did you do your first mural?

It was in 2014. My brother said to me one day, “Hey, why don’t you paint my terrace?” Cause at that point in time the wall was empty, white, and I was kind of scared in a way, because I saw it as a responsibility, but I mean, it’s my brother, so I went for it.

I was in a phase at that time where I was doing lots of like, circles and hoops, mandalas, psychedelic drawings, I liked to make things with a sort of formlessness, because it wasn’t like, something figurative, but more like a sort of internal expression of just…making colors and…flashing.

I painted a mandala and a bunch of weird plants. Nowadays when I see it I think “ugh, how terrible,” but it was a nice exploration. That was the first, in 2014, so it’s been 7 years now that I’ve been painting walls.

How did you start getting gigs doing murals?

There was a period of boom for bars and breweries in 2016 and ’17, and I started getting offered gigs, and I was like “Holy shit! They’re paying me for this!” And I realized that it was possible to work doing other things, not just something that I didn’t like. During that time I was working in offices, but I would spend all my free time drawing anyway.

I was pretty stoked about the gigs I was getting, even if the subject matter wasn’t what I necessarily felt drawn to. My first paid gig was painting Lemmy, the singer of Motorhead, in a bar in Almagro. It was quite a challenge, but it was nice.

Then, later on, the same bar hired me to come back and paint Sandro — totally different vibe. Painting a person is hard. Anatomy, faces, it’s really complex. Painting a plant, or a dog, isn’t the same as painting the face of a nationally recognized figure. Because any person who walks into the bar has to see it and go “This is Sandro.”

Did you ever study art in school or college?

At the time when I started getting gigs, I was studying graphic design at the University of Buenos Aires. I did two or three years and then dropped out, because I wanted to do something else. I felt like what I was doing wasn’t really fulfilling for me, what I needed was to go out there and do, and already be working doing what I liked.

I was really stoked on that idea. I dropped out of college, my parents obviously weren’t very happy, because it was kind of like a radical change all around. And I started making t-shirts, t-shirts with screen printing, which I liked because it kind of went along with stenciling, and kind of mixed in with everything — design, advertising, which was related to graphic design, and I was able to sort of bring all those skills together into one thing.

How did you start to travel painting murals?

We ended up going on a road trip with my brother and his dog, two and a half months on Route 40, which is the highway that goes from La Quiaca to Ushuaia, in an old ’67 truck. And that’s when I started painting at campgrounds and in hostels, in exchange for staying there, and I got really excited about it. I was like, “No, this is what I like. I don’t want to make t-shirts anymore.”

I started going to meet-ups for muralists and meeting people. At that point in time, because I was just out on my own painting, I was in my own little world. I didn’t even know how to offer a quote for my work. But I started to meet other people who were doing the same thing I was, who had totally different styles of painting and used different techniques, and that sparked my curiosity and inspired me.

So, I kept searching for my own style, which is something that even today I struggle to find or to continue. I tend to like to experiment with new colors and styles, and not always stick with the same pattern.

Last year I spent 8 months on an island in Brasil, where I was painting murals in exchange for housing. I just showed up and showed them what it was I did. I knew that other people had also stayed at certain hostels or campgrounds in exchange for mural art, so I was like, well, I can do it too. And it worked out. It’s always good to have contacts related to muralismo, because it gives you a leg up as far as finding places and meeting people in other parts of the world.

A few years ago I remember hearing about an iniciative that came about in response to the fact that a ridiculously large percentage of muralists commissioned by the city are men. What do you know about that?

Yeah, it’s called Agrupación de Mujeres Muralistas de Argentina, “AMMURA.” It started as an iniciative to defend the labor rights of women by seeking visibilization of women within the muralismo industry. Whenever jobs for muralists would be announced at one or another meet-up, the majority of those selected were men, and on top of that, they were paid more. Or for state-sponsored jobs, like painting bridges or tunnels, they would always hire men.

It was cool because it started to go viral throughout several countries, not just in Argentina but in Brazil, Uruguay, Chile, and that was awesome. Because sometimes you don’t realize what’s going on outside, and then you see that there’s a ton of us seeking respect and professional and labor equality.

When did you start with the pets?

Quarantine. Pandemic. It took some figuring out. I had already been doing animals, I always liked to, and I asked myself, “How can I work from home?” Because I’m not going to be able to do murals.

And I was like, well, I can sell stuff from my house, send it out, something like that. So I decided to focus on pets: dogs, cats, whatever. I started advertising a lot. It wasn’t easy at first, like any business. And also, it’s a line of work that’s already really saturated. If you do a search online, there’s thousands. I was surprised that I started to get consultations and all that, but I was happy about it.

It’s something I like to do. Deep down I wasn’t like, super happy, like how I feel when I’m painting murals. It’s not the same. You’re not relating to people as openly, you’re not in contact with the community. But anyway, in spite of the situation that was playing out, I was able to make ends meet.

Where does the name Taty No Duerme come from?

My real name is Ana, Ana Julia…[laughs] totally unrelated. When my siblings were little they would call me Taty, because supposedly that was the first word I said. I started introducing myself as Taty, I never identified with Ana, so the nickname stuck. Taty.

So then, aside from that, there’s a Spinetta song called “Ana no duerme,” so it came out of that, my first artist nickname was Ana No Duerme, but it was so well-known, I mean, if you searched the internet the song would come up immediately. So then I said, “Wait a second, nobody even calls me Ana, I’m going to be Taty.”

So that’s when it became Taty No Duerme. Also, I identify with the song. It’s not that I don’t sleep, but, I always like to be active and I try to not sleep on things or rest on my laurels, as they say. I try to not sleep and be out there doing what I like to do.