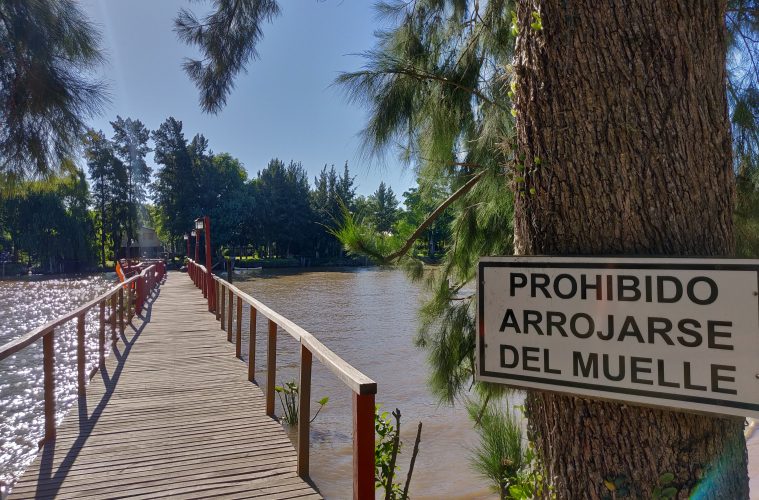 My Week in the Delta

As far as Jon and I could tell, Cabina “Fantasy” was the last decent cabin available in Tigre for the week following New Years. We had initially considered a resort-style bed and breakfast, but after reading a lengthy list of all that the establishment did not offer (such as guaranteed electricity) and weighing the hazards of a shared pool (would there be screaming children or couples pawing at each other?) we decided to bite the bullet and reserve via AirBnb, knowing that we were paying for our lack of planning with the inflated USD rates.

The cabin had two bedrooms, a large yard, and a private beach with pine trees towering over the sand. It seemed to be exactly what we were looking for: a quiet getaway for two people who had felt too overwhelmed by the prospect of more serious travel during an ongoing pandemic to make more ambitious plans. Even so, certain aspects of the trip were — as a well-meaning friend had put it — “risky.”

For one, Jon and I didn’t really know each other. He had led a mindfulness class in the middle of the lockdown, and sent a kind email afterwards asking for my therapist’s contact information. We had followed each other on Instagram, and occasionally commented on each other’s posts and stories. But “friend” at that point would’ve been a generous label. Planning the trip via zoom calls, we didn’t meet in person until I had already paid the reservation, making conversation on a park bench in Belgrano and feeling each other out for potential red flags. Satisfied that neither one of us was a serial killer, we bid each other adieu until the delta.

“It’s been such a weird, hard year — why not?” I said, self-justifying aloud to a close friend. “And we share a therapist. It will be fine.”

The truth was, I needed this trip. 2020 was a brutal year for everyone — and I recognize the privilege of emerging from its turbulence relatively unscathed. But I had overworked myself to exhaustion, leaving the security of a steady job to work freelance 50-60hrs a week mid-year. With my housemates we had endured 8 months of constant demolition and construction as our landlord built new floors over our P.H., depriving our patio of the little sun we had (and filling it with dust and debris to boot). Dear friends moved away forever mid-lockdown, without even the chance to say goodbye. I was nursing a broken heart and slowly healing from the inside out. And for months I had been recording bits and pieces of music that I had yet to give the time to grow into more complete ideas — an exercise in delayed gratification mixed with frustration and self-loathing.

In my near decade of living in Buenos Aires, the delta has alway been a mystical place for me — something about its geographic ambiguity, the murky merging of the river and forest feels oddly fertile and healing. I have shared many joyful, magical moments with friends and partners there over the years, but had never savored its peace for more than a weekend. A full week would give me time to write and compose. I would swim and read and cook. I would do “nothing,” which in the parlance of our productivity-driven time, translates to “nothing generating income or potential future income.” I would attempt to rest and disconnect.

I teeter precariously as I board the lancha, my multiple bags of fruits, veggies, coffee, granola, cheese, and legumes swinging back and forth as I sweat under the weight of my duffel bag and backpack. The boathands help me get safely below without incident, and I try to condense my belongings into as little space as possible. As the boat passes the Parque de la Costa ferris wheel and then the Puerto de Frutos, I resist the urge to take off my mask and inhale deeply as we cruise deeper into the wetlands. The earthy sweetness of the delta air penetrates the cotton fibers anyway.

I am greeted on the dock by Jon and Nora, a brusque, formidable woman in her early 70s whose wardrobe reveals itself to consist entirely of swimsuits, plunging halter tops, and fiercely high-waisted, flowing cotton pants. “Greeted” is a bit of an exaggeration in Nora’s case — she waves at me while on the phone with a potential guest for the cabins she owns and manages (in addition to her neighbor’s, which Jon and I are renting). “No, enero imposible. Febrero tampoco los findes. Durante la semana puede ser.” Jon helps me carry my things inside, where we unpack and settle into each other’s company.

The daily routine goes something like this: every morning I wake up to the sun illuminating the faded curtains on my window. I make coffee with the ancient and erratic stovetop espresso maker — a daily struggle that only gets more fraught as the week goes on. I set up with my midi keyboard and computer on the front porch or the picnic table. Jon reads from the beach. I work on songs until the heat becomes unbearable, and then I swim. I shower and work on music some more. We are occasionally interrupted by the sudden appearance of various dogs and cats, who are given free rule of the island. One cat in particular repeatedly settles on top of our refrigerator, or on top of my dresser. He knows we are just tourists, visitors of little consequence.

After the sun sets and the mosquitos pick up their frenzy, we retreat inside to cook dinner. We open a bottle of wine with dinner (sometimes mid-preparation) and finish it while we gaze at the stars on the back porch — an impossibility only an hour away in our respective city apartments. Sharing a therapist gives us a false sense of camaraderie that soon gives way to the real thing. We talk about our families, our past relationships, our hopes and dreams. We talk about the perils of our time: economic inequality, political turmoil, internet dating. We share our neuroticisms and laugh at each other. “What would [our therapist] say about that?” We speculate about the secret life of Nora, inventing ridiculous backstories and lurid love affairs.

I’m not quite satisfied with our imaginary narrative, and decide I want to know Nora’s real story. Spotting her waiting by the dock one day, I approach her under the pretense of asking about the river. The water has retreated by 10 meters or so since I arrived, and I can’t make sense of the tidal patterns. “It’s all in the wind,” she says. “The tides cycle every 12 hours like the ocean, but the winds push the water up river or down depending on their direction.”

I want to know more. “What about the docks. Do they change name from owner to owner? Was this dock always called “Fantasy?”

“You can change it,”says Nora. “But then the lanchas won’t know where you live. So most of us keep the name.”

The dock names aren’t the only ones to carry weight in the delta. “People know me for my family.” says Nora. “So I used to clean people’s houses during the week to make ends meet and save money. I’ve lived in the delta for over sixty years. Grew up here. Went to school every morning on the lancha as a little girl.”

Her family’s property was originally bought and settled by an Italian immigrant in the 1930s, then one of the many peach and citrus farms blooming in the swamplands. After years of significant flooding and the emergence of more competitive fruit markets, the delta declined as an agronomic player and began to emerge as a tourist destination in the middle of the 20th century. It was during this transformation, in 1956, that her grandfather bought the property in which she now lives and rents her own cottages.

I confess that part of the reason I’m asking all these questions is that I grew up on the Great Lakes, that I come from a long line of people who loved and lived on the water. That maybe I would like to buy a little house out here someday myself.

Nora smiles widely at this. “It’s a beautiful place. I wouldn’t live anywhere else. But you have to be careful. There are tricks you have to watch out when you buy here: ‘waterfront’ properties whose streams dry up with the shifting waters, for example. And once you do buy, a few bad things will happen to you — it’s inevitable. You’ll forget to bring in your deck chairs and the waters will surge with the wind and wash them away. I always keep a rowboat tied up out the back. This whole dock can get flooded, and if you don’t have a little boat then you’re stranded. These things are the derecho de piso — the price of entry.”

My derecho de piso for our week-long stay happens the following day, when I spot one of Nora’s guests, Lili, doing her morning stretches and pliés on the dock. While Lili’s traveling companion Loli would drink beer and dance “with me” from her dock to the Todd Rundgren and Marvin Gaye blasting across the water from my bluetooth speaker, Lili is a bit more refined. A gracefully aging ballerina turned tango dancer, she studied classical dance at El Colon for a decade, followed by another decade of contemporary dance at Escuela de La Danza. “I once performed in Swan Lake” she confides upon meeting me, an impish smile alighting upon her face as her former glory days play out in her eyes.

Intercepting her mid-stretch, I beg her to let me attempt to follow her movements. She generously agrees, but after several minutes of repeatedly correcting my collapsed abdomen and tense shoulders — “las piernas te sostienen, no los hombros” — she switches over to an exercise in eutony, a sensory awareness practice meant to reconnect oneself with their body. Several boats go by as she lifts my legs and moves them from side to side. I laugh as the passengers gawk.

Sadly, my sensory awareness exercises don’t heighten my mental awareness, and I remember too late that I had left the espresso maker on the stove. I re-enter the cabin to the acrid smell of burnt rubber seal. The coffee is ruined and I spend the next hour trying to find a way to get Jon a half decent cup (I fail miserably). He graciously makes himself a tea instead, and we settle in for our last couple of days — I build a sandcastle one morning, a fire one evening, and then our time on the island is over.

On the lancha home, I watch all the “en venta” signs carefully, considering each house as we slide past. I think about Nora and her little house on the island, how she confessed to me that her happiest years were those spent there alone after her city-loving husband died. I think about the city that waits for me at the end of my journey back. I think about the last year, the ebbs and flows of my emotional tides. I think about the life I am trying to create for myself, and what might surge up next, threatening to wash it all away. I vow to build myself a little rowboat to tie up out back.