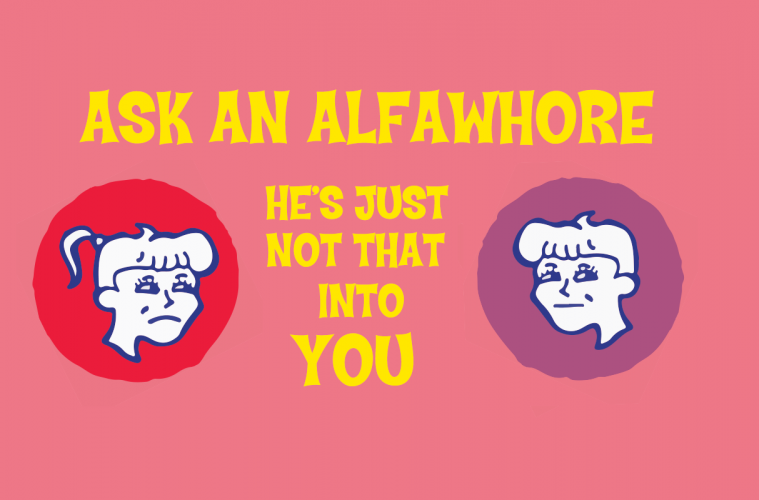 Ask an Alfawhore | He’s Just Not That Into You

I’ve been seeing this dude for a year and the relationship seems to be going nowhere. I know I want to be with him, and when I asked him if he liked me, he said yes, but then pretty much everything else that happens counters that statement. We’ve seen each other twice in the last two months. I suggested we went to a (socially distanced) concert to hang out, and when we couldn’t get tickets, the hanging out part was dead in the water.

What should I do about this passive rejection?

I know it’s not a very formal opening, but the truth is that dating someone and having it be a bust is objectively a bummer. It’s even more of a bummer when they say they like you and then proceed to act in a way opposite to that statement—but you know this, and you don’t need me to repeat it.

Let’s get on with the reason why we’re here, then.

I’m going to very briefly suggest talking to him, simply because he is saying he likes you, and I think points should be given for that. I don’t believe that’s a statement people tend to say lightly, and so if he’s saying it, then there’s probably something there. However, I do not know the circumstances in which he said it, and what he was feeling at that moment. Perhaps he felt he had to. Perhaps he felt lonely. Perhaps he thought it would just be forgotten.

Perhaps he genuinely felt it at the time, and then simply proceeded to not feel it anymore. Feelings, sadly, have a knack for working that way. And sometimes it’s a bummer.

When people like you, when someone chooses you, they make time to see you. Against all odds. Against the nastiest of schedules. Sure, there are times that are busier than others, we all have obligations. But there’s a limit.

What you’re feeling right now is a mixture of sadness, because it didn’t work; anger, because he couldn’t be bothered to be straight forward; crushed expectations, because you chose to hope and those hopes didn’t pan out, and maybe, perhaps… a bit of hurt pride, as you gave everything you had to offer and somehow, it was not enough. It was not right.

You are enough. You are right. You just weren’t right for him.

However, what’s most important, he wasn’t right for you either.

You may think he is right now—after all, you still want to see him, you still want to get back with him. But no matter how great he is, how much he makes you laugh, how great the sex is—someone who doesn’t want you is someone who, by definition, is not enough. And this not wanting has nothing to do with who you are as a person. Think about your best friends, for example. You’ve met many people in your life, I’m sure, but how many do you consider your best friends? And these people, these best friends, I’m positive they have many amazing qualities, but they’re not the only amazing people in your life. They’re simply the ones you feel drawn to. It’s nobody’s fault—sometimes that spark is there, and sometimes it simply isn’t. And sometimes it is—but it’s one-sided.

Does that hurt? You betcha. But you don’t really want someone who doesn’t want you, do you? You don’t want to convince someone to be with you—you want them to choose it freely, out of all the options in the world, with a smile on their face. Don’t you?

So you see, it’s quite easy. It’s impossibly hard—but also, quite easy.

Lick your wounds, my dear. Get some ice cream, cry it out, hang with your friends. The most beautiful thing is that the ache does dull with time.

‘Til the next time, friend,