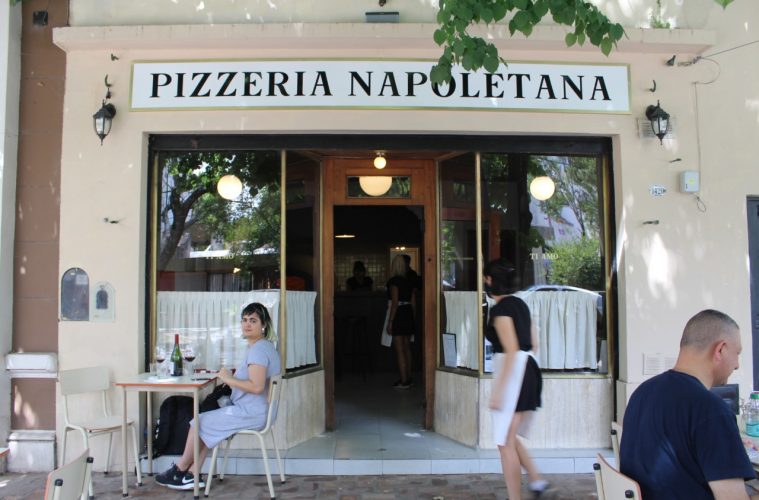 Around this time last year, I sat down with editors Evy and Monique to talk about an idea to build an annual map of 100ish essential Buenos Aires restaurants. Between January and March of last year I dined out 45 times, which included chasing down the best sudado across Once, Parque Patricios and Paternal, impromptu empanada frita and pastry tours and comparing new East Asian fusion spots against decades old Japanese, Korean and Chinese restaurants, all that according to a Google Doc titled “Shit I Ate 2020.” The spreadsheet abruptly stops in mid-March.

When we went into mandatory lockdown, the food industry braced itself for tragedy. While 2020 was certainly a complicated, often sad and confusing year, it was also a moment reshaped by resilience and reinvention. This list isn’t a ‘Best of’ — that would be a silly proposition — not only because the amount of times I dined or ordered out was severely limited by pandemia economics and geography, but also because 2020 was a year about collaboration over competition. Instead, this is a very personal compilation of restaurants and independent projects (and a lot of pizza) that brought me joy in a year in which we all needed it most.

Daniela López Camino and Mauro Busquet Moriconi met each other years ago in a cooking class. Both have long run their own projects — she makes a variety of sauerkrauts, kimchi and hot sauce with her aptly-named La Fermentadora; he bakes sourdough, focaccias and other fermented breads with Fornole, named after his ancestor’s hometown in Italy. Together they began leading classes centered around, you guessed it, fermentation, and since June have begun making pizzas together, sold twice monthly out of their Villa Ortúzar fort. Recently, they installed a wood burning oven on the terrace and neighbors are crossing their fingers that FF Pizzas becomes a pizzería del barrio. The pair’s individual sensibilities are on full display — the dough has a delightfully dense chew and a deep sourdough flavor that is highlighted by pops of loud fermented nuts and vegetables and the fresh pops of flavor from the mostly organic ingredients. And despite López Camino’s aversion to muzza, the duo makes a really good one, probably because of the touch of pesto spritzed on top. Get risky and order the Jardín Secreto, a kaleidoscope of edible flowers, fermented onions and cilantro that sit atop creamy goat cheese, or the Hit, a vegan version with a laborious almond ricotta and charred tomatoes. To order, stay tuned to their instagram, where they announce upcoming pizza events and menus.

I am obsessed with Gordo Chanta, but not as much as pizza master Juan Carlos Ortiz is with making pizzas. When the pandemic hit, the team behind La Favorita Cantina in Palermo began experimenting with pizza under the indisputable, perfectly named Gordo Chanta with an emphasis on small daily productions, seasonal ingredients and independent producers. It makes sense for the crew — Favorita has stuck out for playfully reinterpreting porteño lore and the city’s most ubiquitous dishes. Still, pizza was new territory. Pizzas are defined by their never-ending search for local ingredients and small producers. Ortiz searched high and low for the perfect flour before settling on an independent flour maker from Bahia Blanca and likewise builds weekly specials based on whatever seasonal ingredients pique his interest, like a recent pie topped with zucchini flowers or radicchio and juicy oranges. For now Gordo shares the space with Favorita, meaning you can and should combine your order with some empanadas: chopped beef in a vibrant tomato sauce that comes with a creamy, chipotle-leaning hot sauce. And be sure to take advantage of their curious selection of boutique wines, like Pet Nat Pinot Noir by Pintom, Semillon by Puercoespin or a Criolla by Criollaje.

Naranjo isn’t a place that you just stumble into. The venerable Chacarita almacén and wine bar attracts a crowd in search of natural wines and simple platitos made with agroecological and organic ingredients collected from all over the country. When you enter the bar, you are immediately welcomed by a wall of wine that comes in every color and variety: golden sauvignon blancs, bubbly rosados, cherry colored criollas and dark red garnachas, to name just a few. Cook and owner Nahuel Carbajo will excitedly guide you through all his treasured wines and help with the food pairings. Don’t pass up on the spiced olives, delicate mackerel with olive oil or the cabeza de chancho served with crusty sourdough.

Gloria del Fogón and Damián Blanco met each other in culinary school and worked together in bars and restaurants across Buenos Aires while developing their global-inspired, sometimes Argentine, sometimes Venezuelan Trashumantes pop-up. The duo are a perfect compliment; Blanco has a natural knack for baking and pasta and Fogón a wild take on sauces and comforting soups. When COVID forced them to postpone a move to Germany, the duo began selling food out of their residential kitchen, beginning with their emblematic pasteles, a savory fried pastry native to the Venezuelan Andes region. Fogón’s eye-catching presentations are immediately arresting: arepas and Japanese milk bread decorated with herbs and flowers or creamy black rice transformed into natural landscapes with the help of mountainous romanesco, lemongrass and topinambur. The duo is currently planning out their 2021 and my fingers are crossed for a full calendar of summer pop-ups.

For Capital dwelling pizza lovers, Ti Amo is a pilgrimage, and in these times not a particularly easy one. Nestled on a leafy street in Adrogue in the suburbs of Zona Sur, Carola Santoro works the pizza oven while her mother Susana and sister Vicky run the dining room. The pizza-obsessed family frequently traveled, and everywhere they went they tried the local take on pizza, their favorite being napolitana style. A few years ago, Carola decided to teach herself and built a pizza oven in her mom’s backyard to cook for family and friends. She quickly realized that the work it took to build a fire and heat the oven wasn’t worth making just two or three pies. The family opened their backyard on the weekends before launching their brick and mortar in August, which they open Thursday through Sunday nights. Santoro has a talent for leaning heavily onto classic Italian flavors, like pesto and parmigiano or mortadella with pistachios and ricotta, but my heart will always steer me to the cuatro quesos with drizzles of honey.

Although everyone was talking about the opening of Christina Sunae’s Filipino-inspired Apu Nena, her flagship Cantina Sunae was my choice for special nights filled with puffy bao buns stuffed with shredded pork adobo, crackly vegetable lumpia and khao soi, delectable coconut-flavored yellow curry with chicken and mustard leaves. On particularly decadent evenings, kare kare offered a jubilant plate full of shrimp, calamari and clam tucked into a peanut curry or tiyula itum, braised beef that is pounded down with a thick ginger and burnt coconut sauce.

Despite a large population of Paraguayans living in Buenos Aires and the conurbano — the largest Latin American population across Argentina as a matter of fact — there is a noticeable absence of Paraguayan food in the city. The best Paraguayan food, apparently, is cooked at home. Cook Gladys Martinez is originally from Ciudad del Este. When her husband, Luis Benitez, had difficulty reopening their Retiro restaurant-bar during quarantine, she began putting together boxes of dishes typically associated with holidays and festive get-togethers alongside daily staples. Martinez works out of her Longchamps home and Benitez delivers around Zona Sur and the city’s south side, aided by his sister, Ruth, who helps out with social media. Food is made fresh every single day, and if you’re lucky enough to be early on the delivery route, your rations will be delivered warm out of the oven — tubular croquettes made from minced beef, cheesy mandioca empanadas and payagua maskada, fried cassava cakes stuffed with ground beef. Classic chipas, chewy and fragrant with pops of anis, are the perfect accompaniment to a midday mate. If you opt for a box típico, you can also have dinner covered — chipa so’o, a flakey cornbread stuffed with more beef, and sopa paraguaya, spongier and melted down with lots of queso fresco. Orders are taken a day in advance.

It is difficult to imagine a more perfect brewery than Strange. The Colegiales microbrewery put sours and pilsens on the map in a city with a strong allegiance to IPAs and introduced a menu that pushes beyond the boundaries of papas bravas and cheeseburgers. During the pandemic, Strange has ebbed and flowed with the crisis of the moment — opening early to offer specialty coffee and delivering their exquisite tubos all over the city. In its current inception, the brewery offers ample sidewalk service that starts at 1pm. For neighbors, it’s the perfect spot for a casual lunch of beef tacos with salsa verde or a veggie-friendly boniato sandwich to accompany a book and some beer. Head brewer Tor Hoset has an affinity towards crisp lagers, which on my last visit came in the form of Tiempo de Valientes, with soft punches of pomelo-y citrus, and Agua Bendita, a refreshing, slightly creamy beer perfect for the afternoon. When things return to “normal,” my fingers are crossed that my daytime beer escapes remain part of my weekly routine.