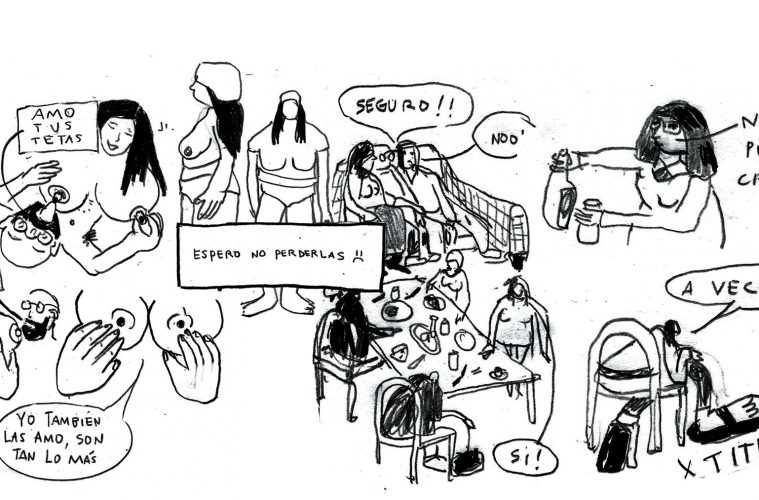 Welcome to the first Ltd. Edition of 2021! It is a difficult start to the year, leaving behind the most difficult year in recent memory and hoping that the symbolic power of the calendar change will purge all the evils that befell us in 2020. And though it’s true that starting a new year is not going to magically save us, in Argentina we had one last collective joy at the end of 2020 with the senate’s approval of the abortion bill, a victory for the fight of feminism which signals a slightly more optimistic horizon; a new right conquered and made into law.

In this spirit of catharsis, celebrating the conquest of bodily autonomy in a time when all we seem to be is receptacles of deadly viruses condemned to confinement to survive, it feels apt to use this corner of independent illustration to recommend Berlin Grafik’s Historia de Tetas calendar. This release came to accompany us during 2021 with small stories about local illustrators, and the ups and downs of their relationship with their breasts.

The project was spearheaded by Cristina Gutiérrez, known for years in the fanzine and illustrator circuit as Titihoon. Not only is she an artist, but she also works as an architect and editor at Berlin Grafik, a printing company that has also served as a hub for illustration workshops and exhibits. In an email exchange, we were able to chat with her about the impetus behind the calendar and the dissemination of the stories about the breasts: “After a breast cancer diagnosis in 2018, I experienced an invasive process which caused me to very quickly change my perspective on life. Today I am healthy thanks to an early diagnosis (as my oncologist would say) and convinced that venting pain through drawing was like a superpower that helped me face the ordeal.”

The graphic medium is extremely powerful and effective as a vehicle for personal testimonies of everyday life, mixing poetry with documentary. The emotional whirlwind of her diagnosis not only led Titihoon to capture it in her art, but also motivated her to look to other illustrators to examine their own relationships with their breasts. “With this testimony, my experience, I began to feel curious about other stories about breasts, beyond just the oncological: maternal stories, stories of complexes, sizes, differences. Thus, the idea for the calendar was born. I summoned a group of illustrators, and I was very moved by how they immediately joined in, highlighting the need we all have to talk about our breasts.”

And so “with a little help from her friends,” Titihoon put together a constellation of illustrators overflowing with talent: The power girl trio that make up the studio In Bocca al Lupo (who published the phenomenal anthology of Argentine authors PIBAS), Sole Otero, Cami Torre Notari, Gabicoco, La Watson, Caro Chinaski, Fulana Who, María Luque, Julia Barata, Agus Casot and Nacha Vollenweider all join her in sharing their personal relationship with their breasts, relating illustrated stories where tits are the protagonists of the desire or judgment of others; sources of joy or pain depending on circumstance. The team is rounded out with Mariana Ruiz Johnson as the cover illustrator, Victoria Rodríguez adding stickers, and Flor Coll (editor of Femiñetas) writing a prologue to the calendar.

This collaboration didn’t just result in this calendar, but also extended beyond that to become a book (the first to be fully published by Berlin Grafik): “From putting together the calendar, we started assembling the project by adding more authors and opening the proposal to non-illustrators. It began as a fanzine that would accompany the calendar and ended up being Historia de Tetas, which will soon come to light in the form of an anthology book with more than 100 stories narrated in first person by illustrators but also from the point of view of marginalized voices, of maternity, different professionals such as writers, anthropologists, models, sociologists, doctors, poets, photographers, architects, singers and DJs putting together playlists to dance topless to.“

The spark that began as a calendar ended up spawning a network of stories and comics that will include a hundred voices ranging from teenagers to grandmothers, from locations ranging from Singapore to Seattle and more. From this little corner of La La Lista we hope that 2021 will have more of these dialogues to celebrate the power of our bodies, and less of the uneasiness caused by waiting indefinitely to return to what we knew as normal. Titihoon expresses it very well in her battle cry: “As Angela Davis says, we have many ways of directing our art towards radical social change. These are our tits and we are the only ones who speak for them, this is our revolution!“